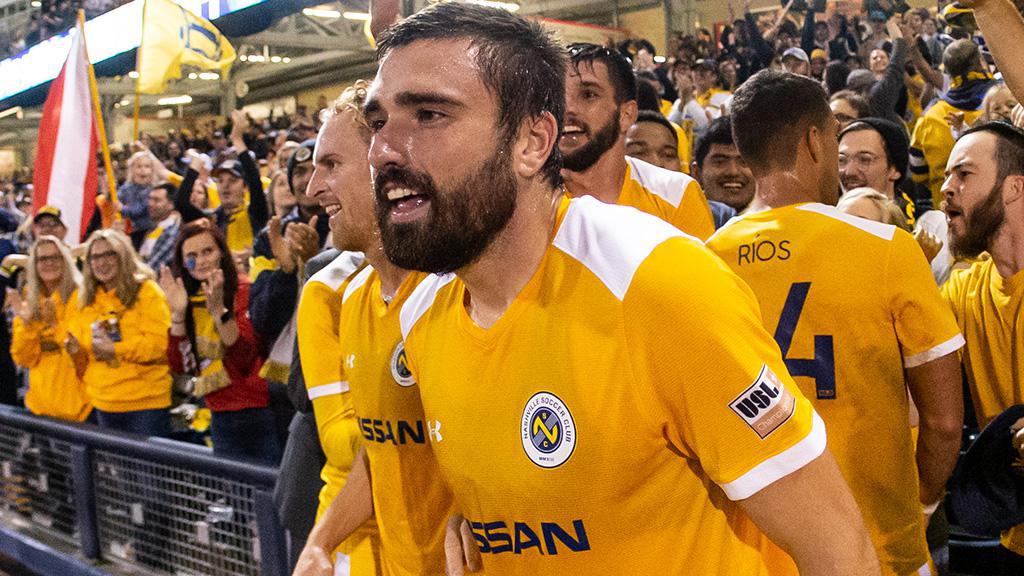 LOUISVILLE, Ky. – Louisville City FC added another big name to its back line on Thursday as it signed defender Jimmy Ockford for the 2020 USL Championship season.

"We are excited to add a player of Jimmy's quality to our roster,” said LouCity assistant coach Danny Cruz. “We believe his strong presence and winning mentality will be a great addition to our back line. We are looking forward to getting him integrated into the group to help us push toward our goal of winning another USL Championship Title."

Ockford, who played at Nashville SC last season on loan from the San Jose Earthquakes, is a powerful center back who helped lead Nashville’s stout defense during the 2019 season.

The strong 6-foot-1, 185-pound back will join a LouCity squad that returns center backs Alexis Souahy and Sean Totsch and defenders Oscar Jimenez, Pat McMahon and Akil Watts. Ockford has a history of success in the Championship, including a standout season with Reno 1868 FC in which he led the expansion side to a third-place finish in the Western Conference that led to his signing with the Quakes the following offseason.

“When I first heard Louisville City was interested in me, I knew right away it would be one of my top options,” Ockford said. “They’ve been in the USL Championship Final the past three seasons and have won two championships. I want to be a part of winning a championship with them. I’m hoping I can bring some extra enforcement to the defense and solidify the back line. The goal is a championship in 2020.”

HAWORTH JOINS THREE RETURNEES IN INDY: Indy Eleven announced on Friday the arrival of former Ottawa Fury FC captain Carl Haworth, who joins a squad that will also include returning defender Mitch Osmond and midfielders Lucas Farias and Macauley King, each of whom had their contract options exercised.

“I am very excited to be joining Indy Eleven. Once the opportunity came along, I couldn't resist,” said Haworth. “It's a club that I've admired since it started, and I cannot wait to be a part of it. Indianapolis is an amazing city and is deserving of a championship, which I hope to help bring and celebrate alongside the Brickyard Battalion in the coming years.”

The Canadian veteran is joined by Osmond, Farias and King, all of whom featured as Indy reached the Eastern Conference Final of the postseason in November. King led the trio with 22 appearances during the season and had one goals and three assists in his rookie season, while Osmond became a fixture on then club’s back line in the second half of the season. Farias saw his season cut short by a knee injury, but had recorded three assists in 13 appearances before that setback.

“With the return of Lucas, Mitch and Macca, we bring back three players who emerged as solid contributors for us in 2019,” said Indy Eleven Head Coach Martin Rennie. “All three of these players are on the upside of their professional careers, and we’re excited to have them build their quality and consistency here with us in 2020.”

Indy also announced four players from its 2019 squad – Alioune Diakhate, Nico Perea, Gabriel Rodrigues and Eugene Starikov – would not be returning for the new season.

“I’m really happy to be part of Phoenix Rising,” Konor said. “Solomon Asante has been telling me a lot about Phoenix Rising, especially the supporters. I can’t wait to give everything to the club and the fans.”

Kontor most recently played with fellow USL Championship side Orange County SC. In two seasons with the club, Kontor appeared in 40 matches playing a total of 3,171 minutes while tallying two assists.

Prior to his time with Orange County, Kontor spent two seasons playing in the Greek Super League (first tier) with AEL from 2016-2018. He appeared in 19 matches and played 1,475 minutes. Kontor also has competed professionally in Serbia and Ghana.