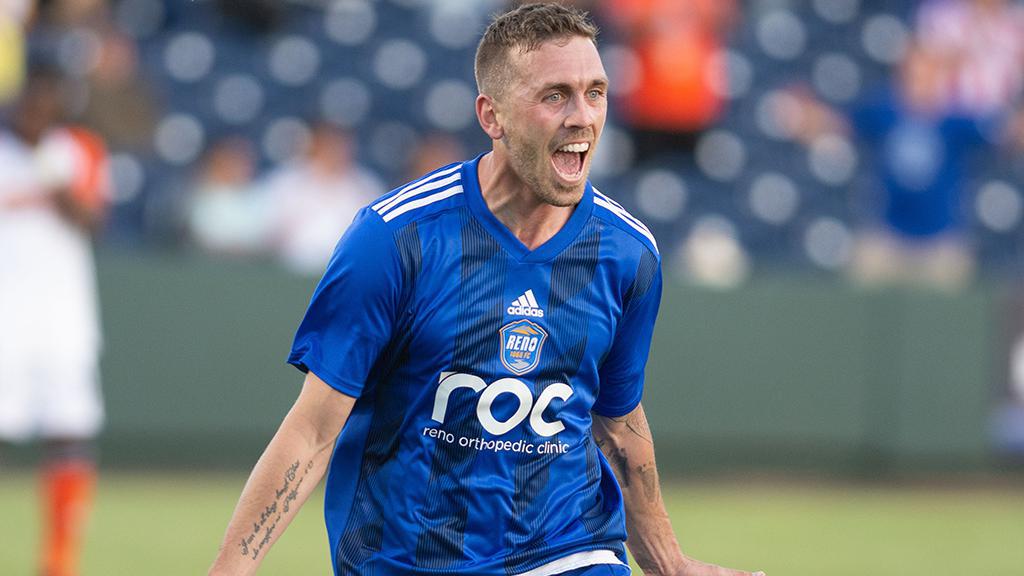 Corey Hertzog scored a single-season high 18 goals to earn his fourth selection to the USL Championship All-League Team this season, and will be back with Reno 1868 FC for the 2020 campaign. | Photo courtesy David Calvert / Reno 1868 FC

RENO, Nev. – Four-time USL Championship All-League selection Corey Hertzog was among three players announced as returning to Reno 1868 FC on Tuesday as the club continued its offseason personnel moves. Joining Hertzog in returning to the Biggest Little City in the World are midfielder Sam Gleadle and defender Yosimar Hernandez.

Hertzog had a career year in 2019 with 18 regular-season goals that saw him earn Champions All-League Second Team honors. The 29-year-old is currently the fourth-leading scorer in the Championship’s history with 62 regular-season goals, while this past season he also registered six assists and 40 key passes in helping Reno to its best finish in the Championship’s Western Conference in its history.

McCRARY RE-SIGNS WITH REPUBLIC FC: Sacramento Republic FC announced it had re-signed versatile defender Jordan McCrary as the 26-year-old returns for his second season with the club.

“Jordan was voted by his teammates as the club’s Defensive Player of the Year for 2019, and he earned every bit of that respect,” said Republic FC General Manager Todd Dunivant. “He brings a relentless tenacity to the back line and we’re extremely excited to have him return.”

McCrary made 29 appearances in the Championship, and 32 in all competitions, all of which were starts, and led the team in interceptions (43), tackles (71) and tackles won (39). McCrary also recorded a pair of assists during the campaign as he helped Republic FC earn its sixth consecutive trip to the USL Championship Playoffs.

The club also announced it had declined contract options on goalkeeper Angel Alvarez, defenders Bryan De La Fuente, Kevin Garcia Lopez and Christian Torres, midfielders Pablo Cruz, Panzani Sousa and Victor Rojas, and forwards Sammy Ochoa and Irvin Parra, while the contracts of goalkeeper Adam Hobbs, defender Mobi Fehr, and forwards Tabort Etaka Preston and Jose Villarreal expired at the end of the season. However, Lights FC added it was currently in active discussions with several of these players about returning for the 2020 USL Championship season.

“We are very excited about the coming season and the base of players returning next season,” said Lights FC Manager Eric Wynalda. “Several other players from last year’s roster are still in our plans, although we haven’t taken their options as a part of a contractual restructuring phase that was necessary. We are hopeful these players continue to play for Las Vegas Lights FC, those announcements will be made at the appropriate time. For those who won’t return, we thank them for their service to our club and wish them success in their future endeavors.”