LouCity’s Addition of Bone Sets Tone for a Memorable Offseason 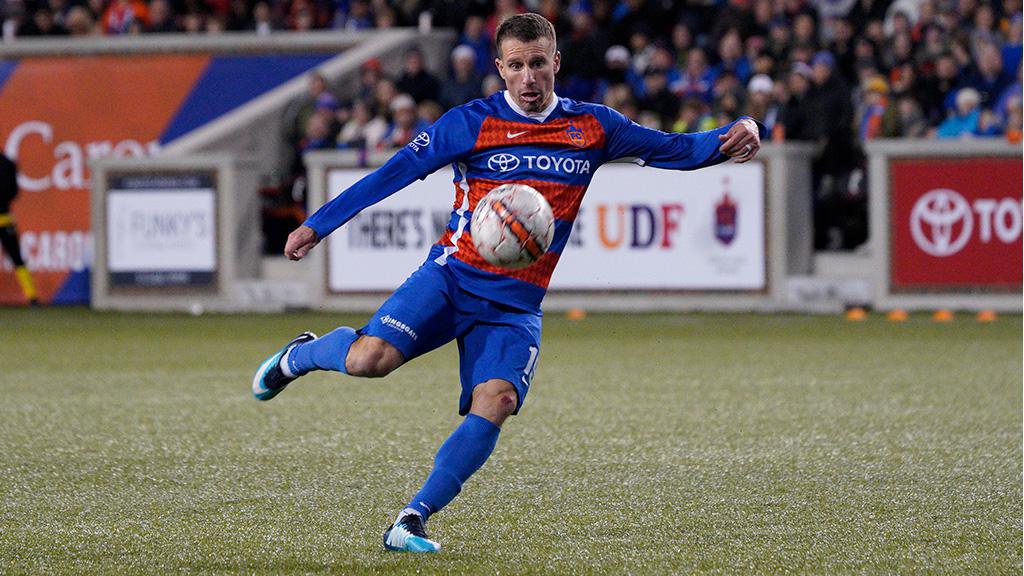 If you’re a Louisville City FC fan, the last couple of days will have done well to ease the pain of the club’s loss in the 2019 USL Championship Final.

Why? Because in the course of just (insert number) days, the club has already announced that sixteen players from last year’s squad, including 10 starters from the Championship Final, and 2018 USL Championship All-League selection Corben Bone are already under contract for the 2020 season at Lynn Family Stadium?

That will do nicely.

If it wasn’t clear already, the club’s new stadium – to go with the reputation LouCity has built organizationally over its first five seasons – is going to be a major selling point for players entering free agency. That may apply especially to those like Bone, who just turned 31 years old and will be looking to end his career on a high note before hanging up his boots.

“I am so excited to be joining such an incredible organization in Louisville City,” said Bone in the club’s press release announcing his arrival. “The club has established itself as one of the top soccer organizations in the country and continues to be one of the cities that is raising the bar for soccer in North America. I’m proud to be joining a special group of players and coaches and I can’t wait to get started.”

If you’re a Louisville fan that remembers Bone’s outstanding 2018 season – which included him scoring the winner in a torrential downpour in the final regular season meeting between LouCity and FC Cincinnati – today’s news could bring about belief that the club had added another potent attacking weapon to its midfield.

You may want to temper those expectations, for as fine a player as Bone has proven to be in his time in the Championship, last year’s campaign was very much an outlier.

In fact, Bone’s 12 goals across the regular season and playoffs in 2018 account for three-quarters of the goals he has scored all-time in five seasons in the league.

But that’s not to say this move won’t be a major plus for Louisville. The biggest quality Bone brings – his ability to orchestrate and distribute through the middle of the field – is one that will fit hand in glove with Head Coach John Hackworth’s style of play. LouCity led the league in possession in the 2019 regular season at 58 percent and adding a player that had a passing accuracy rate of 84.6 percent over 47.6 passes per 90 minutes in his last two seasons in the Championship will only make Louisville more efficient in possession and in transition.

Louisville fell in the final in part because Real Monarchs was able to control the midfield. Corben Bone should go a long way to boosting that area of the park. #USL https://t.co/aqRCDEZRFq

Putting his versatility alongside former rivals like Speedy Williams, Niall McCabe, Magnus Rasmussen and Brian Ownby not only offers Louisville another tactical option, but also the sort of depth that will allow the club to compete strongly in the league while looking to emulate its run in 2018’s Lamar Hunt U.S. Open Cup without a drop in quality in the starting lineup.

“Throughout his career as a creative attacking player, he has shown that his quality on the ball, coupled with his decision making and competitive mentality, has allowed him to be an influential player,” said Hackworth in a club statement. “We are excited to add a player of his caliber to our roster in 2020.”

Bone’s arrival could also be a portent of things to come for Louisville. As the offseason kicks off in full, more and more players with high-level Championship resumes that either competed in the league this past season or – as in the case of Bone – spent time in Major League Soccer are set to become available.

There will be plenty of competition for those signatures, too, with the potential for ambitious clubs to propel themselves to the level that Louisville currently finds itself at.

Don’t be surprised, though, if the allure of a new stadium and a winning culture provides LouCity the extra push to make more signings of this caliber, setting it as the firm favorite to claim its third star next fall.