LaGrassa, Tribbett, Washington, Winn to remain with club after success with NSC in Championship 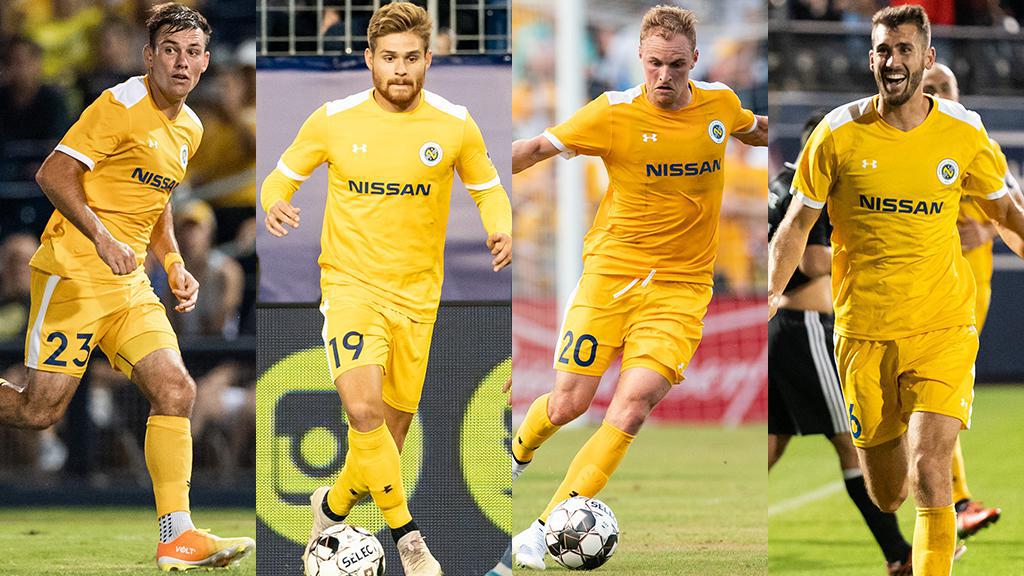 “We are really proud of Matt, Ken, Taylor and Alan for what they’ve been able to provide during the course of these past two USL Championship seasons, and excited for them to continue their development on this journey into Major League Soccer,” said Nashville SC General Manager Mike Jacobs.

LaGrassa, one of Nashville SC’s first USL Championship signings, served an integral part in the club’s game plan, helping Nashville reach the playoffs in back-to-back seasons. A resolute and hard-working central midfielder, who has amassed 65 appearances with the Boys in Gold (57 starts), LaGrassa brings a defensive determination in the middle of the field as well as an ability to recover possession and create attacking chances in transition.

Tribbett was an important part of Nashville SC’s defensive line in 2019. A determined, reliable defender, his versatility allowed him to play as a center back and a defensive midfielder interchangeably. Even from his place on the back line, Tribbett contributed to the offensive agenda, registering four goals and two assists in the course of 25 matches (22 starts) with the club. Coming into MLS, Tribbett spent the 2016 and 2017 seasons with Philadelphia Union, registering 24 matches (20 starts) while helping the Union reach the 2016 playoffs for the first time since 2011.

Washington brings an appreciation and willingness to defend as well as an aggressiveness to join into the attack. A bright left-footed defender, Washington featured regularly with 62 appearances (50 starts) in Nashville’s last two seasons in the league. Prior to his time in the USL Championship, the defender captained D.C. United’s U-23 side before being drafted with the 23rd overall pick by the Philadelphia Union in the 2016 MLS SuperDraft.

A young dynamic attacking player capable of breaking down opponents with his skill and speed on the ball, Winn has proven his worth with 55 appearances (35 starts) during the past two seasons. Quick on offense and able to drop back and play defensively, Winn’s pace and ability to read the field earned him seven goals and four assists. Prior to joining Nashville SC in Feb. 2018, Winn was drafted by the Colorado Rapids as the 25th overall pick during the 2018 MLS SuperDraft.