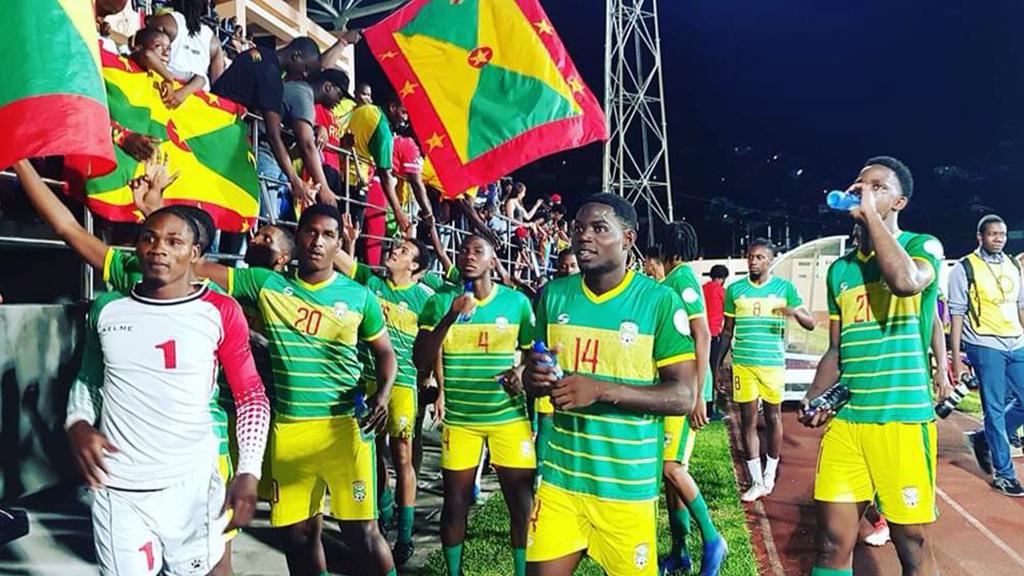 The Charleston Battery's AJ Paterson helped Grenada qualify for the 2021 Concacaf Gold Cup and earn promotion to League A in the next edition of the Concacaf Nations League over the past week of international action. | Photo courtesy Grenada Football Asso

The Charleston Battery’s A.J. Paterson and the Grenada Men’s National Team earned their first trip to the Concacaf Gold Cup in a decade over the past week as the group stage of the 2019-20 Concacaf Nations League concluded with numerous players from the USL Championship and League One in action.

The 23-year-old Battery midfielder went the full 90 minutes in both of his country’s contests that sealed top spot in Group A of League B, including serving as captain on Monday night as the side took a 3-2 victory against Belize on a hat trick by former Real Monarchs SLC forward Jamal Charles. With a 4-0-2 record, Grenada not only advanced to the next edition of the Gold Cup, but also earned promotion to League A for the next edition of the CNL in two years, where it will get the chance to take on the likes of the United States, Mexico and Costa Rica.

"Where we going? GOLD CUP!"

Join The Spice Boys' celebration as they return to @GoldCup for the first time in 10 years #FollowTheDream @GrenadaFootball pic.twitter.com/zKiipONaX2

In all, 27 players that competed in the Championship and League One this season were called into action for their national teams over the past week, including New Mexico United forward Kevaughn Frater, who made his senior international debut for Jamaica during the Reggae Boyz’s 2-0 victory against Antigua & Barbuda last Saturday night that clinched its place in the 2021 Gold Cup and promotion to League A.

Another international debut came for Memphis 901 FC loanee Elliot Collier, who made his first appearance for New Zealand last Thursday in an international exhibition against the Republic of Ireland. Collier then received his first start for the All Whites a few days later as they visited Lithuania to wrap up their year.

Elsewhere in Concacaf Nations League action, the Battery’s Zeiko Lewis and Bermuda almost pulled off the result of the week as they squared off with Mexico in Toluca, only for a goal in second-half stoppage time to earn El Tri a 2-1 victory.

Former Harrisburg City Islanders defender Dante Leverock had put Bermuda ahead in the ninth minute before Mexico responded through Francisco Cordova’s long-range blast to the top-right corner. But then Lewis and his teammates battled to remain on level terms throughout the second half, but moments before the side secured a draw – which would have earned automatic qualification for the 2021 Gold Cup – the LA Galaxy’s Ariel Antuna put home the winner to sink Bermuda’s hopes.