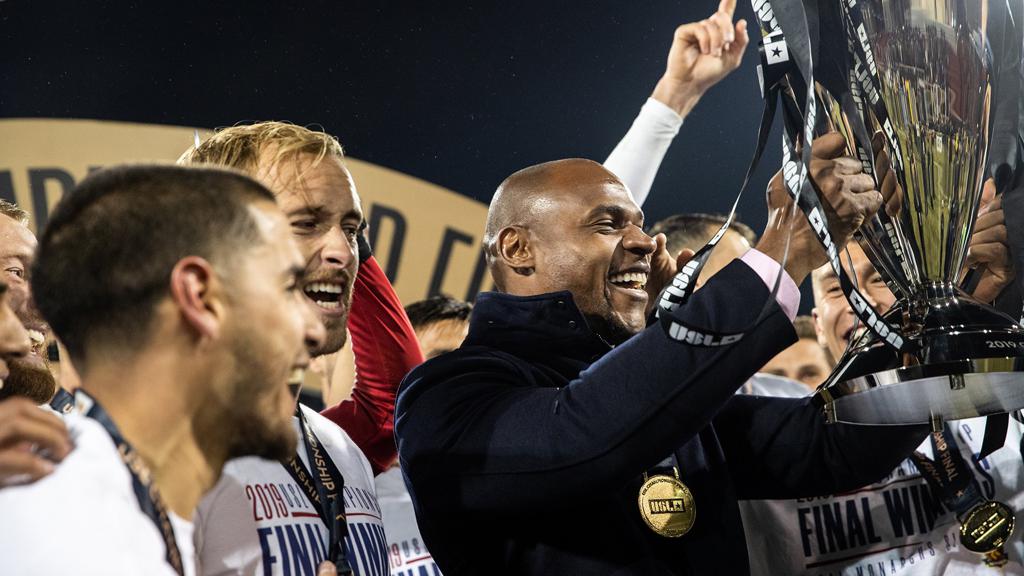 Real Monarchs SLC announced on Wednesday it had appointed Jamison Olave as the fifth Head Coach in club history after leading the team to victory in the 2019 USL Championship Final as Interim Head Coach this past Sunday. | Photo courtesy Real Monarchs SLC

HERRIMAN, Utah – Real Monarchs SLC announced on Wednesday it had appointed Jamison Olave as the club’s Head Coach after leading the team to its first USL Championship Title last Sunday. Olave becomes the fifth head coach in team history, with the former Real Salt Lake defender having served as Interim Head Coach on two previous occasions in 2018 and 2019.

“We’re ecstatic to now have Jamison on as the official leader of our group,” said RSL Executive Vice President of Soccer Operations Rob Zarkos. “His coaching pedigree and extensive knowledge of the game coupled with his success as a leader during the club’s Championship Title run makes him the right fit for the team and our overall development ladder. All of us in the organization have full faith that Jamison will execute growth initiatives of the club using the integration between Real Salt Lake and the RSL Academy while continuing the on-field success within the USL Championship.”

This season, Olave took the reins of the Monarchs as Interim Head Coach on July 1 and led the team to a 10-4-5 (35 points) record over the remainder of the 2019 regular season – including a 3-0-1 finish that earned him the Championship’s Coach of the Month award for October – as the Monarchs entered the playoffs as the No. 4 seed in the Western Conference.

The Colombian then led the Monarchs through an immaculate playoff run which culminated with a 3-1 victory in the 2019 USL Championship Final where it topped reigning back-to-back champion Louisville City FC. Prior to the Championship Final, the Monarchs defeated Orange County SC before knocking off top-seeded Phoenix Rising FC ahead of claiming the Western Conference crown over El Paso Locomotive FC to book its ticket to the Final.

“After two years of being an Assistant Coach and the Interim Head Coach, this feels really good,” Olave said. “Now we just need to keep working hard. We are going to continue to develop players within the Real Salt Lake organization from the RSL Academy all the way to RSL. We’re going to keep working like we did this year and put the team before everything.”

The club also announced it had retained Assistant Coach Matt Glaeser and signed Mirza Harambasic as the Monarchs Goalkeeper Coach for the 2020 season.

Glaeser joined the club in early 2017 as an assistant and goalkeeper coach and played an instrumental role in the team’s Championship Regular Season Title triumph that season and the club’s 2019 USL Championship Title-winning season. A goalkeeper for former Championship side Wilmington Hammerheads FC, Glaeser competed in both the United States and Europe professionally before entering the coaching ranks.

Harambasic, meanwhile, spent the previous season as the goalkeeping coach with the RSL Academy. Prior to his role with the RSL Academy he was the Head Coach and Goalkeeper Coach of Oakwood Soccer Club in Connecticut from 2016 to 2018 and the Assistant Coach at the University of Hartford from 2015 to 2018. A Bosnian native, Harambasic played college soccer in Grand Rapids, Michigan where he won All-Region as a goalkeeper at Davenport University.