Monarchs weather early storm, get contributions from back line again to knock off LouCity 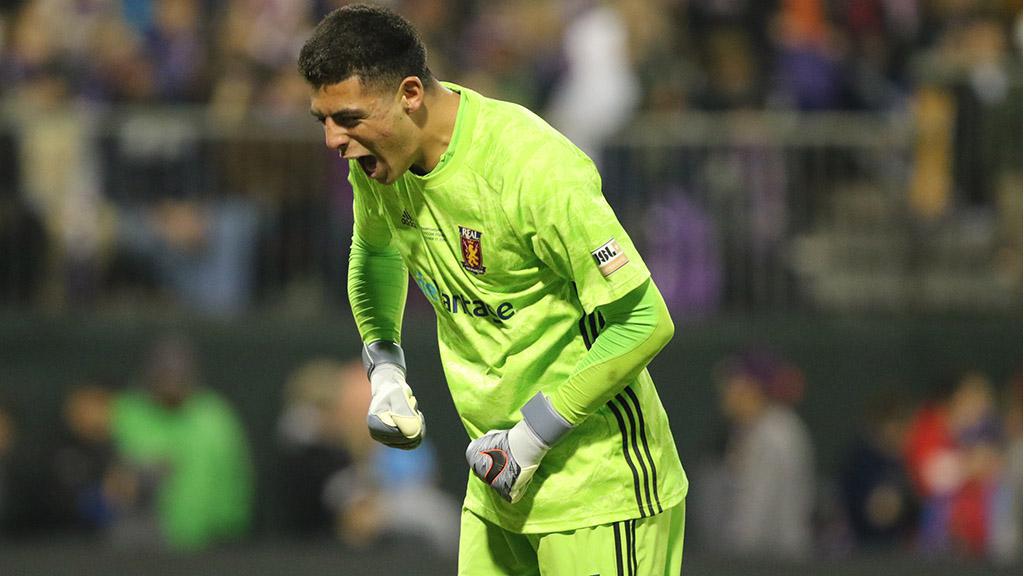 Real Monarchs SLC goalkeeper David Ochoa celebrates his side's 3-1 victory over Louisville City FC in the 2019 USL Championship Final, having played a key role in keeping his side in the contest early in the first half.

LOUISVILLE, Ky. – Real Monarchs SLC earned its first league title in club history on Sunday night, battling back from an early deficit to defeat Louisville City FC 3-1 before a sellout crowd of 7,025 fans at Lynn Stadium in the 2019 USL Championship Final on ESPN2. Here are three takeaways from the match.

WEATHERING THE STORM: Louisville City FC took control of the game from the opening kickoff and made its early pressure count as Antoine Hoppenot helped Niall McCabe’s low cross from the left onto Magnus Rasmussen, who arrived at the top of the six-yard box to sweep home a left-footed shot past Monarchs goalkeeper David Ochoa to give his side the lead with the fastest goal in USL Championship Final history, five minutes and change into the contest. The hosts looked likely to add to that advantage in the opening 20 minutes as Hoppenot went close with an acrobatic flicked effort three minutes later and Ochoa just got a palm to parry Brian Ownby’s left-footed shot from the left side of the box wide of the post before the end of the opening quarter-hour. After a very nervy start, the visitors were able to get back on terms through Erik Holt as the defender picked out the bottom-left corner with a side-footed effort after LouCity had failed to clear its lines from a corner kick, which not only levelled the score but allowed the Monarchs to settle into the contest and gain some much-needed confidence.

DEFENSE IS THE BEST ATTACK: Yes, the cliché is normally the other way around, but the Monarchs have taken this backwards motto literally over the past two weekends. Last Saturday in their 2-1 Western Conference Final victory over El Paso Locomotive FC, Real got both of its goals from its center backs as Kalen Ryden finished from close range early in the second half and Holt dramatically headed the side into the Championship Final in the final minute of extra time. Once again, the Monarchs’ back line proved to be deadly from set pieces as Holt levelled the contest with a forward’s finish from 20 yards out and Konrad Plewa – now a two-time Championship Final winner – gave his side the lead just before halftime as the visitors again maintained possession after a corner kick and the center back rose up in the middle of the penalty area to flick Luke Mulholland’s left-wing cross past Chris Hubbard. The LouCity goalkeeper did well to deny left wingback Tate Schmitt on a breakaway in the 65th minute, but it was right wingback Noah Powder that gave the visitors a two-goal advantage moments later as he cut into the area and curled a left-footed shot beyond Hubbard into the bottom-left corner, giving the hosts a big hill to climb.

OUT OF MAGIC: Louisville City FC’s run to the USL Championship Final had predominantly been founded on its ability to never say die. The two-time defending champion overcame one-goal deficits in the Eastern Conference Semifinals against top-seeded Pittsburgh Riverhounds SC and did so again in Eastern Conference Final against Indy Eleven, tying the game in the fourth minute of stoppage time before scoring twice in extra time. In addition to that, Louisville had led the USL Championship in points gained from a losing position during the regular season, with 23 of its 60 points coming via the comeback trail. That resilience that saw the club climb back to its third straight Championship Final was put to the test again by the Monarchs, who held their nerve defensively over the final 25 minutes after taking a two-goal lead as Ochoa made one strong punch to deny Abdou Thiam on the doorstep, but generally had little to do as the guys in front of him stifled LouCity with their shape and effort, denying the hosts a third straight title.