LouCity’s Resilience a Contrast to Prior Title Runs

Rallies against Hounds, Eleven continued remarkable year of comebacks for Hackworth’s side 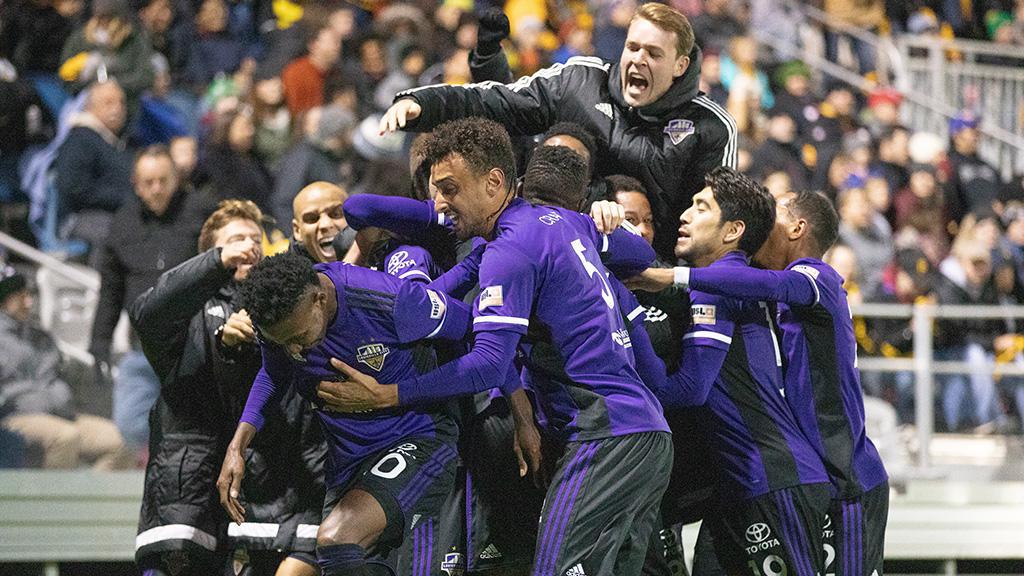 Louisville City FC's win versus Pittsburgh Riverhounds SC in the Eastern Conference Semifinals was one of eight comeback victories the side has notched in the regular season and postseason in 2019. | Photo courtesy Em-Dash Photography / Louisville City FC

LOUISVILLE, Ky. – You’d be hard-pressed to find a more resilient side than Louisville City FC this season in the USL Championship.

Going simply by the numbers, LouCity recorded more points than any other side from a losing position in the regular season, with 23 of the club’s 60 points coming from contests in which they trailed, one more than the New York Red Bulls II and eight more than their opponent in Sunday’s 2019 USL Championship Final, Real Monarchs SLC.

Add in the comeback victories on the road Head Coach John Hackworth’s side has pulled off already this postseason against Eastern Conference top-seed Pittsburgh Riverhounds SC and No. 3 seed Indy Eleven over the past two weekends and the club’s never-say-die spirit has been on full display.

“It just takes belief, and nothing says it more than what we did on Saturday, but we’ve been doing that all year,” said Hackworth earlier this week. “We’ve gone down a goal in so many games, and that’s not a good thing, but the great thing statistically is that it’s improbable what we’ve been doing to come back and get victories when we’ve been down like that.”

It’s a far cry from Louisville’s prior runs to league titles in the past two seasons. In both 2017 and 2018, LouCity didn’t trail for a minute on the way to claiming the title, with the prospect of elimination only arriving in the 2017 Eastern Conference Final when a missed penalty by Paolo DelPiccolo in the second round of a shootout against the New York Red Bulls II gave the visitors an early edge from the spot.

Last year, meanwhile, Louisville rolled to its second title, holding the lead over its four opponents on the way to raising the trophy for 212 of a possible 360 minutes, or 58.9 percent of the action.

But with a clear rise in the level of competition in the Eastern Conference – say nothing of the target on the team as the two-time defending champion – it’s no surprise that Louisville has had to fight far harder to return to this point.

With eight players that competed in the 2017 Championship Final in the squad, and 11 players that featured in the victory against Phoenix Rising FC a year ago, the continuity the side possesses and the identity it brings has helped move LouCity to the verge of becoming the first three-time title-winner in the Championship’s history.

“That’s the biggest message within the group, follow the process,” said Oscar Jimenez. “This is what the process is, this is the requirements in training, what we do, what we’re about and you can see how cohesive and united our group is right now, and I think that’s the biggest thing in terms of getting to this point of the year, every single year.”

The Monarchs have shown resilience of their own, of course, coming back from conceding the opening goal against both Phoenix Rising FC and El Paso Locomotive FC over the past two weeks. Add in a solid ability to rally as indicated by the previously mentioned 15 points gained from losing position, this might be one game that will not be decided by the opening goal.

But given the history of the Championship Final – where in the previous eight contests a side has only rallied twice to claim victory after conceding first – and Louisville’s relative strength in holding a lead this season – LouCity only dropped seven points from a winning position, compared to 18 dropped points for the Monarchs during the regular season – should Louisville hit the front on Sunday night it could be a very long way back for Real.