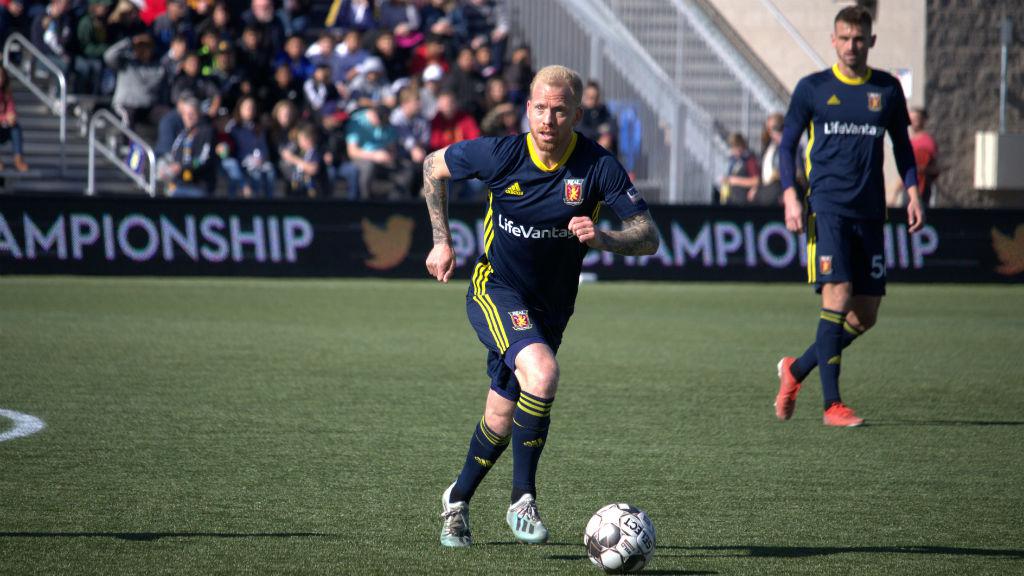 Now 31 years old, Luke Mulholland pushed to play for Real Monarchs SLC this season after earning limited action in MLS, and has served as a veteran voice on the field in leading the club to the 2019 USL Championhip Final. Photo courtesy McKenzie Burkart /

At the start of the season, it’s safe to say that Luke Mulholland wouldn’t have seen his 2019 campaign culminating in a trip to Louisville for Sunday’s USL Championship Final.

After all, the 31-year-old Englishman had been a fixture in Major League Soccer over the past few years, making more than 100 regular-season appearances for Real Salt Lake since joining the club in 2014 and featuring prominently in the team’s 2018 Audi MLS Cup Playoffs run after an injury-hit campaign.

However, things changed in 2019 as Mulholland dropped down the pecking order for then-Head Coach Mike Petke, who was relieved of his duties by RSL in August, and the veteran defensive midfielder had to look elsewhere for opportunities to stay sharp.

Naturally, Mulholland’s individual goal was to prove to the RSL organization that even after the injury he’s still the same guy that played such an integral part in the center of the team’s midfield for most of the last half-decade. However, a loan stint in the Championship has also brought him back to a familiar situation, one where he fights to earn the right to play at the highest levels.

It’s a challenge that Mulholland overcame before, having played Division II soccer at Wingate University and for USL League Two’s Reading United AC – where he competed alongside fellow future pros Matt Hedges, C.J. Sapong, Ray Gaddis and Corey Hertzog – before joining the professional ranks in the Championship with the Wilmington Hammerheads in 2011. There, he won the USL’s Rookie of the Year award before joining Minnesota United FC in a late-season switch that proved prosperous as he went on to win the NASL Championship, scoring in the first leg of the final on his way to earning MVP honors.

Mulholland won another title the following year with the Tampa Bay Rowdies and spent just one more season with the current Championship club before making the leap to MLS. Now, after working his way back from injury and getting into a groove with the Monarchs, a chance at another trophy has presented itself. 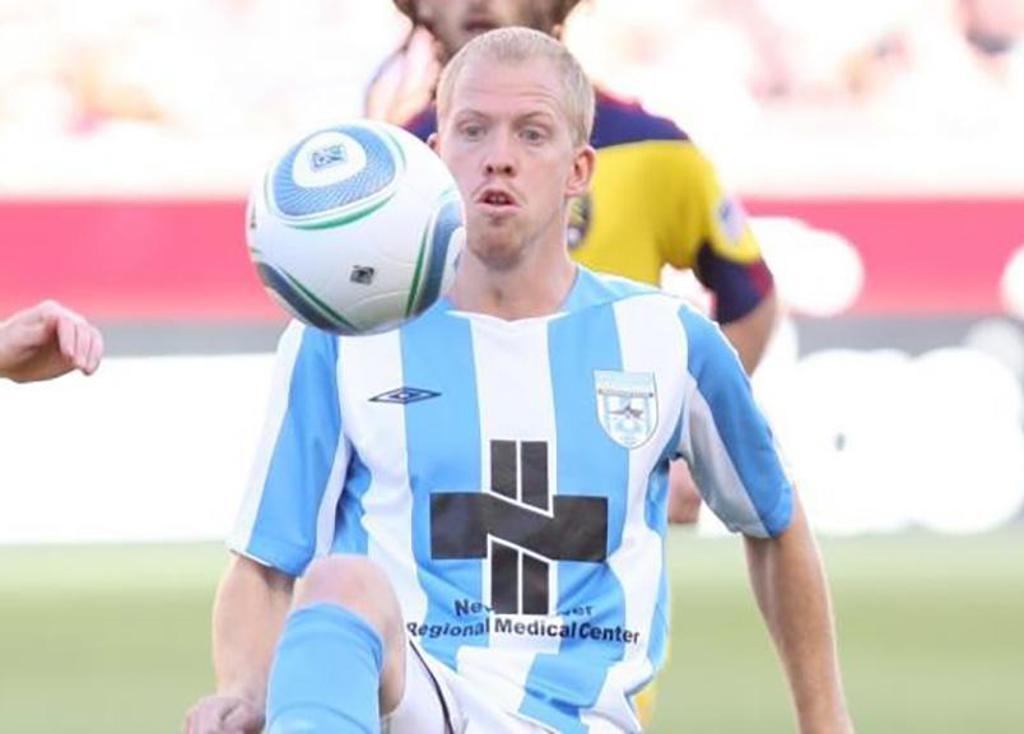 In his first professional season with the Wilmington Hammerheads, where he earned the Championship's Rookie of the Year award, Luke Mulholland got to face future club Real Salt Lake in the Lamar Hunt U.S. Open Cup.

Mulholland has been a staple for Real in the USL Championship Playoffs, playing all but 15 minutes as the side navigated its way past Orange County SC, Regular Season Title-Winner Phoenix Rising FC and El Paso Locomotive FC to earn a chance to dethrone two-time defending champion Louisville City FC on Sunday.

“We’re confident. If we weren’t, we wouldn’t bother sending our team all the way to Louisville,” said Mulholland. “We were able to get hot at the right time and we were getting some good performances and good results along that last stretch, so right now we’re confident as a team.”

The Englishman has certainly played his part in helping the Monarchs, who won the 2017 Regular Season Title but failed to get out of the Western Conference Quarterfinals each of the past two seasons, finally get over the hump this time around. And it’s not just in games where his impact is most felt.

As the oldest outfield player on a relatively young team, Mulholland has brought a veteran leadership presence to training every day as well.

“I’m definitely harsh on those guys,” said Mulholland. “Always trying to tell them that they’ve just got to work their tail off every session and what not because they’re quality players for their age group. But when you step on the field at the professional level, it doesn’t matter if you’re 18 or in your mid-30s, it’s a man’s sport.

“So, I think that’s the biggest point I try to get across to young guys is you’ve got to be physical and don’t be afraid to talk back to myself or other players, it’s the only way you can learn. Accept the constructive criticism, don’t just let it go in one ear and out the other, try and digest as much as you can. That’s the only way these young guys are going to learn and progress.” 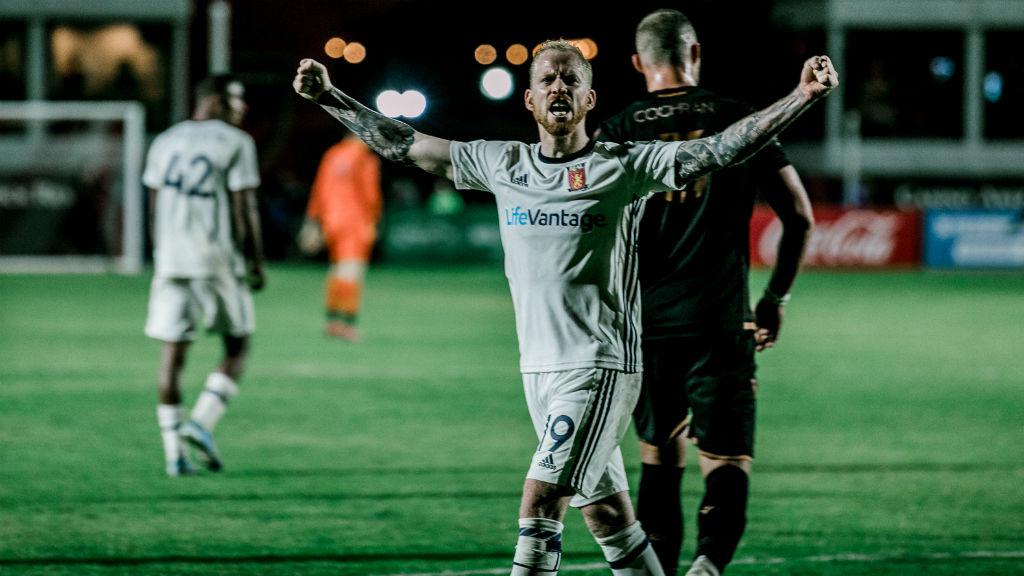 The progress is certainly showing heading into Louisville this weekend, which will host the Championship Final for the third straight season and welcome a sellout crowd of more than 7,000 fans, most of which will be clad in Purple. Mulholland said the team respects what LouCity has accomplished the past few years but won’t have any fear heading into Lynn Stadium on Sunday.

And if he’s learned anything from his past experiences in finals, it’s that anything can happen.

“You don’t necessarily play your best football always,” said Mulholland. “In playoff runs and in finals, a lot of times what it comes down to is just hard work, sometimes it’s individual quality, sometimes it’s a lot of luck. So I think that what I’ve learned is just we’ve done well to get ourselves invited to the big dance and now we can just go and leave everything out there and just give it our all.

“I’m sure with the quality that we have available within our team we should be able to get the job done.”

No matter the result when the final whistle blows, Mulholland will be proud of the work he and the Monarchs have put in over the final third of the season, but there’s no doubt that a title would be a sweet end to what has been a difficult two-year stretch for the Englishman.

“I feel I’ve done with it the best I could and right now I’ve got an opportunity to become a USL champion with the Monarchs, so I’m going to do everything in my power to make that happen. To turn around a quiet season in the first team for me into a good season with the Monarchs.”