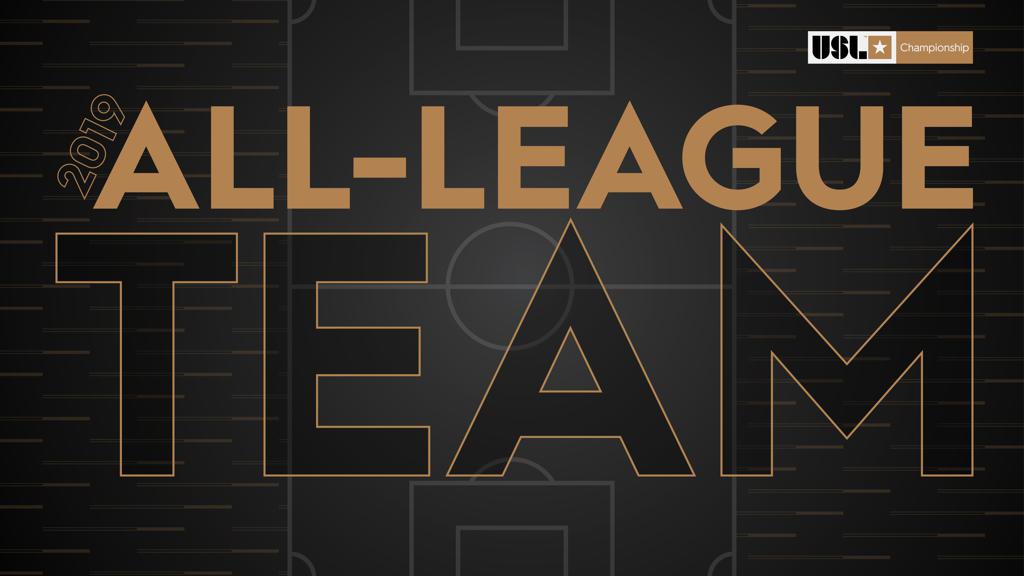 Asante and Greenspan were among four players to be named in the All-League First Team for a second consecutive season. They were joined by Nashville SC forward Daniel Rios – who became the first player in Championship history to record 20 goals in a regular season in back-to-back campaigns – and defender Forrest Lasso.

The 2019 USL Championship All-League Team was voted on by club management and a league-wide media panel that included representation from every USL market.

The finalists for the 2019 Championship Awards will be announced on Wednesday, preceding the 2019 USL Championship Final, which will air live on ESPN2 and ESPN Deportes in the United States on Sunday, November 17 at 7:30 p.m. ET as Louisville City FC of the Eastern Conference and Real Monarchs SLC of the Western Conference meet at Lynn Stadium in Louisville, Kentucky. 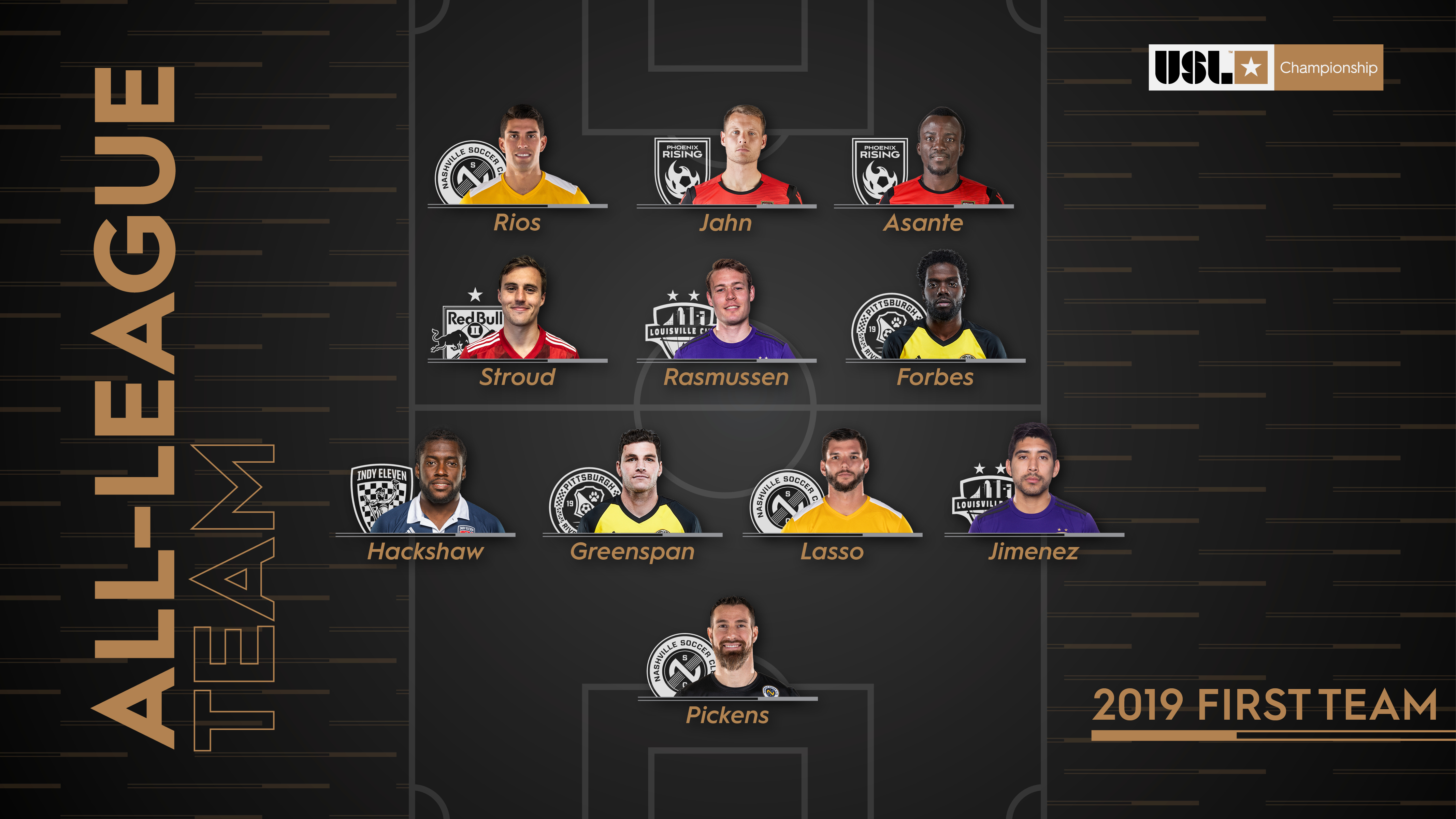 GK – Matt Pickens, Nashville SC: Pickens claimed the Championship’s Golden Glove with a 0.64 goals-against average and posted a league-high 14 shutouts during the regular season on a 79.8 save percentage.

D – Neveal Hackshaw, Indy Eleven: Hackshaw ranked in the top 10 among outfield players with 231 recoveries, won 65.8 of duels – 10th in the league among players to win at least 175 duels in the regular season – and won 29 of 39 tackles.

D – Joe Greenspan, Pittsburgh Riverhounds SC: Greenspan led a defensive line that recorded a league-best 17 shutouts as he finished fourth in the league in clearances with 151, made 44 interceptions, won 69.4 percent of duels and 75 percent of aerials while also chipping in four goals and two assists.

D – Forrest Lasso, Nashville SC: Lasso provided a major boost to Nashville’s defense after his midseason arrival as he recorded 60 clearances and 61 recoveries while NSC posted a 0.43 goals-against average with him on the field over the second half of the season.

D – Oscar Jimenez, Louisville City FC: Jimenez finished tied for second in the league with 90 chances created, posted seven assists and made 191 recoveries while completing 1,498 passes at an accuracy rate of 81.6 percent.

M – Jared Stroud, New York Red Bulls II: Stroud recorded 15 goals and nine assists to lead the Red Bulls II back to the postseason for a fifth consecutive year, and finished tied for second in the league with 90 chances created and tied for third with 18 Big Chances Created.

M – Magnus Rasmussen, Louisville City FC: Rasmussen led Louisville with 13 goals, including three tallies from outside the penalty area, while also completing 1,003 passes at an accuracy rate of 80 percent and recording three assists and 33 chances created. 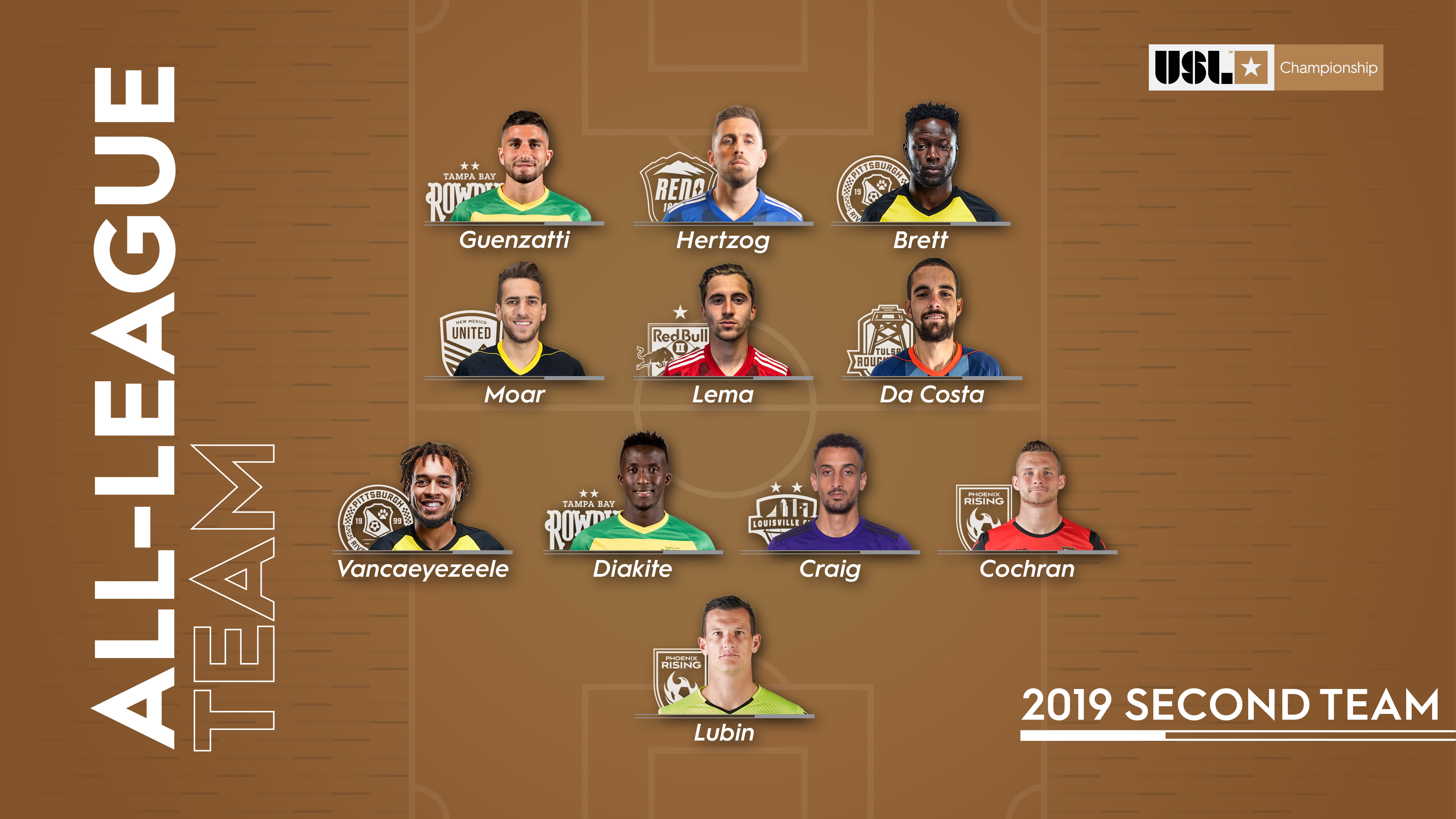 GK – Zac Lubin, Phoenix Rising FC: Lubin recorded 79 saves and a save percentage of 75.7 on the way to posting 13 shutouts and a goals-against average of 0.86 during Rising FC’s run to the regular season title.

D – Thomas Vancaeyezeele, Pittsburgh Riverhounds SC: Vancaeyezeele ranked seventh in the Championship with 62 interceptions, made 160 recoveries and won 52 tackles at a success rate of 71.2 percent in a stout Hounds defense.

D – Pape Diakite, Tampa Bay Rowdies: Diakite ranked fifth in the league with 149 clearances, won 65.5 percent of duels and made 162 recoveries as he helped the Rowdies record 11 shutouts to earn a return to the USL Championship Playoffs.

D – Paco Craig, Louisville City FC: Craig recorded 108 clearances, 192 recoveries and 47 interceptions, had a tackle success rate of 80.7 percent and a passing accuracy rate of 81.7 on 1,267 completed passes, and notched a pair of goals.

M – Santi Moar, New Mexico United: Moar recorded 11 goals and five assists for the first-year club, tied for third in the league with 93 completed dribbles at a success rate of 60.4 percent and recorded 51 chances created, 45 shots on goal and 14 Big Chances Created.

F – Sebastian Guenzatti, Tampa Bay Rowdies: Guenzatti set a modern-era Rowdies record with 18 goals to finish tied for third in the league and notched six assists on 31 chances created while captaining the side to a return to the postseason.