INDIANAPOLIS – Make it 11 postseason victories in a row for the defending title holders.

And make this one of the closest calls it has had in that span.

Louisville City FC advanced to the USL Championship Final for a third consecutive season as a goal deep in second-half stoppage time by Antoine Hoppenot kept the two-time defending champions alive before Magnus Rasmussen and Luke Spencer struck in extra time for a 3-1 victory against Indy Eleven in the Eastern Conference Final of the 2019 USL Championship Playoffs before a crowd ot 7,171 fans at Mike A. Carroll Stadium on Saturday evening.

Trailing to Tyler Pasher’s strike for Indy midway through the second half, Louisville appeared down to its final chance when it won a corner kick on the left in the fourth minute of stoppage time.

And then, another moment of postseason magic arrived.

Oscar Jimenez’s delivery skimmed over a cluster of competing heads at the near post and fell to Hoppenot in space at the back of the penalty area. The LouCity man hit a low, first-time shot that found its way through the players before him and into the back of the net, sending the large Louisville travelling contingent into massive celebration.

Four minutes into extra time, it got even better for the visitors.

After Brian Ownby fought off a defender down the left, he created space for a low cross to the near post that was deftly flicked on by Abdou Thiam to a free Rasmussen, who had time to pick his spot in the bottom-right corner for his 16th goal of the season.

Indy had a chance to level in the first period of extra time as a flighted cross from the right by Pasher picked out Ilija Ilic at the far post, but George Davis IV and Niall McCabe hustled in front of their former teammate's shot to deflect it over the crossbar.

Louisville, however, wouldn’t be denied its third consecutive trip to the USL Championship Final, and in the 113th minute put the game away for good. After Ownby broke in behind the defense and was brought down in a collision with Indy goalkeeper Jordan Farr, Spencer converted from the penalty spot to the left corner to make it a two-goal lead.

Indy tried to hit back immediately to cut into LouCity’s advantage, and Ayoze fired a beautiful half-volley from the top-left corner of the penalty area that zipped just over the crossbar a minute after Spencer’s penalty kick, but from there Louisville saw out the game to earn its third consecutive Eastern Conference championship. 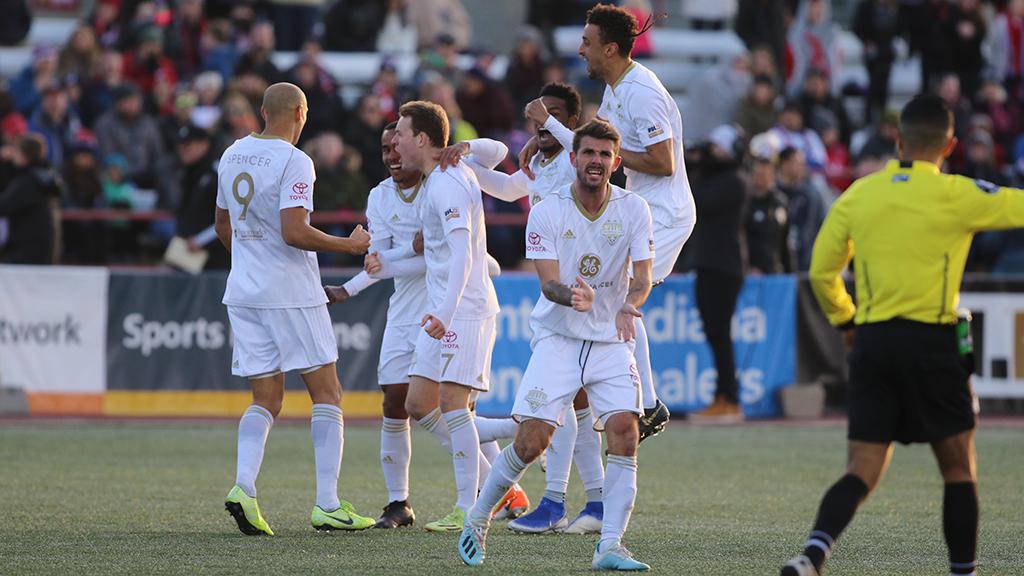 The Eleven had opened the game with its first real chance as a long ball over the top released Dane Kelly, but the Jamaican forward took one touch too many as he broke into the penalty area which allowed Louisville defender Sean Totsch to make a clearing challenge before Kelly could test LouCity goalkeeper Chris Hubbard.

Louisville controlled the majority of possession from thereon in both halves, but Indy’s defense gave the visitors little opportunity to find openings in the final third. Instead it was Indy that had the best chance before the halftime break when a looping cross from the right by Macauley King saw Kelly rise to put a powerful header on target from 12 yards that Hubbard was equal to, turning the effort away for a corner.

Indy’s Paddy Barrett then almost caught lightning in a bottle inside the opening minute of the second half as he shot from just inside his own half trying to catch Hubbard off his line as the sun began to lower in the LouCity goalkeeper’s eyeline. Hubbard did just enough to turn the effort wide of the left post.

But then, in the 67th minute, Indy’s man of the moment arrived again. Springing forward on a flick by Kelly, Pasher drove in on goal and fired a low shot to the left corner that put the hosts ahead on his 13th league goal of the season.

Louisville quickly got back on the front foot as the introduction of Thiam proved an important addition. His first action after coming on was to rattle a low cross through the six-yard area that didn’t get a finishing touch before rolling out of play. The Senegalese forward then almost leveled for LouCity with eight minutes to go as he outfoxed Indy’s Neveal Hackshaw when the ball bounced between the hesitating defender and his goalkeeper. Thiam stretched around Hackshaw and lifted his finish over a stranded Farr, but saw his effort rebound off the face of the crossbar and be cleared away to safety.

Indy had two chances in the final minutes to put the game away for good, the first falling to Pasher as he worked a beautiful counterattack with Ayoze that played him into space on the left, but his shot was high and wide of the near post. Matt Watson then broke on a counter down the left side but curled his shot just over the top-right corner of the net.

It appeared those late misses wouldn’t come back to haunt the hosts as they held grimly to their lead. But, given one final chance, Hoppenot’s finish arrived to send the game to extra time, and LouCity onto another historic victory.