HERRIMAN, Utah – Erik Holt’s header in the 120th minute sent Real Monarchs SLC to the USL Championship Final for the first time as the No. 4 seed rallied from a first-half deficit to claim the Western Conference crown with a 2-1 victory in extra time over No. 6 seed El Paso Locomotive FC on Saturday afternoon at Zions Bank Stadium.

After a conservative start from both sides, it was the hosts that fired the first warning shot as Luke Mulholland played a give-and-go with Jack Blake near the edge of the area before curling a left-footed shot over the crossbar in the 25th minute.

Locomotive FC responded with its first shot on target four minutes later when James Kiffe played a long ball over the top to Omar Salgado, who did well to get some power behind a left-footed volley from the corner of the box but Monarchs goalkeeper David Ochoa was alert to it and able to push the effort over the crossbar.

It looked as though the two sides were going to head into halftime scoreless, but the visitors edged in front from a free kick in the only minute of first-half stoppage time when Jerome Kiesewetter won the initial header from Callum Ross’ right-wing delivery and Omar Salgado eventually brought it down for center back Andrew Fox to power home from close range.

The Monarchs needed just three minutes of the second half to equalize from a free kick of their own as Konrad Plewa rose highest to win Justin Portillo’s driven delivery at the back post and Locomotive FC center back Chiro N’Toko’s attempted clearance fell right at the feet of Kalen Ryden for the defender to sweep his finish past a helpless Logan Ketterer from eight yards out.

N’Toko made a strong sliding block to deny Monarchs leading scorer Douglas Martinez two minutes later as the home side continued to apply pressure and things got even worse for the visitors in the 51st minute as James Kiffe was shown his second yellow card in a five-minute span after taking down Martinez on the wing. 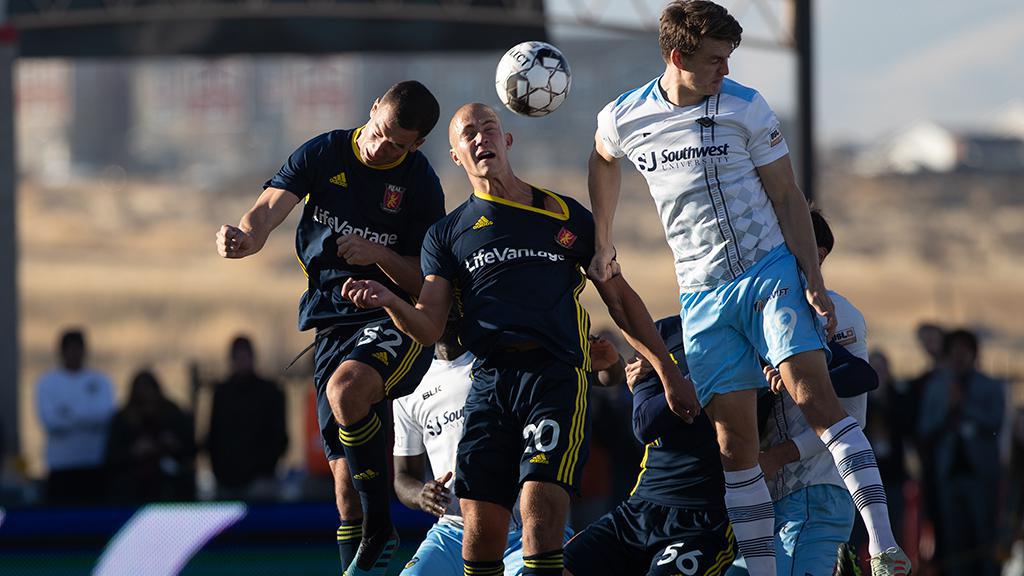 Real Monarchs SLC's Erik Holt wins a late header that resulted in the game-winning goal for his side against El Paso Locomotive FC in the Western Conference Final of the 2019 USL Championship Playoffs. | Photo courtesy McKenzie Burkart / Real Monarchs SLC

The Monarchs nearly made the most of their numerical advantage three minutes later when James Moberg’s long throw-in from the right reached Tate Schmitt at the back post, but the hard-charging midfielder couldn’t direct his header on frame.

Locomotive FC did well to settle things down from there and came close to taking the lead on a swift counterattack in the 81st minute when Josue Aaron Gomez sprung Salgado down the left. The forward tried his luck from a tight angle, but Ochoa stood tall at his near post to parry the shot away.

Ketterer answered his opposite number with a stellar save at the other end five minutes later as Noah Powder slipped Maikel Chang clean through down the right side of the box, but the El Paso goalkeeper got off his line and made himself big to keep the forward’s shot out with his face.

The visitors carved out one final chance to find a winner in regulation as Drew Beckie headed a corner kick down to Aaron Gomez, but he sliced his attempted left-footed volley over the crossbar and the contest headed to extra time.

The Monarchs looked to step back onto the front foot early in the first period of extra time and nearly took an immediate lead as Martinez set up Chang for a curling left-footed strike from the edge of the box. Ketterer showed off his athleticism to leap across his goal and get a palm on the ball to keep it out of the top-left corner.

Both teams looked fatigued throughout the majority of extra time and were unable to create much going forward, but just as the contest looked like it was going to be settled by a dramatic penalty shootout, the Monarchs were able to get in front as Holt rose up in the box to head Noah Powder’s corner kick past Ketterer into the side-netting to send the hosts in the USL Championship Final.

Kalen Ryden, Real Monarchs SLC – Ryden scored the Monarchs’ equalizer early in the second half, completed 88 percent of his passes, won 4 of 6 duels and made five recoveries to help Real advance to its first USL Championship Final.