Pasher Proving Man of the Moment for Indy Eleven 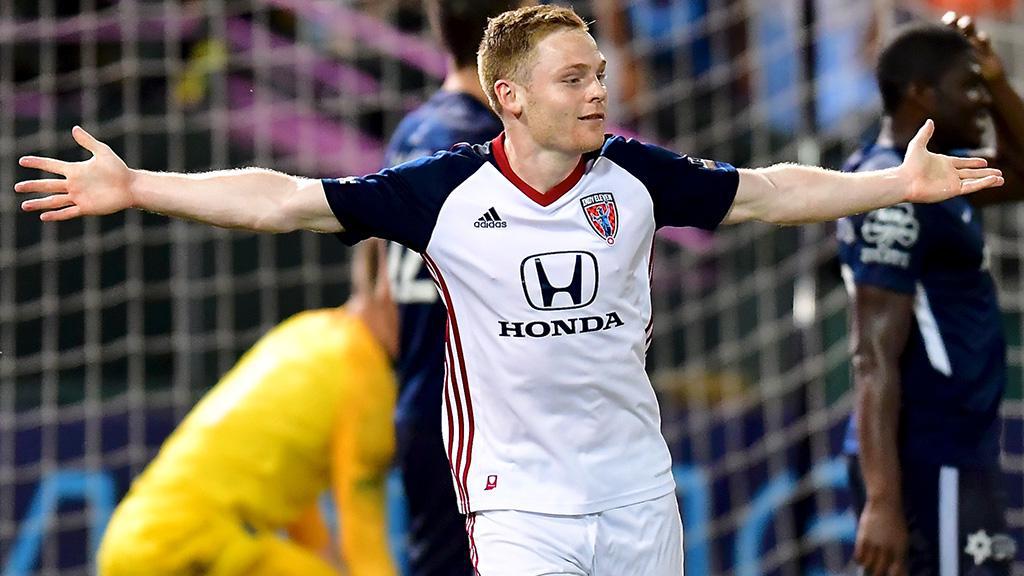 With 12 goals this season, Indy Eleven's Tyler Pasher has more than doubled his goal total in his Championship career this season while leading the Eleven to the Eastern Conference Final of the 2019 USL Championship Playoffs. | Photo courtesy Eric Glemser

INDIANAPOLIS – Indy Eleven began experimenting with a three-center back lineup at the end of the 2018 USL Championship season, and with the arrival of players like Trinidad & Tobago international Neveal Hackshaw and veteran Paddy Barrett this offseason, the plan moving forward was clear for Head Coach Martin Rennie’s side.

With All-League selection Ayoze set to take on the left wingback role in the 3-5-2 formation, though, it left a question as to where Tyler Pasher fit into the new set-up.

The Canadian – who was coming off an injury-hit 2018 that saw him make only 10 appearances – had played a similar role on the left previously for the Swope Park Rangers, recording 29 key passes and three assists in the 2017 season.

But as it turns out, Pasher has proven a perfect fit as the side’s No. 10, going from chance creator to leading goalscorer for the Eastern Conference Finalist ahead of its clash with Louisville City FC this Saturday at Mike A. Carroll Stadium (3 p.m. ET | Preview).

“I have to be honest it was a pretty easy transition,” Pasher said this week. “It’s a role where I can express my abilities which have been hidden at positions I’ve played mostly throughout my career. I’m grateful that I got the opportunity to go in there and show what I can do.”

Pasher’s 12 goals have more than doubled his career total in the Championship, but arguably the most important thing about his finishing has been the timeliness of those goals. His goal against Nashville SC this past Saturday was Pasher’s fifth game-winning goal of the season for the Eleven, a number that emphasizes his value for a side that sat in the middle of the pack offensively this season.

That comes in part from Pasher’s mentality when he steps out onto the field, and the cognizance of how important maximizing the chances that come his way are going to be for his side.

Pasher’s goal against Nashville was in a way an encapsulation of his ability to execute when the moment arrives. From a stinging shot on target from distance late in the first half to another effort that forced a save from Nashville goalkeeper Matt Pickens shortly after the break, the intuition between Pasher and midfielder Tyler Gibson opened up NSC’s defense for a perfectly created moment.

“I made a little movement which you can’t really see on the camera and I looked at him, and as soon as he saw that, he knows what that means and he just did exactly what he had to do and I was luckily able to finish it off,” said Pasher. “To be honest, I don’t really remember it happening. It was just one of those where it was all in the moment and the ball came and I just half-volleyed it into the corner and I saw it go in and I was just celebrating with the guys.”

Having the freedom to express himself in the attacking third has been a blessing for Pasher, and it’s one that’s reflected within Indy’s lineup. While there is a rigid defensive structure that Rennie has applied to the side – which has worked to particularly devastating effect on the Eleven’s home turf, where it is 14-0-4 this season and has conceded just six goals – there is also a fluidity to the side in possession that has also made it an entertaining team to watch.

“Yeah, we get freedom to play, and that’s exactly what we did against Nashville,” said Pasher. “Every guy wanted to win, and you saw our real true talent come out. It’s one of those games where we haven’t done that this year, where we’ve totally dominated a game. A lot of it is the group of guys he was able to build and bring together.”

Indy’s fans will be hoping there’s another moment like Pasher’s goal against Nashville awaiting them as they try to end Louisville’s bid for a third consecutive trip to the USL Championship Final. Pasher scored in each of the prior meetings between the clubs to give Indy the lead, but LouCity fought back to earn a point on both occasions.

Having been on the losing side in the USL Championship Final in 2016 for Swope Park, and then missing out on the 2017 Final through injury, getting the chance to return for a chance at a title on home turf would be a fine end to an outstanding campaign.

“It would feel great,” said Pasher. “It would be exciting to be part of, as it always is in a final.”