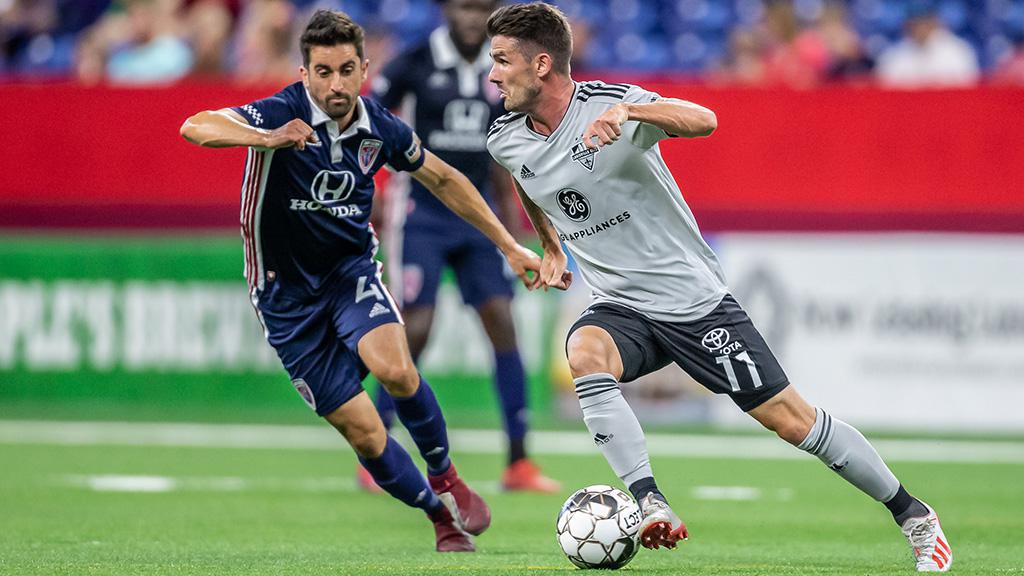 Indy Eleven and Louisville City FC will meet for a place in the 2019 USL Championship Final on Saturday afternoon at Mike A. Carroll Stadium. | Photo courtesy Trevor Ruszkowski / Indy Eleven

INDIANAPOLIS – After each claiming victories on the road last weekend, No. 3 seed Indy Eleven and No. 4 seed Louisville City FC will square off for a place in the 2019 Championship Final on Saturday afternoon as they meet in the Eastern Conference Final at Mike A. Carroll Stadium. Kickoff is scheduled for 3 p.m. ET.

@IndyEleven makes its debut in the Eastern Conference Final after claiming just its seventh road win of the season – and first since August 3 – in a 1-0 victory against No. 2 seed Nashville SC last Saturday night. The win, combined with that by Louisville, returned the Eleven to its home turf for this weekend’s battle between the clubs, where Head Coach Martin Rennie’s side has gone undefeated so far this season. Indy went 13-0-4 at Lucas Oil Stadium during the regular season and then took a 1-0 victory at “The Mike” against the New York Red Bulls II in the Conference Quarterfinals two weeks ago and will be hoping that home form can carry it into its first USL Championship Final.

If there’s a side that knows about ending home undefeated streaks, though, it’s @LouCityFC, which brought No. 1 seed Pittsburgh Riverhounds SC’s undefeated streak at Highmark Stadium to an end this past Saturday with a 2-1 victory after extra time as Paolo DelPiccolo’s second goal of the season in the 118th minute proved the difference. Looking to claim its third consecutive USL Championship crown, LouCity is now on a 10-game postseason winning streak and would earn the right to host the USL Championship Final for a third consecutive year should it take a second consecutive road victory.

5 – Tyler Pasher’s goal against Nashville SC was his fifth game-winning goal this season out of 12 tallies overall in the Championship during the 2019 season.

10.4 – Louisville recorded an average of 10.4 chances created per game on the road this season, the second-highest total in the Eastern Conference.