DATA DRIVEN: Who Were the Statistical Standouts in 2019?

Using Opta data, here’s an alternative Team of the Year for the league’s regular season 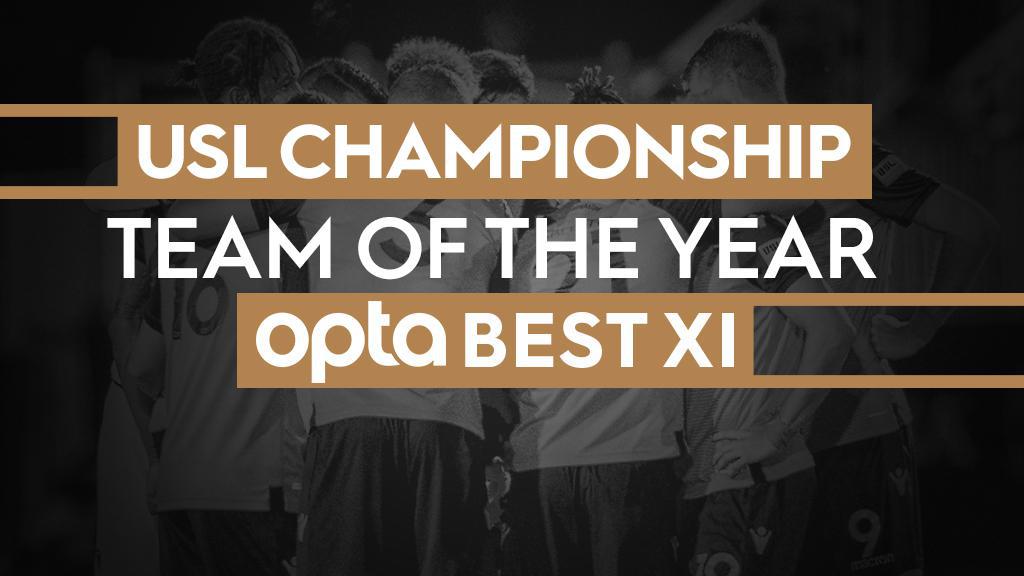 Last week, voting concluded for the 2019 USL Championship Awards as members of club staff and media members from around the country cast their ballots to determine which players will be honored for their performances this season.

But while those are the official awards, we thought it would be interesting to see what Opta’s data said about the way players had performed this season and create an alternative First and Second Team. In each game this season, players were rated on a 10-point scale independent of the game’s final result. For example, when Saint Louis FC’s Lewis Hilton posted two goals, five chances created and completed 45 of 54 passes in his side’s 4-3 loss to Loudoun United FC on October 9, he earned a 9.2 rating.

A player’s average rating, therefore, should provide an insight as to who performed at a consistently high level, game-in and game-out.

We’ve used a couple of qualifiers here. First, a player must have played at least 1,530 minutes – 50 percent of the minutes in a 34-game regular season – to give a fair sample of performances. Players like Nashville SC defenders Forrest Lasso and Jimmy Ockford that arrived via a mid-season loan fall short of this mark.

Second, we’ve tried to be objective about whether a player made enough appearances at a position to be considered representative of their year.

Below you can find the players, their average ratings and the potential reasons why they’ve drawn favor from the all-seeing computer. 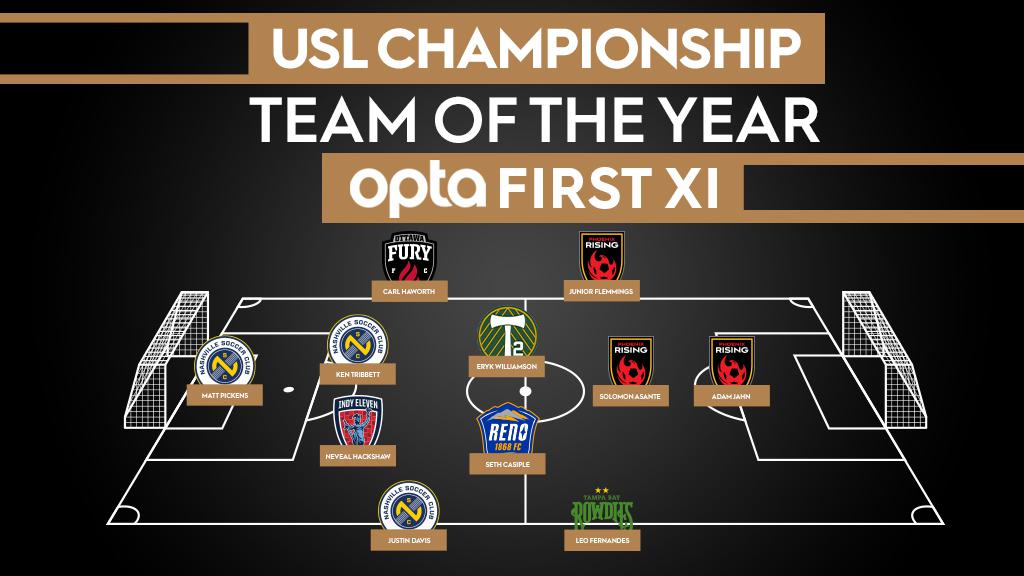 GK – Matt Pickens, Nashville SC (6.87): As the Championship’s Golden Glove award-winner it’s no surprise to see Pickens here, but the veteran put up other stellar numbers as well. Maybe the most notable? His 79.75 save percentage was four percent better than any other goalkeeper that recorded at least 50 saves in the regular season.

FB – Carl Haworth, Ottawa Fury FC (7.47): Haworth posted the second-highest rating of any player in the Championship and gets the nod at full back over his more advanced role late in the season. Haworth’s ability to find the net boosted him in a big way as he more than doubled his closest competition with five free kick goals, but he also failed to record an error that led to a shot throughout the season as well.

CB – Ken Tribbett, Nashville SC (7.21): Nashville’s overall defensive prowess helped Tribbett here – NSC’s goals-against average when Tribbett was on the field was 0.57 – but he also put together solid numbers at both center back and in midfield after coming back from a mid-season injury, winning 69 percent of aerials and 65 percent of duels while averaging 6.7 recoveries per game.

CB – Neveal Hackshaw, Indy Eleven (7.08): Hackshaw put up good defensive numbers on a solid Indy back line, but his high-volume passing stats appear to have helped push him up this list. The Trinidad & Tobago international registered the fourth-most completed passes in the league with 1,556 and tied for eighth among outfield players with 231 recoveries on the season.

FB – Justin Davis, Nashville SC (7.22): You could sum up Davis’ season with the nickname Mr. Reliable. The fullback was strong at both ends of the field with five assists and 44 chances created in attack and winning 76.9 percent of tackles, the fourth-highest success rate among those with at least 35 won tackles in the regular season. Davis was also error-averse, opponents only recorded one shot via a defensive mistake of his in the regular season.

DM – Eryk Williamson, Portland Timbers 2 (7.36): Williamson wasn’t as ever-present in T2’s lineup as some of the other players in this group, but when he was, he was a difference-maker. With nine assists and 40 key passes, Williamson averaged 0.68 goals + assists per 90 minutes from a deeper midfield position.

DM – Seth Casiple, Reno 1868 FC (7.34): Casiple’s distribution numbers appear to get him the second nod at holding midfielder with 78 chances created – more than half of which (44) came from open play – and 193 recoveries over the season. Casiple is one of those who could feel unlucky not to have seen his assists total (7) be higher as he averaged 3.15 chances created per 90 minutes, but Reno ranked second in the Championship in Big Chances Missed as a side.

RW – Leo Fernandes, Tampa Bay Rowdies (7.42): Fernandes was one of only five players to record double-digit assists this season, and he achieved most of his success from open play. Fernandes posted 79 percent of his chances created (52) outside of set pieces, a higher rate than Solomon Asante, and he also put in positive numbers on the defensive side of the ball sitting above 54 percent in duels, aerials and tackle success.

AM – Solomon Asante, Phoenix Rising FC (8.19): It’s hardly a surprise that the record-holder for assists (17) and most combined goals and assists (39) in a regular season sits way above the pack, but sitting 0.7 points higher than your nearest rival is still really something. Sharp finishing elsewhere helped Asante’s assists cause, but with 90 chances created and 123 shots in the regular season, Asante was constantly active in the final third to the tune of 1.28 goals + assists per 90 minutes.

LW – Junior Flemmings, Phoenix Rising FC (7.46): Flemmings’ 22 combined goals and assists were matched by others in the league, but the Jamaican put up those numbers at a better efficiency rate than everyone outside of Real Monarchs SLC forward Douglas Martinez. With four goals from outside the penalty area, tied for third in the league, and a 22.1 shot conversion rate, Flemmings was prolific and efficient this season in a little over 2,000 minutes of action.

F – Adam Jahn, Phoenix Rising FC (7.32): Jahn’s consistency appeared to see him grade out at the top of the list of forwards as his 17 goals, five assists and 35 chances created left him consistently threatening opposing defenses. The one underrated stat for Jahn as well? His 39 clearances (which included 23 headed clearances) to help his back line defend set pieces over the course of the season. 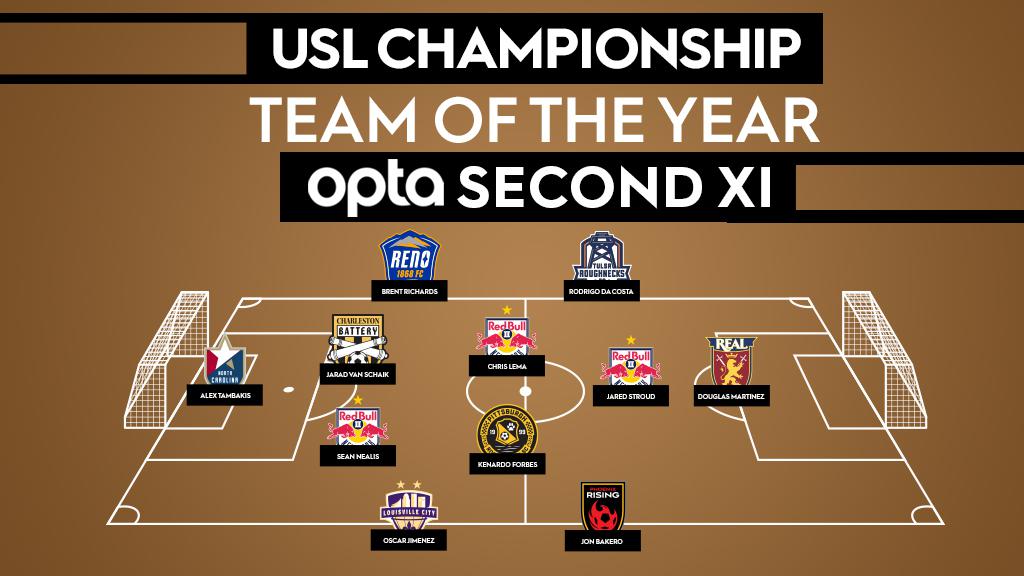 GK – Alex Tambakis, North Carolina FC (6.71): Tambakis earns selection to this squad due to the volume and consistency of his shot-stopping throughout the season. His save percentage of 75.21 was the highest among the top ten goalkeepers in saves in the Championship as he averaged 3.14 saves per game on the year.

FB – Brent Richards, Reno 1868 FC (7.13): Richards rated consistently throughout the season as one of the best two-way full backs. Among defenders with at least four assists in the regular season, Richards led the group with 66 interceptions and 93 clearances as well as winning 204 of 304 duels, a success rate of 67.1 percent.

CB – Jarad van Schaik, Charleston Battery (7.06): Van Schaik took a move back in the lineup for the Battery this season to slot in alongside Taylor Mueller at center back, but the instincts he held as a defensive midfielder still shone through. The 30-year-old led the Championship with 83 interceptions in the regular season while also winning 66.2 percent of duels and 69.4 percent of aerials.

CB – Sean Nealis, New York Red Bulls II (7.05): With 20 appearances, Nealis won’t have the cumulative statistics like some players here, but he was consistent in his performances to the effect of helping the Red Bulls II to a 13-3-4 record when he was in the lineup. Nealis scored three goals, won 64.7 percent of duels, 65.6 of tackles and 69.4 percent of aerials in his regular-season action for the side.

FB – Oscar Jimenez, Louisville City FC (7.16): Jimenez continued to be a chance creation machine for Louisville as he finished tied for second in the league with 90 chances created and posted seven assists, more than half of which came courtesy of his dead ball acumen. Jimenez also won 70.5 of his tackles and recorded 191 recoveries to hold up his end defensively for LouCity.

DM – Chris Lema, New York Red Bulls II (7.30): It’s partly a function of how the Red Bulls II play, seeing as how the side led the league in shots, but no-one in the regular season recorded more chances created than Chris Lema, who posted 94 in the regular season. That only resulted in six assists, but add in 22 shots on goal out of 63 shots overall and it shows how adept the central midfielder was at joining the attack while also winning 70.6 percent of tackles and ranking third among outfield players with 263 recoveries.

DM – Kenardo Forbes, Pittsburgh Riverhounds SC (7.26): Forbes continued to be one of the best playmakers in the league this season as he led the Championship with 21 Big Chances Created among his nine assists and 74 chances created overall. Forbes’ defensive positioning was also a big plus for the Hounds as he led the Championship’s outfield players with 291 recoveries while finishing as one of seven players to complete at least 1,500 passes in the regular season.

RW – Jon Bakero, Phoenix Rising FC (7.30): Injuries limited Bakero’s playing time with Phoenix on loan from Toronto FC, but when he was in the lineup the attacking midfielder was stellar. Bakero recorded 3.23 chances created per 90 minutes to go with five assists, had a pass accuracy rate of 84.4 percent on 60.6 passes per 90 minutes and recorded 6.3 recoveries per 90 minutes for his side.

AM – Jared Stroud, New York Red Bulls II (7.41): Stroud ranked fifth overall in the ratings as he just came up short of a double-double with 15 goals and nine assists, but has the misfortune of taking the same slot as this year’s top-ranked player in Solomon Asante. The former Colgate University standout registered the same number of chances created as Asante (90) in New York’s high-volume attack as he also recorded 18 Big Chances Created in the regular season.

LW – Rodrigo da Costa, Tulsa Roughnecks FC (7.28): Da Costa also just missed out on a double-double with nine goals and 13 assists, which put him second in the league for helpers. The biggest bright spot of the Roughnecks’ season, Da Costa had some other positives including winning 66.7 percent of tackles, but his attacking numbers were the biggest driver to an impressive overall rating.