MURRAY: Season Ended in Disappointment, but Hounds are Primed for Liftoff

Lilley’s squad made indelible mark on city in 2019, and the future looks even brighter 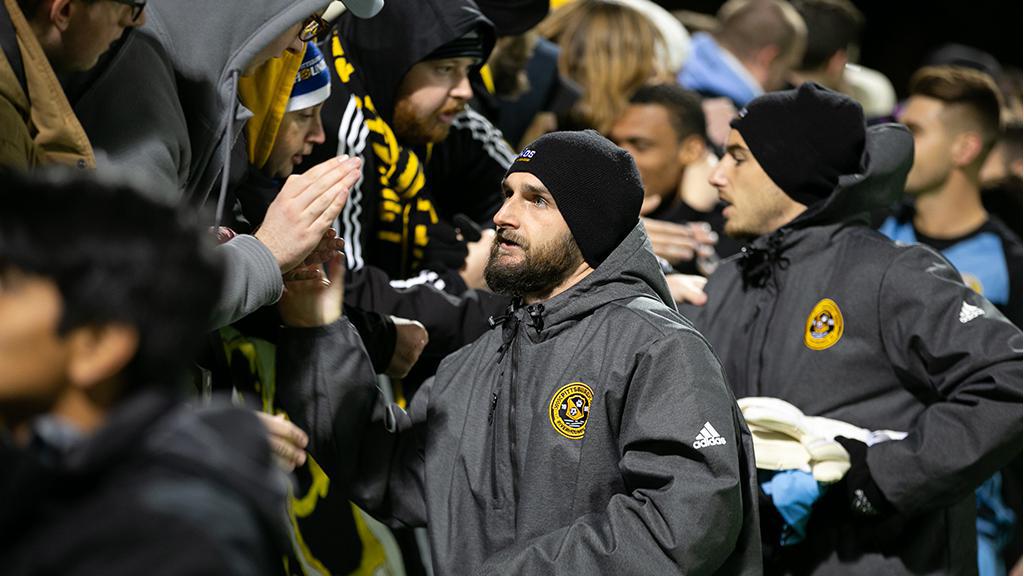 PITTSBURGH – It wasn’t the way Pittsburgh Riverhounds SC’s 2019 season was supposed to end.

Playing in front of a Highmark Stadium-record crowd of 6,074 fans that packed the venue on the banks of the Monongahela River to the brim, the 118th-minute gut-punch delivered by Louisville City FC’s Paolo DelPiccolo handed the Hounds their first home defeat in more than a calendar year and brought the curtain down on the most memorable season in the club’s history.

If there’s anything to take away from Saturday night, however, it’s that the Hounds are now a strong part of Pittsburgh’s sporting family. A 35 percent rise in average attendance during the regular season was topped by two consecutive weeks of record crowds in the USL Championship Playoffs, showing the rising connection the Hounds are creating with their fans.

“Crowd was great,” said Hounds Head Coach Bob Lilley. “It's disappointing. We had all home games left, I know we haven't lost in over a year at home. It's a tough way to end the season. I'm proud of them for the year they had.”

It’s been an upward climb for the Hounds to get here. The opening of Highmark Stadium in 2013 was intended to bring a new era to the club, but ups and downs on the field and strength of the city’s traditional teams in the Penguins, Pirates and most of all Steelers meant the relatively new kid on the block still had difficulty finding its niche.

Now, though, the Hounds are a force of their own. There was the rebrand prior to the 2018 season, introducing a new crest and a move to the gold and black colors that have been a staple in the Steel City for decades. There was the hire of Lilley and the acquisition of talent that made the Hounds a team that both had a strong backbone, but also the ability to thrill in attack.

And then there was the work of the front office, which was diligent in selling this team to a passionate sporting city that only had to visit Highmark Stadium once to be sold on what was being built right before its eyes.

More than anything, though, there was Tuffy.

It’s sometimes easy to see club owners as separate from the fanbases their teams represent. That couldn’t be further from the case with Hounds owner Tuffy Shallenberger, who has lived and died with this team every game as though he was in the middle of the Steel Army every game.

Thank You PITTSBURGH!! You came out in full force. You proved that Pittsburgh is a soccer city. I am sorry we could not deliver tonight. The foundation is built!!

Huge thanks to @Tuffy_Shall for his commitment to soccer in Pgh. Way too fun to hang out with 6k soccer fans for a night, W- L- or T. I’ve sat in this section when there was 800 for rainy opener in 16’. Makes us appreciate was accomplished 18+19’ pic.twitter.com/notSmYh99S

We love you @Tuffy_Shall & our Hounds. Great season. Thank you @SteelArmy for building up the base. And thank you to the Coaches, Team, Staff & Fans that moved Pittsburgh soccer so much forward in one year. 2020 lots to look forward to in making Pittsburgh a soccer City!!! https://t.co/BXlDImPwGB

Each time, I'll answer, 'The one from Pittsburgh.'

There are more people like that today than ever. Credit @Tuffy_Shall, everyone at @RiverhoundsSC and, of course, @SteelArmy. This was the franchise's greatest year. #DKPS #Hounds pic.twitter.com/grnqYmTmCA

This, though, feels like it’s just the beginning of something bigger. The Hounds earlier this year unveiled plans for a new training facility in Coraopolis, Pa. that in partnership with Highmark Health and Allegheny Health Network will provide a first-class training facility for the Hounds and the club’s academy program as well as a 20,000-square-foot AHN medical facility that will serve the local community.

The team on the field figures to remain a contender in the Championship with Lilley at the helm and a strong core of players that clearly love the atmosphere the growing fanbase produces game-in and game-out.

And those fans? Saturday night showed that after the best year in the club’s history came up short of a title, they’re hungry for more in 2020 and beyond.

Still coming to terms with no more Hounds this year. Looking back on the season today, @RiverhoundsSC, @Tuffy_Shall and EVERY PLAYER exceeded our expectations. Not one of you should hang your head over 2019. Keep looking forward to an even more exciting 2020. Thank you all!

Heartbreaking loss last night for the @RiverhoundsSC , but what a great crowd (6,100) and great season!

Gutted by last night's result, but I'll forever be grateful for the historic season that we had @RiverhoundsSC It was an incredible year with a great group of guys and amazing fans @SteelArmy . Although we came up short in the end I hope the city of Pittsburgh is still proud.

It was a long, disappointing 2 hour hide home last night. But, I am so proud that @RiverhoundsSC showed that Pittsburgh is a soccer town. Enjoy the off season and next year, #TogetherWeHunt further! #UNLEASH https://t.co/ACVhMmthA6

So, buckle up, Pittsburgh. Your Hounds are ready for liftoff.