NASHVILLE, Tenn. – A second-half goal by Tyler Pasher proved the difference as No. 3 seed Indy Eleven eliminated No. 2 seed Nashville SC with a 1-0 win in the Eastern Conference Semifinals of the 2019 USL Championship Playoffs in front of 4,174 fans at First Tennessee Park on Saturday night.

Pasher’s goal – Indy’s first in three competitive games this season against Nashville – sent the Eleven through to host the Eastern Conference Final, where they will face No. 4 seed Louisville City FC next Saturday afternoon at 3 p.m. ET at Mike A. Carroll Stadium.

Indy took the initiative early on, controlling the majority of possession, and in the 20th minute it had the first serious effort on goal as Kenney Walker fired a shot from 20 yards that was parried away by Nashville goalkeeper Matt Pickens. Indy’s Dane Kelly also forced a low save from Pickens in the 29th minute on a first-time shot from the left side of the penalty area.

Nashville was reduced to half-chances for the opening half-hour, but in the 37th minute Alan Winn fired a low effort on goal from 25 yards that forced Indy goalkeeper Jordan Farr into action. A minute later Winn again threatened as he drove into space on the right side of the penalty area but slid his shot just wide of the left post. Indy ended the half on the front foot, however, as Pasher’s long-range effort was kept out by Pickens.

The hosts had the first big chance after the break as a cross from the right was controlled by Rios, who hit a turning shot to the left corner that was turned away by an outstanding save from Farr.

After buzzing around the attacking third for much of the game, however, it was Pasher that put Indy ahead in the 59th minute. The Canadian’s run in behind the Nashville defense was picked out by a perfectly lifted through-ball by Tyler Gibson, and Pasher put home a first-time finish with the outside of his left boot from the right side of the penalty area into the bottom-left corner. 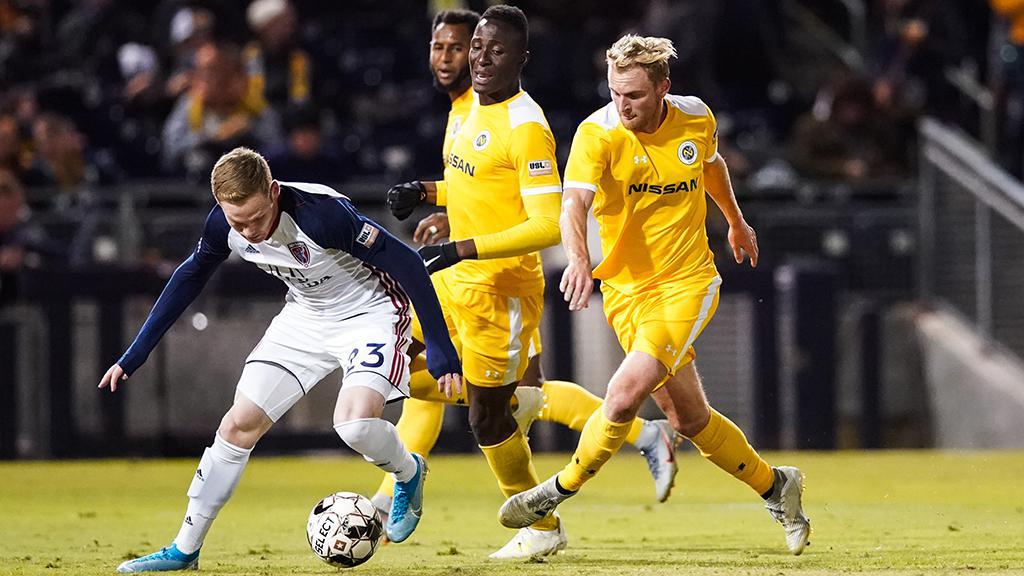 Indy Eleven's Tyler Pasher broke the deadlock in the 59th minute to send the visitors through to the Eastern Conference Final of the 2019 USL Championship Playoffs on Saturday night. | Photo courtesy John Wilkinson III / Nashville SC

Nashville pushed numbers forward to try and find an equalizer, and second-half substitute Kharlton Belmar threatened with four minutes to go with a low shot that was blocked by Indy defender Karl Ouimette at the top of the six-yard area. The hosts then had the ball in the net with a minute to go through Justin Davis, but he was correctly ruled offside as he redirected home a shot by Matt LaGrassa.

Indy’s defense bent but did not break, though, as Nashville was unable to summon the late-game heroics that had marked its late run in the regular season, sending the Eleven through to host the Eastern Conference Final.