PITTSBURGH - Paolo DelPiccolo’s header in the 118th minute sent No. 4 seed Louisville City FC to its fifth consecutive Eastern Conference Final with a 2-1 comeback victory over No. 1 seed Pittsburgh Riverhounds SC on Saturday night at Highmark Stadium in the Eastern Conference Semifinals.

Louisville will hit the road once again next weekend for the Eastern Conference Final where the side will face No. 3 seed Indy Eleven.

The hosts looked to get out on the front foot early and nearly took the lead in the 10th minute as Kevin Kerr teed up Mouhamed Dabo on the edge of the penalty area, but the Hounds midfielder saw his right-footed shot spectacularly tipped over the crossbar by a diving Chris Hubbard.

The Louisville goalkeeper had little chance on the ensuring corner however, as he couldn’t reach Kenardo Forbes’ in-swinging delivery before it found the head of Pittsburgh defender Thomas Vancaeyezeele and whizzed into the top right corner of the net to give the home side the lead.

The visitors were able to tighten things up at the back after going behind – with Hubbard only having to parry away a long-range effort from Neco Brett just before halftime – but LouCity struggled to break down a well-organized Hounds defense in the opening 45 minutes.

Brett had a glorious chance to double Pittsburgh’s lead four minutes into the second half when LouCity midfielder Napo Matsoso was harried into a poor back pass that sent the Hounds forward clean through on goal, but he didn’t get enough power on his shot after rounding Hubbard, which allowed Louisville center back Paco Craig to get back in time to clear the ball off the line.

The visitors needed just two minutes to take advantage of the missed opportunity as Luke Spencer expertly controlled Oscar Jimenez’s long ball between a pair of defenders before firing a low left-footed shot beyond the reach of Pittsburgh goalkeeper Kyle Morton to equalize with his side’s first shot on target in the 51st minute. 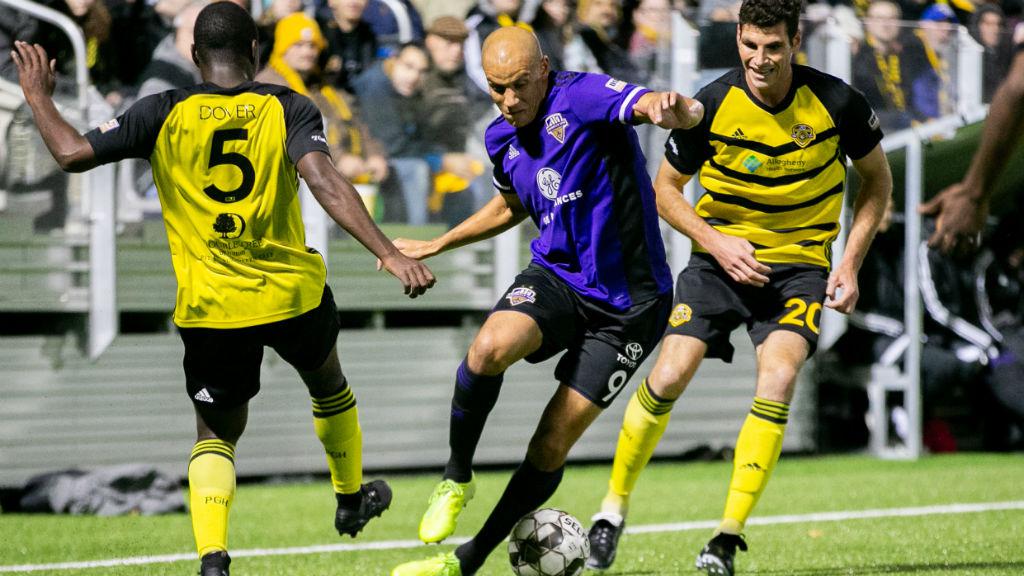 The contest got a little bit chippy from there, as Louisville’s Pat McMahon picked up a yellow card three minutes after the equalizing goal and Craig and Spencer soon joined the defender in referee Michael Radchuk’s book.

Despite racking up the hard challenges and yellow cards, Louisville also came closest to a winner in regulation as Brian Ownby picked up a loose pass and dribbled to the top of the box before flashing a shot through the legs of a Hounds defender and just wide of Morton’s right-hand post with seven minutes remaining.

The visitors continued to push for a winner in the opening half of extra time and nearly found it in the 94th minute when substitute Paolo DelPiccolo played Ownby in on the right side of the box, but Morton came off his line quickly to close off the angle and made a strong low save.

The Pittsburgh goalkeeper was beaten 11 minutes later by substitute Abdou Thiam, who found some space in the center of the Pittsburgh defense to receive a pass from George Davis IV and fired a right-footed shot from the top of the box that caromed back into play off Morton’s left-hand post.

Louisville’s pressure eventually paid off late in the second half of extra time, as Morton made a splendid initial save to deny Thiam from in close but DelPiccolo followed up on the rebound and planted a firm header into the empty net from six yards out to keep his side’s chances of a third straight title alive.

Paco Craig, Louisville City FC – Craig won 13 of 18 duels, made 10 recoveries and a crucial clearance off the line early in the second half to keep Louisville within a goal while also completing 76 percent of his passes.