Behind goals from Jack Blake and Maikel Chang, No. 4 seed Real Monarchs SLC took a 2-1 victory to bring to an end the dream season of No. 1 seed Phoenix Rising FC in a tense Western Conference Semifinals matchup in the 2019 USL Championship Playoffs and send home a sellout crowd of 7,548 fans at Casino Arizona Field disappointed.

The Monarchs will play host to the Western Conference Final on Saturday, November 9 at 3 p.m. ET when they host the winner of Saturday night’s second semifinal between No. 6 seed El Paso Locomotive FC and No. 7 seed Sacramento Republic FC.

Real created the first opening of the game in the fourth minute when Noah Powder came up to join the attack on the right, played a one-two with Blake at the top of the penalty area that gave him a look on goal from 20 yards that he sent wide of the right post.

Phoenix began to take the upper hand after a quiet start, however, and Joey Farrell forced a save from Real goalkeeper David Ochoa in the sixth minute after the hosts were able to recycle a corner kick from the right, allowing Joey Calistri’s cross to find him at a narrow angle on the left side of the penalty area. Jon Bakero then curled a free kick just wide of the right post, and Corey Whelan sent a cross from the right just too high for Junior Flemmings at the back post as Phoenix pressed for the opening goal.

Real came back into the game after the spell of pressure, but Rising FC took the lead in the 25th minute as its attacking triumvirate produced a brilliant sequence. Solomon Asante began the move from inside his own half on the right as he found Adam Jahn checking to the ball, and the center forward’s turning pass released Flemmings as he broke forward behind the Monarchs’ defense. With space to run, the Jamaican international slid home his finish into the left corner of the net past the advancing Ochoa.

The Monarchs had a big chance to respond in the 32nd minute when Tate Schmitt, Blake and Chang sprang forward after an interception near the halfway line, only for Chang’s free look from 15 yards to go wide of the right post. A minute later, however, Blake leveled for the visitors as he took advantage of another turnover and sent home a finish from 20 yards into the left corner of the net.

Chang had a chance to put the Monarchs ahead a further minute on as he backed down a defender but flashed his shot just over the crossbar from the top of the penalty area. The Cuban found the net two minutes before halftime, however, as he took a tight-space pass from Powder inside the penalty area, turned inside to his left and squeezed home a finish to the bottom-right corner. 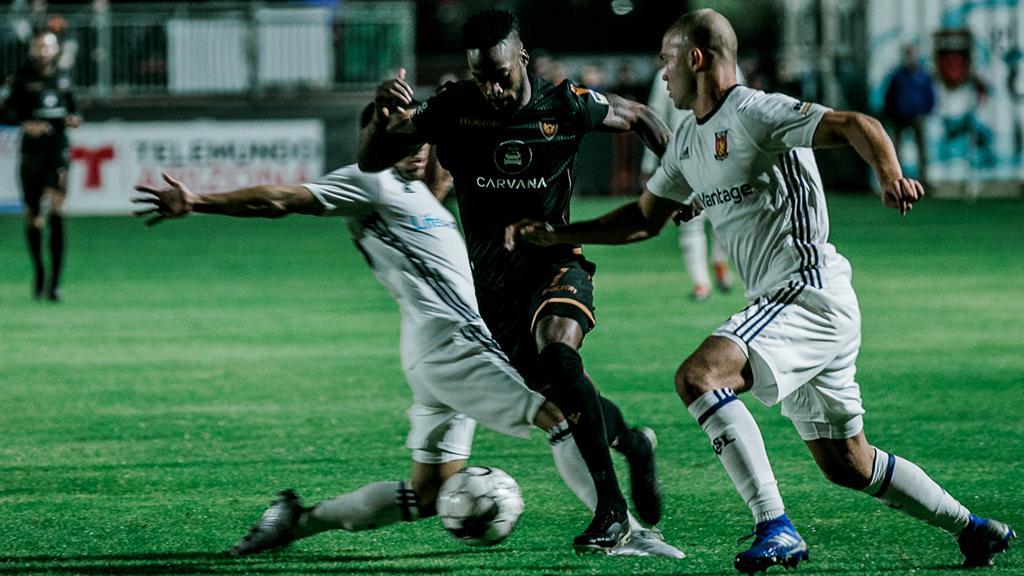 Junior Flemmings found the net for Phoenix Rising FC, but responses to his opener by Real Monarchs SLC's Jack Blake and Maikel Chang sent the visitors to victory at Casino Arizona Field and into the Western Conference Final. | Photo courtesy Ashley Orella

Phoenix had a chance to even things six minutes into the second half when a turnover off a throw-in by the Monarchs in their own half came to Asante in the right channel, and his chipped cross toward the penalty spot was headed just wide of the left post by Jahn. The hosts continued to hold the upper hand as the hour-mark approached when Bakero sent a finish high from the top of the penalty area after a low cross by Asante from the right was half-cleared by the Real defense.

After limited looks on goal for much of the half, however, Rising FC had a golden chance to equalize with 15 minutes to go. A free kick from 25 yards out beyond the top-left corner of the penalty area was delivered by Bakero to the back post where Jahn rose to deliver a powerful header on goal. Ochoa managed to palm away the effort, but Joey Farrell was unable to control the rebound as the bounce off the turf saw it carom off his knee and over the crossbar from inside the six-yard area.

The Monarchs had to absorb plenty of pressure over the second half but had two late chances to ice the game inside the final 10 minutes. First, Luke Mulholland played in Martinez on a breakaway chance but the Honduran international’s one-on-one chance from the right side of the penalty area was turned away by Lubin. Rising FC’s shot-stopper came up big again a minute later as he parried away a snap-shot by Blake wide of the right post, and the Monarchs saw a claim for a penalty waved away when it appeared Lubin may have brought down second-half substitute Luis Arriaga five minutes from the end.

From there, it was all hands to the pump for the visitors as Rising FC piled on pressure into stoppage time, but the Monarchs withstood the barrage of crosses and corners to walk away with a place in the Western Conference Final.