SCOTTSDALE, Ariz. – Sealing its win after nine rounds of penalty kicks, No. 1 seed Phoenix Rising FC advanced to the Western Conference Semifinals over No. 8 seed Austin Bold FC after 120 minutes of scoreless action saw the hosts down their counterparts from the spot.

Phoenix will now return to Casino Arizona Field next weekend to host No. 4 seed Real Monarchs SLC after their 6-2 win over Orange County SC on Saturday.

In its home confines where it has enjoyed much success on the attacking end, Phoenix began to threaten the Austin goal after the first quarter of an hour, with forward Adam Jahn rattling the crossbar with a header in the 16th minute. The hosts continued to knock on the door and again nearly broke through when, in the 33rd minute, Bold FC goalkeeper Diego Restrepo came off his line to punch delivery from a corner into the air and away from goal, but in doing so left Phoenix forward Junior Flemmings with an opportunity to volley the clearance back on goal only to see Austin defender Gustavo Rissi clear the chance off his own line.

Flemmings again presented a threat in the 36th minute off a set-piece routine on the left side that saw Flemmings whip a cross-cum-shot toward the back post, narrowly missing the woodwork on its way through everyone and over the endline for a goal kick. Against the run of play, Austin’s biggest opportunity in the first half came just before the whistle for halftime when midfielder Edson Braafheid played in teammate Ema Twumasi on goal, but Twumasi’s attempt to round Phoenix goalkeeper Zac Lubin was thwarted to keep the score level through the first 45 minutes.

The second half saw the Championship Regular Season Title-winners sing the same tune as they looked to break the deadlock, but Austin had the first golden look on goal when forward Andre Lima’s header in the 55th minute went just wide of Lubin’s left side and out. Pushing ahead, Phoenix created another great chance in the 77th minute when Flemmings got on the end of a long ball over the top and turned past a defender, only to see his cross eventually cleared by Bold FC defender Jermaine Taylor.

Despite late pushes by both sides in eight minutes of added time at the end, the deadlock carried over through 90 minutes meaning the two sides would battle for a winner in extra time. 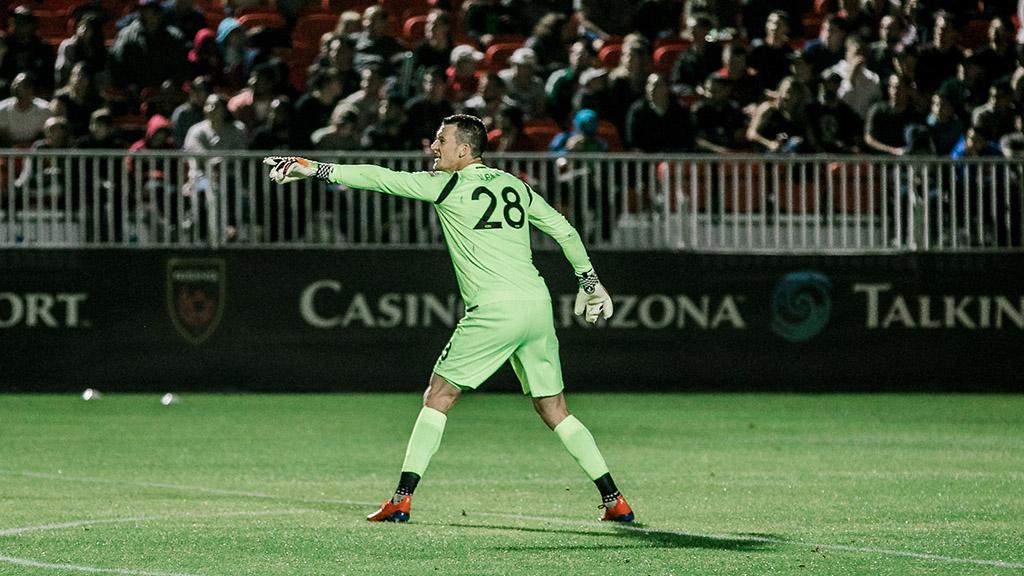 The visitors started strong and looked to build off momentum created at the end of regulation time, creating the best chance of the opening period of extra time when forward Kris Tyrpak laid off a pass for Twumasi, who forced an incredible reaction save out of Lubin to keep things level. Then, Bold FC substitute Francis Atuahene needed just one minute to force Phoenix into a sweat as he cut toward the byline and ripped a shot across goal that could not nestle into the side netting as the chance went begging. On the other end, midfielder Kevon Lambert had a header saved point-blank by Restrepo on the line after a set-piece ball to the back post nearly became the difference maker.

Into the second half of extra time, the intensity and focus maintained by both teams only increased and especially on the defensive side of the ball. Bold FC had a brief look at goal in the 107th minute when Atuahene cut in and flashed a shot at goal but he could not hit the target having aimed at the near post. In the 120th minute, Austin had one more look at goal when a ball swept in across toward Tyrpak saw the forward attempt to flick past the Phoenix defense, only for Rising FC defender Joey Farrell to produce a vital block to prevent a late winner. Through regulation and both periods of extra time, neither side could find a goal as the game finished on penalty kicks.

Both teams converted their first spot kicks, but Lubin got a strong hand to Thomas de Villardi’s penalty to keep it out before Jon Bakero gave Phoenix the advantage after two rounds by converting his chance. Then, after both teams converted their penalties in the third round, Austin’s Josué Soto converted his chance before Restrepo stopped Lambert’s penalty to even things after four rounds. Into the ninth round, Austin’s Jermaine Taylor stepped up to the spot and fired his penalty straight down the middle at Lubin, who palmed it away to again give his team an advantage. At the penalty spot with a chance to seal the win, defender A.J. Cochran sent Restrepo the wrong way, scoring his penalty to send the No. 1 seed through.

Zac Lubin, Phoenix Rising FC – Lubin was immense in the penalty shootout that saw Phoenix advance to the Western Conference Semifinals, stopping two of Austin’s nine penalties in the win, while also making five saves and three punches in an impressive 120 minutes of play.