RENO, Nev. – For a second consecutive contest, No. 7 seed Sacramento Republic FC had to rally from an early deficit, but goals by Cameron Iwasa and Thomas Enevoldsen five minutes apart in the second half lifted the visitors to a 3-1 victory against No. 2 seed Reno 1868 FC as they advanced to the Western Conference Semifinals of the 2019 USL Championship Playoffs at Greater Nevada Field on Saturday night.

Sacramento will visit the winner of the contest between No.3 seed Fresno FC and No. 6 seed El Paso Locomotive FC after holding the upper hand over its Donner Pass Derby rivals in their first meeting in the postseason.

1868 FC got out to an ideal start in the fifth minute as a pass by Republic FC midfielder Drew Skundrich intended for goalkeeper Bobby Shuttleworth was intercepted by Corey Hertzog, allowing the Reno forward to finish into an open net to put the hosts head.

Sacramento responded quickly, however, and three minutes later drew level when Juan Barahona was released into the left side of the penalty area by Iwasa before he delivered a low cross that was volleyed home by Sam Werner into the roof of the net.

The hosts had the better chances in the remainder of the first half – Eric Calvillo flashed a shot wide of the right post just past the half-hour mark – and Reno almost caught a break four minutes before halftime when a shot by Hertzog took a deflection off Raul Mendiola and forced Sacramento goalkeeper Bobby Shuttleworth to recover quickly and make the save.

Reno’s Aidan Apodaca then forced a big save from Shuttleworth in first-half stoppage time as his header from Lindo Mfeka’s corner kick from the left was just parried and then cleared away to keep the game level at the break. 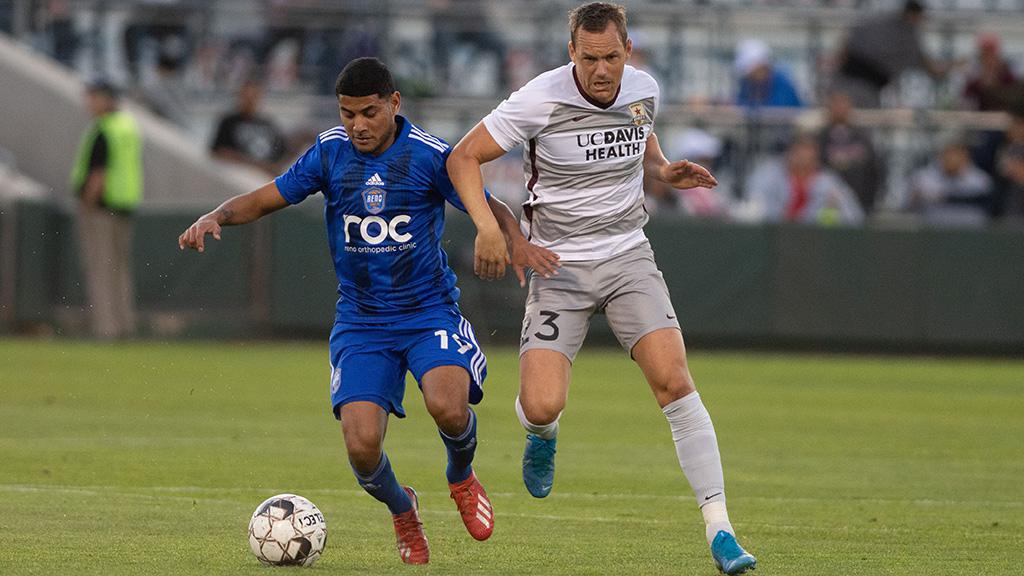 Sacramento Republic FC's Thomas Enevoldsen was among the goalscorers as his side took victory on the road against rival Reno 1868 FC on Saturday night. | Photo courtesy David Calvert / Reno 1868 FC

Sacramento came out more brightly to start the second half as an angled cross from the left by Barahona found Enevoldsen for a glancing header that went just wide of the right post. The Dane went close again in the 62nd minute as Reno goalkeeper Matt Bersano just got a hand to his shot from 25 yards that turned it off the foot of the left post.

With 20 minutes to go, however, Republic FC broke through as Villyan Bijev seized on a poor defensive touch and produced a good first-time pass that played Iwasa in between defenders. Republic FC’s all-time leading scorer made no mistake with a low finish to the right corner from 15 yards out.

Five minutes later, Enevoldsen seemingly wrapped up the victory as Iwasa lifted a through-ball into the penalty area intended for the cutting run of Darek Formella, but Enevoldsen swooped in to provide a finish to the right corner that gave the visitors a two-goal edge.

Iwasa had a chance to add another with seven minutes to go as his low shot from the right side of the penalty area was saved by Bersano, but while Reno threw numbers forward late it was unable to find a reply. Thomas Janjigian had a header off a corner by Seth Casiple from the right that was blocked away to safety, while Duke Lacroix had a pair of chances in stoppage time, but Sacramento held firm to move on to the delight of its travelling support.

Thomas Enevoldsen, Sacramento Republic FC – Enevoldsen put the game away with his sharp finish and had a solid all-around game, completing 27 of 32 passes and recording two key passes and five shots.