Hosts lifted over Charleston off goals by Moloto, Ríos, and Jones

NASHVILLE, Tenn. – Hosting its first playoff game, Nashville SC advanced to its first Eastern Conference Semifinal after defeating the Charleston Battery, 3-1, at First Tennessee Park thanks to goals first half goals by Lebo Moloto and Daniel Ríos that were separated by a Zeiko Lewis penalty.

Nashville will now return to First Tennessee Park next weekend to host No. 3 seed Indy Eleven after its 1-0 win against No. 6 seed New York Red Bulls II.

The hosts were patient coming out of the gate, poking around the Battery defense as they waited to pick their moment. 10 minutes in, Nashville’s Matt LaGrassa pounced on a slow pass from a Battery defender and turned quickly to play in midfielder Lebo Moloto, who slotted past Battery goalkeeper Joe Kuzminsky at the far post to take the lead. Nashville continued to push forward as Ríos and Alan Winn both forced good saves off Kuzminsky but could not double their advantage.

Looking to respond, Charleston’s opportunity came when midfielder Nico Rittmeyer charged into the box chasing a loose ball where he was fouled by Nashville defender Forrest Lasso, conceding the penalty. Stepping up to the spot, Lewis sent Nashville goalkeeper Matt Pickens the wrong way to level the scoring.

Despite giving one back, though, Nashville’s persistence at the other end saw Ríos get on the end of a Justin Davis corner in the 43rd minute to restore the lead as the star forward continued his impressive stretch in front of goal into the playoffs. Seeing out the half, Head Coach Gary Smith’s side went into the break deservedly in front. 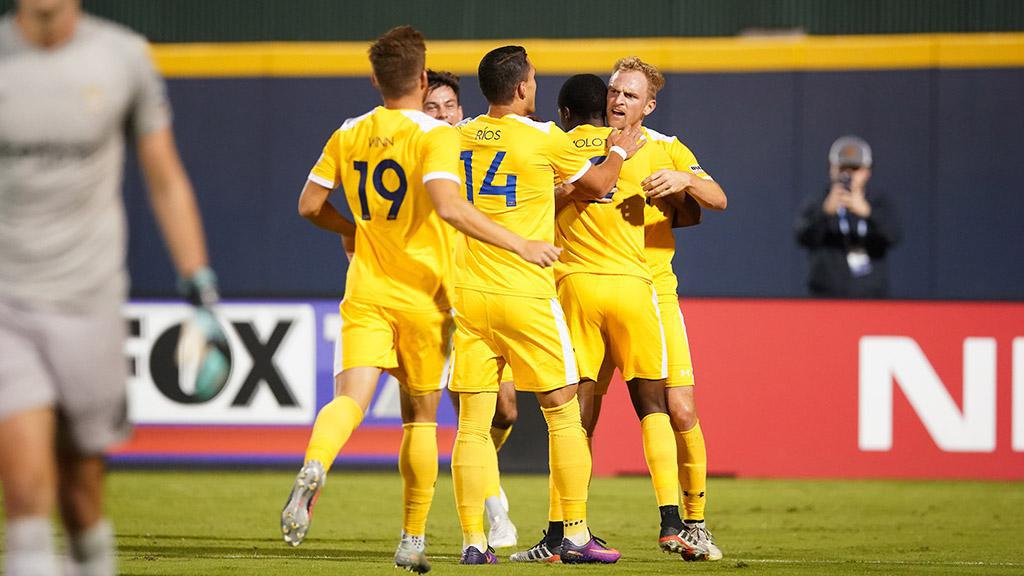 The second half saw the Battery come out the more aggressive of the two sides, with defender A.J. Patterson collecting a pass on the left side and storming ahead before launching a low missile that clanged off the far post and eventually away to test Nashville early on. Then, another scary moment for the hosts came in the 75th minute when Battery forward Ataulla Guerra’s shot from the left side of the box was deflected by Nashville defender Jimmy Ockford and out of play, narrowly missing the inside of the near post.

However, the hosts showed confidence in closing out the final 15 minutes, with Ríos facing another spectacular save out of Kuzminsky after a 1-on-1 in the 86th minute saw the shotstopper meet the end product with a strong left hand. That would not be the end, though, with substitute Derrick Jones putting an exclamation mark on the win with a third goal in the 88th minute. Beating the offside trap and taking the ball down the left, Jones cut in and split two defenders before going to ground and still getting enough on the effort to see it past Kuzminsky at the back post, just seven minutes after coming on.

The win is Nashville’s first at First Tennessee Park after falling on the road in their first playoff appearance last year and will see them welcome the Indy Eleven next weekend, who they defeated 2-0 at home at the end of July.

Daniel Ríos, Nashville SC – Ríos was as active as ever in attack, scoring the winner off a set-piece while creating an additional chance and firing three shots on target in 90 minutes of action.