LOUISVILLE, Ken. – Two goals in the span of 76 seconds led No. 4 seed Louisville City FC to an 11th straight postseason victory at Slugger Field as the “Boys in Purple” defeated the No. 5 seed Tampa Bay Rowdies, 2-1, to advance to the Eastern Conference Semifinals of the 2019 USL Championship Playoffs.

LouCity will now face a trip to No. 1 seed Pittsburgh Riverhounds SC at Highmark Stadium in the next round.

The hosts started off the stronger of the two sides, taking advantage of the torrential conditions to create the majority of the chances early on. Continuing to press the Rowdies’ back line, LouCity got off the mark when midfielder Magnus Rasmussen turned in a pass from midfielder Niall McCabe to open the scoring. Keeping up the fast start, Louisville needed just 76 seconds to find its second goal, again courtesy of Rasmussen, when a loose ball in front of goal saw forward Brian Ownby flick it toward goal before the Dane got an all-important touch to put his side two-up.

Eight minutes later, Louisville’s quest for a third nearly saw former Rowdie turned LouCity forward Antoine Hoppenot get on the end of a well-placed ball from Ownby on the left side, but Tampa Bay defender Caleb Richards raced across to stay tight on Hoppenot and blocked the close-range effort. Just before the break, the Rowdies put a scare in the Louisville defense when midfielder Poku stormed through the hosts’ defense before firing across goal with a shot that landed narrowly wide of the far post. 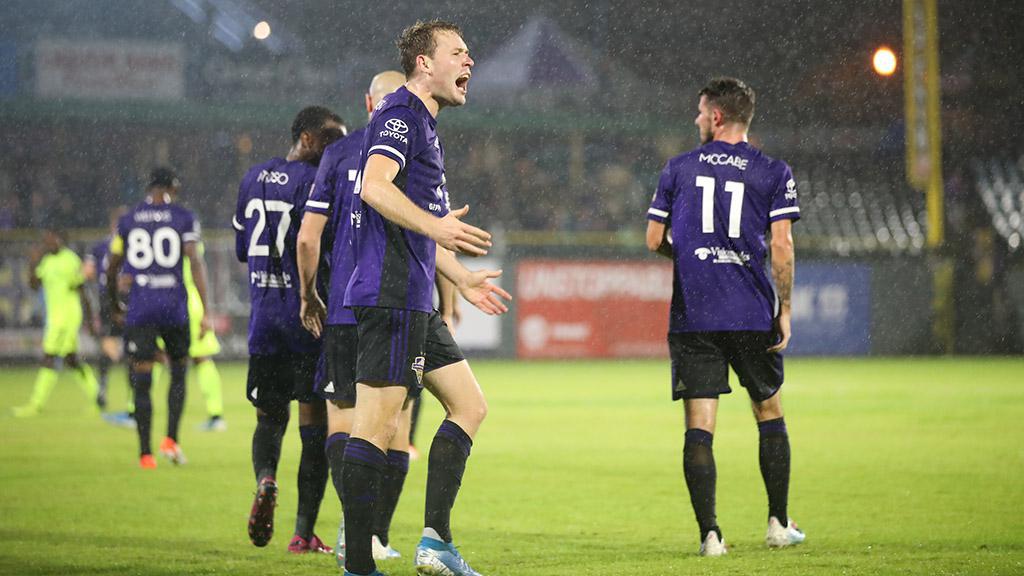 Holding the lead through halftime, Louisville again weathered an early second half storm and appeared to be in full control until near the hour mark, when two substitutions from the Rowdies saw midfielder Zach Steinberger and forward Juan Tejada enter the match. Having near immediate impact, Tampa Bay was able to push up the field more often and put Louisville under consistent pressure.

In the 80th minute, the Rowdies turned up the temperature of the match with Poku again leading the charge when he broke through the LouCity midfield before setting up forward Sebastian Guenzatti from a few yards out, who was able to beat City goalkeeper Chris Hubbard to pull one back. Louisville and Tampa Bay continued to trade shots in the final 11 minutes, with the visitors keener to take risks looking for a vital equalizer. Five minutes of stoppage time allowed plenty of drama to unfold at the end of the match, with Tampa Bay winning a pair of corners, one which saw goalkeeper John McCarthy head a ball across goal for a chance that went begging.

In the end, Louisville City FC survived the late push from the Tampa Bay Rowdies and maintained its unbeaten home streak in the USL Championship Playoffs, advancing to the Eastern Conference Semifinals next weekend.

Magnus Rasmussen, Louisville City FC – Rasmussen was heavily influential throughout his 87 minutes on the field, scoring both of Louisville’s goals while also making four tackles and winning 7 of 8 duels on the night.