PITTSBURGH – Neco Brett and No. 1 seed Pittsburgh Riverhounds SC had a record-tying night as they took a 7-0 victory against No. 10 seed Birmingham Legion FC to advance to the Eastern Conference Semifinals of the 2019 USL Championship Playoffs at Highmark Stadium on Saturday night.

The Hounds became the second team to record seven goals in a USL Championship Playoffs game, matching the total by Orlando City SC in the 2013 USL Championship Final, while Brett’s four-goal haul matched Dom Dwyer’s performance in the same game.

Pittsburgh will next play host to defending champion Louisville City FC on Saturday, November 2nd at 7 p.m. ET for a place in the Eastern Conference Final.

The Hounds opened on the front foot and in the 13th minute took the lead after a wild sequence in the Legion FC penalty area. Robbie Mertz connected cleanly with a first-time shot from 20 yards that rang off the left post and rebounded up off the back of Birmingham goalkeeper Matt van Oekel. Mertz and Steevan Dos Santos tried to put home the rebound, but when the chance went awry, Dos Santos maintained possession and recycled the ball to Mohamed Dabo, who calmly slid the ball to his left to Neco Brett, whose finish deflected off a Legion FC and found the net.

It took only four minutes for Pittsburgh to strike again as Mertz was in the middle of the action again. His cross from the left aimed for Brett was headed into his own net by Legion FC defender Kyle Fisher as Fisher tried to steer the ball away to safety.

Birmingham’s first proper look on goal arrived in the 21st minute when J.J. Williams set up Brian Wright for an attempted lob that Hounds goalkeeper Kyle Morton gathered in comfortably, but inside the opening half-hour Pittsburgh made it three. Dos Santos found space down the right side, and while his first cross didn’t find a teammate, the sliding clearance sent the ball straight back to the Cape Verde forward, who proceeded to pick out Brett for a close-range finish and his second goal of the night. 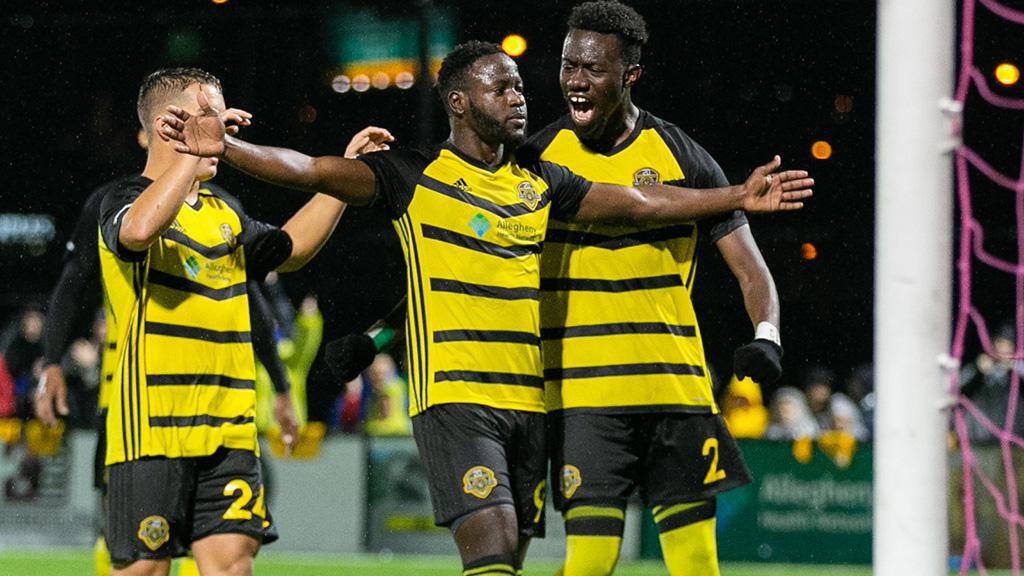 Brett then got the chance to complete a first-half hat trick after he was brought down in the penalty area by van Oekel, and calmly converted to the left corner as the goalkeeper went the other way. The Hounds completed a dominant first half in stoppage time when Jordan Dover added a fifth when he slipped in at the back post to put home a cross from the left by Ryan James with a volleyed finish.

Pittsburgh added to its lead just past the hour-mark as it was awarded a second penalty kick of the night when Zach Herivaux was sent off for denial of a goalscoring opportunity after pulling down Brett in the penalty area, and Mertz converted with a low shot to the left that eluded the dive of van Oekel. Brett then added his fourth – joining Dom Dwyer in becoming the second player in the USL Championship Playoffs history to record four goals in a single game – in the 71st minute as he fired home a low shot to the left corner to wrap up the victory for the East’s top seed.