AUSTIN, Texas – Austin Bold FC cruised into the Western Conference Quarterfinals of the 2019 USL Championship Playoffs as goals in either half earned a 2-0 victory for the No. 8 seed against the No. 9 seed LA Galaxy II on Wednesday night at Bold Stadium.

Bold FC got out to an ideal start in the ninth minute when goalkeeper Diego Restrepo launched a counterattack down the right after claiming a free kick by the Galaxy in his penalty area with an accurate kick in the vicinity of Xavier Baez. The Mexican midfielder won possession with a sliding touch that moved the ball past a Galaxy II defender, and after moving into the penalty area Baez centered for Ema Twumasi to send home a first-time finish from the penalty spot into the right corner.

Austin thought it had doubled its lead seven minutes later as a corner kick by Baez from the right was flicked on by Sean McFarlane at the near post to Andre Lima, who buried a diving header from close range, but McFarlane was ruled to have handled as the goal was disallowed.

McFarlane had a chance of his own five minutes before halftime as broke forward from the back line and ran onto a ball over the top, but his finish was straight at Galaxy II goalkeeper Justin Vom Steeg as he shot from the right side of the penalty area. Los Dos then produced their first big chance of the game in the final minute of the half as a low cross by Kai Koreniuk from the left was met by a cutting Ethan Zubak at the near post, only for Restrepo to make a good reflex stop and keep the hosts ahead. 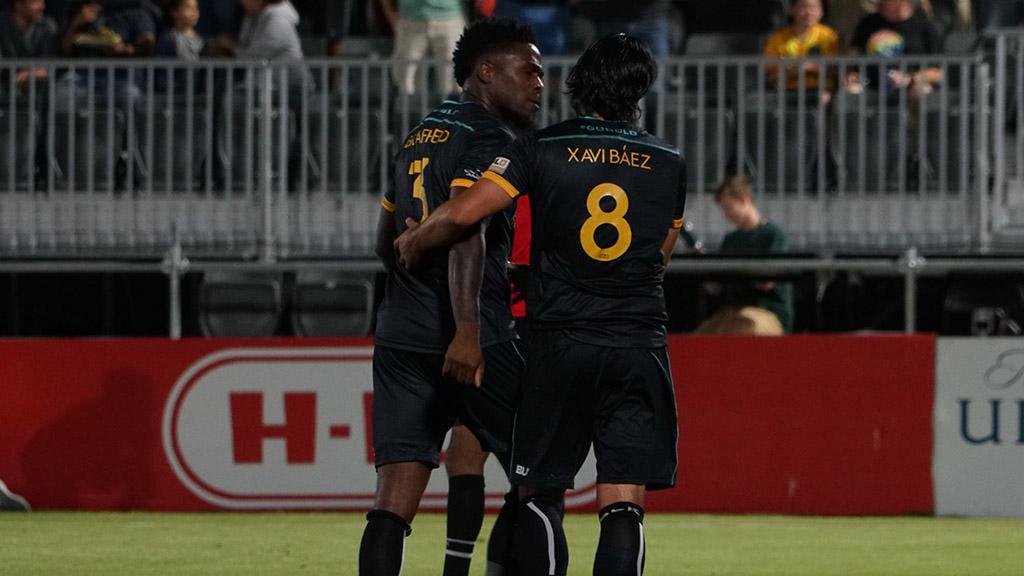 Austin Bold FC midfielder Xavier Baez was a key influence as his side took victory in its postseason debut against the LA Galaxy II on Wednesday night. | Photo courtesy Austin Bold FC

Austin almost struck late in first-half stoppage time as Baez ripped a long-range shot off a free kick just over the crossbar, while Twumasi threatened early in the second half only to have his shot from the left side of the penalty area blocked behind by Galaxy II defender Nate Schulz.

McFarlane got his goal from the ensuing corner kick, however, as he was fastest to react after Baez’s delivery from the left fell just outside the six-yard area and allowed him to poke home a finish into the right corner.

Los Dos tried to find a way back into the game, and Carlos Harvey had a long-range effort saved by Restrepo in the 71st minute. Zubak then almost found space with nine minutes to go but was squeezed by a Bold FC defender before he could get a shot off, but Austin closed strongly as Twumasi almost notched his second of the night on an effort that was kicked wide by Vom Steeg with three minutes to go.

Bold FC wouldn’t need another insurance goal, however, as on a night when it celebrated Isaac Promise in its first home game since the former Nigerian internationa’s passing, the side’s experience saw it claim its first victory in the USL Championship Playoffs at its first attempt.

Xavier Baez, Austin Bold FC – Baez had one assist, four key passes and completed 22 of 25 passes overall to link Bold FC’s midfield and attack together well throughout the night.