The 18 – Reno’s Consistency Making a Mark 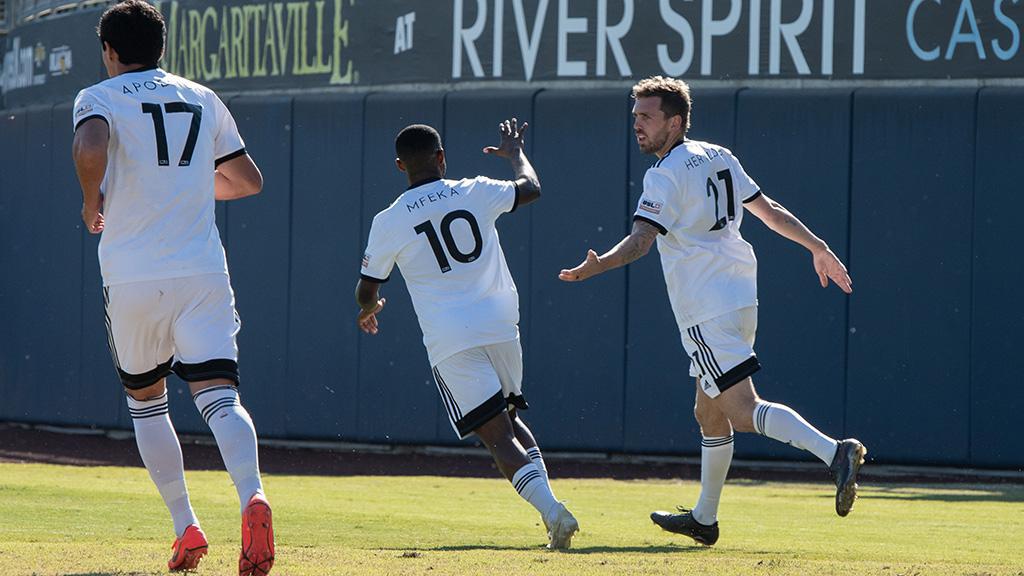 Corey Hertzog's brace on Saturday night gave him 18 goals in the regular season, a personal high for a player who's been one of the top strikers in the Championship's history. | Photo courtesy Lori Scholl / Tulsa Roughnecks FC

Reno 1868 FC’s back-to-back road victories to close out the regular season, capped by Saturday’s 3-0 win against Tulsa Roughnecks FC, may have locked up the No. 2 seed in the Western Conference for the 2019 USL Championship Playoffs, but they also carried an extra significance as the club wrapped up its third regular season in the Championship.

The victory against the Roughnecks placed Reno in elite company when it comes to success over a three-year span, equaling FC Cincinnati’s 51 regular season wins between the 2016-18 season as the most wins over a club’s first three years in the Championship. Reno’s goal differential of +75 also impressively outstripped FCC’s +50 margin.

The consistent success falls on a few heads, notably current President Eric Edelstein and former General Manager Andy Smith, but maybe the most credit should go to Head Coach Ian Russell and players like Brent Richards and Seth Casiple, both of whom have been fixtures in the club’s squad since its launch.

Richards has played in 87 of 100 regular season contests for Reno, while Casiple comes in at 85 games played. That places both just outside the top 20 in games played since the start of the 2017 season – current Real Monarchs SLC standout Maikel Chang tops that list with 97 out of a potential 100 appearances – but the duo, Russell and others have helped instill a positive playing style that has led to consistent success.

2019 has been Reno’s best season yet, earning its highest seeding on the back of a club-record 18 victories, and it looks on paper the side that’s going to be best equipped – in the Western Conference at least – to bring down the dreams of Phoenix Rising FC this postseason.

1. One of the reasons Reno has been able to succeed so consistently is the presence of a standout goalscorer in its squad. After Dane Kelly won the Championship’s Golden Boot award in 2017 with 18 goals, Brian Brown put away 16 goals in 2018 and then added another eight goals in 11 appearances this season to lead the club’s good start.

2. Since Brown’s transfer in July to FK Partizani, however, it’s been Corey Hertzog’s turn to lead the pack. Hertzog’s pedigree in the Championship had been well established by his previous All-League seasons with Pittsburgh Riverhounds SC, but with 18 goals this campaign, 2019 now stands as the veteran forward’s best individual season. Since Brown’s transfer, Hertzog has notched 10 goals, tied for the most in the league in that span, producing a goal every 132.6 minutes on a shot conversion rate of 31.25 percent.

3. Hertzog’s big year has moved him into fourth place in the Championship’s all-time regular season scoring charts with 62 goals in his career. If he can remain hot in the playoffs, it might be time for Reno to make its first deep run in the bracket.

4. Given all of the records it has posted this season, you’ll likely not be surprised to find out that Phoenix Rising FC’s current three-year regular season run has helped it surpass some impressive runs that came prior in the Championship’s history. Rising FC’s victory against OKC Energy FC on Friday night was its 60th regular-season win since the start of the 2017 season, which is five more than any other side has recorded over a three-year span in the league’s history.

5. LouCity’s overlap between 2016-18 and 2017-19 gives a nod to its long-term success, where it has racked up 85 regular-season victories in 158 games since joining the Championship for the 2015 season. (The four-game differential in its two runs comes from regular season length – when 2016 dropped off and 2019 got added, so did four additional regular season contests.)

6. Louisville was one of the big winners from a wild final weekend in the Eastern Conference as its 2-1 comeback victory against Memphis 901 FC saw it jump into a top-four finish as both the Tampa Bay Rowdies and New York Red Bulls II faltered on the road to wrap up their regular seasons. Given that LouCity has never lost a playoff game at Slugger Field in its history – it has gone 10-0-0 at the venue all-time – that’s potentially very good news for the two-time defending champion as it looks to make even more history this postseason.

7. Another big winner? That would be Pittsburgh Riverhounds SC, which saw its persistence pay off in dramatic fashion after knocking on the door relentlessly against Birmingham Legion FC on Sunday evening to get a 90th-minute winner from Mark Forrest that earned the side the No. 1 seed in the Eastern Conference.

8. Who’s Mark Forrest, you ask? Well, he’s certainly not the name you would have expected to produce one of the biggest goals of the Hounds’ season. A rookie forward, formerly of League Two’s Reading United AC and Lehigh University who was selected in the fourth round of the 2019 MLS SuperDraft by the Chicago Fire, Forrest had made only six appearances, registered 95 minutes of action and recorded two shots – one of which had found the target – prior to Sunday.

9. But when Birmingham goalkeeper Trevor Spangenberg – who up until the 90th minute had been spectacular in recording 11 saves – suffered a rush of blood to the head and came for an angled cross from the right toward the top of the penalty area by center back Joe Greenspan, it was the 6-foot-3 Forrest who capitalized, directing his header toward the open net for the first goal of his professional career.

10. By that point, the result didn’t matter much to Legion FC, which had already clinched its place in the playoffs prior to kickoff thanks to Saint Louis FC’s defeat against North Carolina FC the previous day. The outcome magnified the massive victory Legion FC had produced against the New York Red Bulls II on Wednesday night, a performance that Saint Louis wasn’t able to match on the road against NCFC on Saturday that was the final nail in a season that will likely feel was one of unfulfilled promise for STLFC and its fans.

11. Saint Louis certainly could have been part of the playoffs for a second consecutive year, only it failed to grasp the moment as it had done so keenly in its run to the Quarterfinals of the Lamar Hunt U.S. Open Cup earlier in the season. A fourth consecutive defeat to end the regular season saw STLFC record only one shot on goal out of 10 shots overall as an attack that posted only 40 goals in 34 league games proved the fatal flaw of a promising side.

12. Still, Saint Louis’ disappointment didn’t come close to comparing to that of San Antonio FC, which an hour into its contest against Colorado Springs Switchbacks FC had to think its place in the playoffs was secure. Two goals to the good and up a man after Abdul Rwatubyaye had been sent off for the Switchbacks, SAFC should have been able to cruise back into the postseason.

13. Instead, the dream scenario turned into a nightmare as Ebenezer Ackon scored an own goal in the 68th minute before Tucker Bone’s outstanding header off Ish Jome’s free kick leveled things up with eight minutes to go. An offside call with two minutes to go to deny Frank Lopez’s rebound effort – Lopez appeared beyond Switchbacks goalkeeper Abe Rodriguez when Brian Gomez’s shot was struck, leaving only a lone defender between him and the goal line – proved the last chance, and San Antonio was left to wait and watch.

14. No redemption would arrive as first New Mexico United and then the LA Galaxy II took care of business on their home turf to take the final two places in the postseason. “If we’re brutally honest, we didn’t put away chances when we could have and we couldn’t finish the game off,” said SAFC midfielder Jack Barmby. “We conceded two goals against 10 men, we’ve seen it before against RGVFC, and we only have ourselves to blame.”

15. As the news of San Antonio’s result filtered through elsewhere in the Western Conference, it led to the biggest party of the season for New Mexico United as almost 14,000 fans celebrated the club’s playoff berth alongside the likes of UFC fighter and Albuquerque native Holly Holm after a 2-0 win against Las Vegas Lights FC.

16. It may be the No. 10 seed, but having made the playoff field, New Mexico is now looking to its Open Cup experience to carry it on a postseason run. “Every Open Cup match we had was on the road – five extra away matches under our belts – so that’s going to play a really big role in how we play in Sacramento, and trying to progress in the playoffs,” said Head Coach Troy Lesesne.

17. The playoffs await New Mexico and the rest of the qualified teams, but for three clubs that ended the season below the playoff line, the final weeks of the season at least produced some green shoots that could grow into something bigger as each enters the offseason. For the Charlotte Independence, a four-game winning streak to end the year that was capped by Enzo Martinez’s late double against Ottawa Fury FC paints a far rosier picture for 2020 than at the start of this month.

18. Meanwhile, for two of the league’s newcomers, ending the season on a high note is going to make this offseason of work feel that little bit more exciting after Hartford Athletic’s dramatic victory against the Tampa Bay Rowdies at Dillon Stadium and Loudoun United FC’s 7-3 romp past the Red Bulls II at Segra Field. There may be no competitive games left to play for each side this year, but there can be justified optimism as to what Year 2 could hold for each.