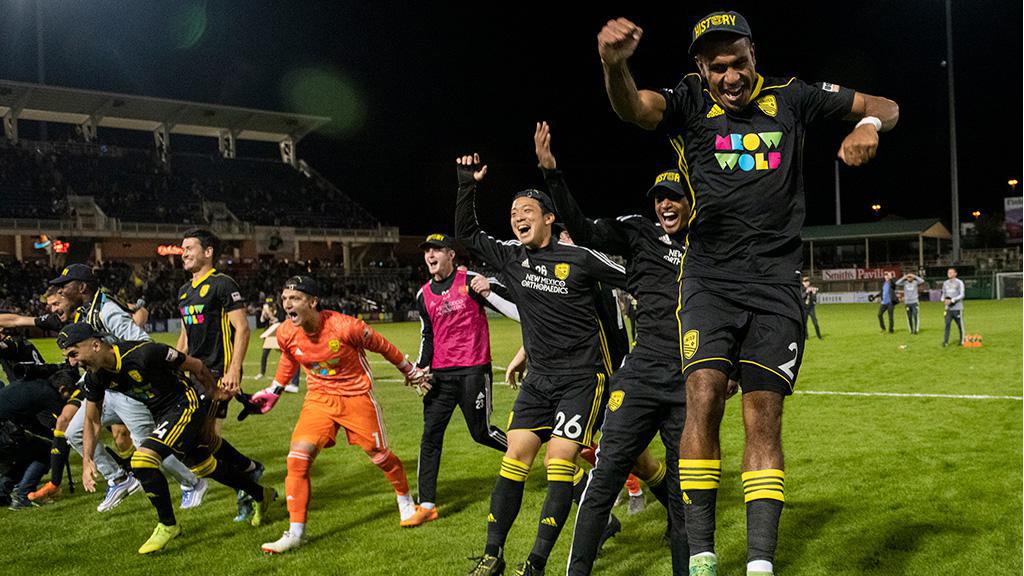 ALBUQUERQUE, N.M. – The plan was a good one, in theory.

While New Mexico United entered Saturday night’s game against Las Vegas Lights FC at Isotopes Park knowing it was going to need help to reach the 2019 USL Championship Playoffs, there was to be no announcement of what was happening in the games featuring San Antonio FC or the LA Galaxy II – one of which needed to drop points to allow NMU a pathway to the postseason – on the Public Address.

The club’s front office even asked the almost 14,000 fans on hand – many of whom had one eye on what was happening elsewhere as their club’s fate hung in the balance – to not chant about any potential good news coming from elsewhere.

But with his side a goal ahead at halftime – and San Antonio’s 2-2 draw with Colorado Springs Switchbacks FC having gone final, providing the break New Mexico needed – United Head Coach Troy Lesesne called an audible.

“[I made] a rookie, first-year coach decision to tell the guys,” he said.

It didn’t matter. Putting in one of its best performances of the season, goals by Chris Wehan and Devon Sandoval got the party started for the final time on home turf this season in a 2-0 victory that potentially provided a key to any postseason success that might arrive in the next few weeks.

“I think past few games, we got in our own heads a little bit, thinking that we have to win,” said NMU forward David Estrada. “But tonight, we played with a certain kind of freedom, knowing that we are going to take care of business. The fact that we had 13,000-plus people here was incredible and was instrumental.”

Wehan’s goal just before halftime broke the tension as he capitalized on a collision between Las Vegas goalkeeper Tommy Olsen and defender Gabe Robinson as they both went for a cross by Josh Suggs from the left, allowing the former University of New Mexico standout to fire home calmly.

The insurance marker, while scored by Sandoval, came through the industry of Daniel Bruce, who provided a burst of energy late after coming on for Santi Moar. Bruce chased down possession on the left side as the game became stretched, cut inside his defender and fired a low shot that squeezed under Olsen as he tried to save, allowing Sandoval to score maybe the easiest of his 11 league goals this season from a yard away with three minutes to go.

“I got a little choked up when I saw the ball cross that line on that second goal because I knew we were in,” said Estrada. “We came here to make a difference in this community and making playoffs in the first year sets a precedent for the rest of the history of this team.”

That finish eased any stress that there could be a way for Las Vegas to spoil things late, even as New Mexico’s defense put in a solid display to post its fourth shutout of the season. As the final whistle blew, and those on the field and in the stands erupted into celebration, New Mexico became the fourth first-year club in the Championship to reach the postseason.

“They haven’t shied away from anything this entire year,” said Lesesne. “They are a phenomenal group. This group is exactly what I envisioned for our first year as a club and they have fulfilled it in every way possible. Not just because we made the playoffs, but because the identity is exactly who we want to be and that’s because of these guys.”

Now, the road awaits in the playoffs, and a visit to face No. 7 seed Sacramento Republic FC on Wednesday night at another of the Championship’s raucous venues at Papa Murphy’s Park. After the club’s success away from home this season – particularly in the do-or-die atmosphere of the Lamar Hunt U.S. Open Cup, where it played every contest away from home in reaching the tournament’s Quarterfinals earlier this year – New Mexico is hopeful of its chances.

“I’ve been really, really proud of our away record this season,” said Lesesne. “Every Open Cup match we had was on the road – five extra away matches under our belts – so that’s going to play a really big role in how we play in Sacramento, and trying to progress in the playoffs.”

Having gone into the night not knowing if there would be another game to be played this season, New Mexico and the fans that have made the club one of the biggest stories in American soccer this year looked ready for whatever may come next.

“I think that, as an expansion franchise, we have set a precedent that future teams can model themselves after,” said Lesesne. “Because of the identity, the brand and the culture that we have been able to establish in such a short amount of time. That has everything to do with the people involved.