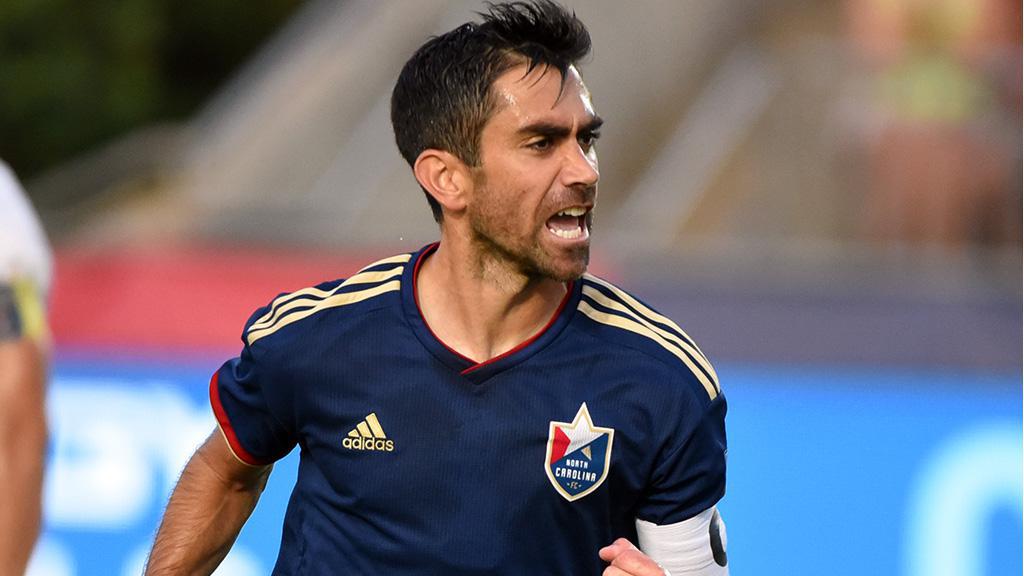 After making 181 appearances in the club's colors in his career, North Carolina FC will pay tribute to captain Austin da Luz on Saturday night as he prepares to retire this offseason. | Photo courtesy Rob Kinnan / North Carolina FC

CARY, N.C. – North Carolina FC’s final game of the 2019 regular season on Saturday night at Sahlen’s Stadium at WakeMed Soccer Park will have a special meaning for all in attendance as the club pays tribute to longstanding midfielder Austin da Luz ahead of his retirement this offseason.

The former Wake Forest standout has made 181 appearances in the club’s colors, third-most in NCFC history, and ranks second in minutes played (13,310), fourth in assists (18) and fifth in goals (23) for the club all-time.

But more than the numbers he’s accumulated for the club, da Luz’s spirit and contributions to the community have made him stand out and become arguably the most admired player in NCFC’s history. In addition to his local work in the community, the Playing for Pride initiative da Luz began in 2017 has made a national impact over the past three years. On Friday, the club announced he had been awarded its 2019 Community Service and Leadership awards.

“He just embodies what this club’s about,” said NCFC Head Coach Dave Sarachan. “You know with Austin, he really cares about this team, and so his commitment to the team, to the club, to the community, because this is my first year with Austin, I didn’t really work with him before, but I knew of him, all of those variables that I had heard about has come true.”

Ahead of the clash against Saint Louis FC (7 p.m. ET | Match Center | ESPN+), the club and its players and fans took to social media to pay tribute to a man that has come to be known as Mr. North Carolina FC.

Alright everyone, as you all know.. my dear friend and @NorthCarolinaFC legend @austindaluz is retiring after this season. Saturday night will be the last game he plays for our club in the regular season and we need you all out there to give him the recognition he deserves. In

I don’t have a favorite @austindaluz memory but I will say this- Austin is an incredible person on and off the field and deserves a packed house on Saturday night! We love you, Austin

Before getting real about how far back he goes with Austin. #ThankYoudaLuz l #NoFinishLine pic.twitter.com/B5wfusdvKC

Mine wasn’t on the field. Austin awarded me a signed jersey as part of a contest for having voted in the mid-terms. I had shared a pic of my sons who went with me. I gave the jersey to my diminutive, left-footed son who loved it! Still hangs in his room as his only decoration. pic.twitter.com/H5ilVJuPOc

I’ll start us off...my favorite @austindaluz memory is the game winning goal he scored in stoppage time away to OKC. The goal can be viewed here at the 1:20 mark: https://t.co/QCoSdpVWdq ... it was his second goal of the game btw. Austin has meant so much to @NorthCarolinaFC

Mine? Wasn't even on the field. At a Courage preseason game, over on one of the practice fields, Austin walked over and said, "Hey Mike, how you doing?" I mean, I'm just a normal fan. To me, that shows that he's more than just a team Captain, but of our whole community.

Class player and person and a thoroughbred on the field. Come on NC let’s get out and support the face of NCFC. Brilliant player whose passion, insight and IQ for the game are to be lauded. Fan favorite. Real player and a real honorable kind soul.
Kick ass Sat night &support NCFC https://t.co/48dsZbgMwE

And secondly...da Luz always knew how much the Charlotte rivalry meant to us as supporters and celebrated appropriately after putting them to bed last year. pic.twitter.com/sxdci4vNjQ

(5/11) Austin made a point of coming over and thanking the @trisoccerfan supporters in the 309 Depot. It was little touches like that make him a RailHawk/NCFC legend. pic.twitter.com/BVwqbKpQSy