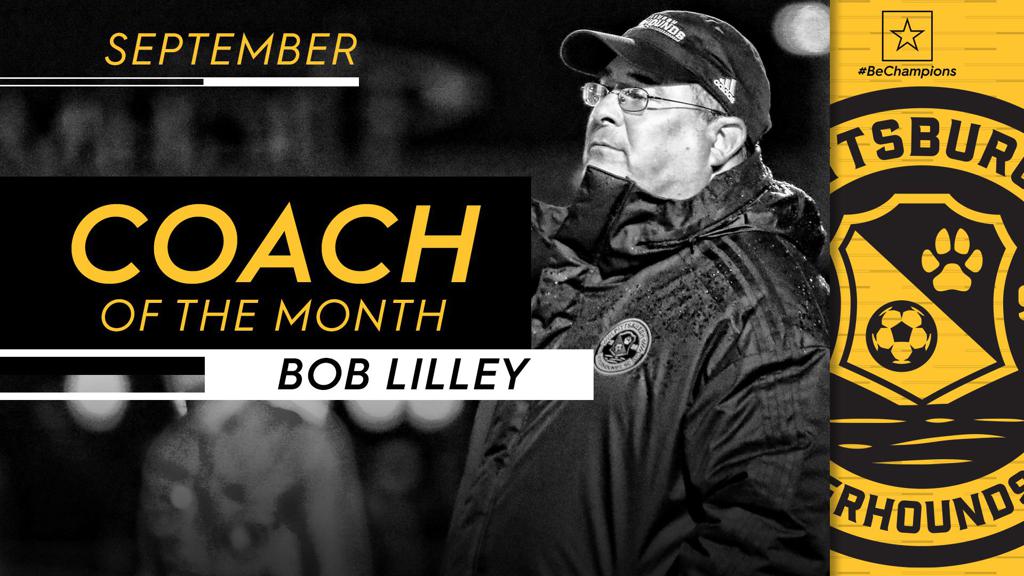 TAMPA, Fla. – Pittsburgh Riverhounds SC’s Bob Lilley has been voted the USL Championship’s Coach of the Month for September as his side clinched a playoff place during a month that saw it go undefeated and fail to concede a goal in five contests.

Now in his second season with the Hounds, Lilley has his side in position to claim the top spot in the Championship’s Eastern Conference going into the final two weeks of the regular season. Pittsburgh has tied a club record with 17 wins in the regular season and has suffered only four defeats, the fewest in the conference. Entering September off back-to-back shutouts, the side went 698 minutes without conceding until a 2-1 victory against Loudoun United FC on October 1, the second-longest shutout streak in Championship history.

“The month of September was certainly a tough test for our group,” said Lilley. “Hopefully, this momentum gained will propel us in the playoffs.”

This past Saturday, Pittsburgh completed an undefeated regular season at Highmark Stadium with the side going 10-0-7 on its home turf in the regular season. It is on a nine-game undefeated streak overall going into Saturday’s clash with Saint Louis FC. Sitting with a league-high 15 shutouts this season, the Hounds will enter the 2019 USL Championship Playoffs as one of the favorites to earn a place in the USL Championship Final in November.

Lilley received 65 percent of the vote to take the award, with Saint Louis FC’s Anthony Pulis taking second place on 23 percent after his side recorded a league-high five victories in seven outings during September.