The 18 – Louisville Finding its Fall Form 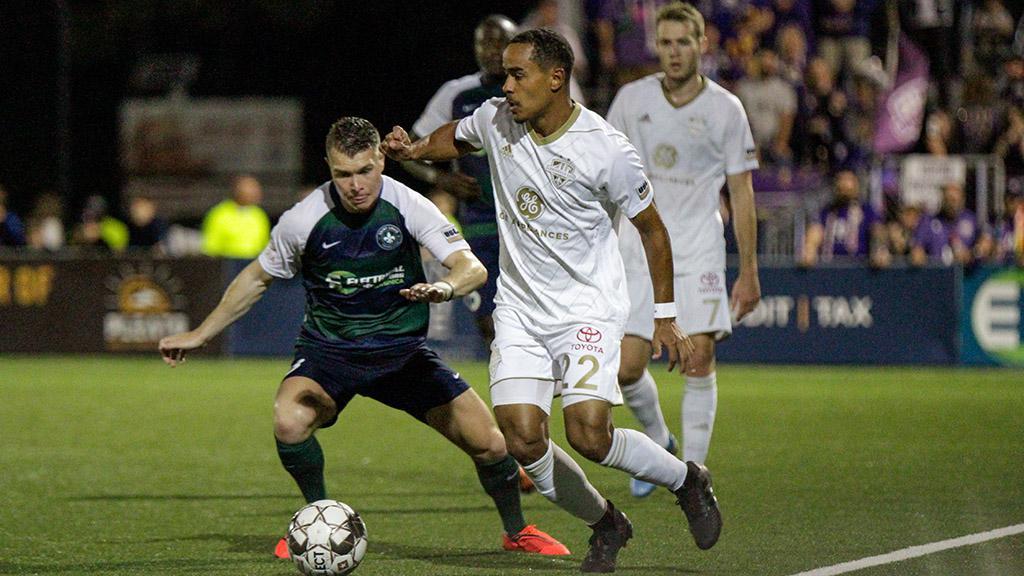 FENTON, Mo. – You can usually tell when the business end of the USL Championship season is about to arrive.

That’s when Louisville City FC starts rounding into the sort of form that has carried it to four consecutive Eastern Conference Final appearances and back-to-back victories in the USL Championship Final.

After a rare misstep the previous weekend against the Tampa Bay Rowdies – where the side conceded twice late against the 10-man visitors to leave two points on the table – it was back to business as usual on Saturday. A 1-0 win against Saint Louis FC to claim the Kings’ Cup on the road at West Community Stadium extended LouCity’s current undefeated run to 10 games while looking like the sort of side opponents will not relish facing this postseason.

“Every part of what we prepared for happened on the field tonight,” said Head Coach John Hackworth on the playoff-type atmosphere, “but our guys had a wonderful mentality in terms of how we prepared this week and how we went out there and executed tonight.”

While its current undefeated streak is impressive, the way LouCity has been able to turn things on when the end of the season nears is even more so. Cumulatively, the side has put together a record of 38-6-15 over the regular season and playoffs after the calendar has turned to August 1 since the 2016 season, including a run last year that saw it record 10 consecutive victories that ran from the end of the regular season and to the club’s win against Phoenix Rising FC to lift its second title.

Another big test arrives on Tuesday night when LouCity visits Nashville SC in one of Week 32’s must-see contests, but the defending champion is looking more than ready to defend its crown again.

1. One of the things that stood out most in Louisville’s victory was the manner in which the side grabbed the game early – resulting in Magnus Rasmussen’s goal that decided the contest in the 12th minute – and then didn’t allow much of a way back into the game for its hosts thereafter. Louisville’s 658 passes attempted were the third-most in a game by a visiting side this season, and in contrast to the two teams that managed more – New Mexico United in a 5-1 loss on the road to Las Vegas Lights FC and Indy Eleven in a 3-0 loss to Pittsburgh Riverhounds SC – Louisville came away with an impressive win.

3. Certainly, STLFC Head Coach Anthony Pulis – while saying he thought his side gave LouCity maybe a bit too much respect as it established its rhythm – had nothing but praise for the visitors. “Give Louisville [City FC] credit, they played some fantastic football and they showed why they are back-to-back champions,” said Pulis. “I think tonight is a good lesson for us regarding our mindset and mentality going into games, but ultimately give credit to them. I’m amazed they are not higher in the league because at times I think they were the best team we’ve seen this year.”

4. Aside from Rasmussen’s goal, the biggest moment of the game came from LouCity goalkeeper Chris Hubbard, who produced a superlative save to keep out Tyler Blackwood on STLFC’s best chance of the game with 15 minutes to go. That moment was a continuation of Hubbard’s positive form over the course of Lousville’s 10-game undefeated streak, where he’s posted five shutouts, a save percentage of 75.76 and a goals-against average of 0.8.

5. Only two goalkeepers have put up better numbers since August 1. The first being Pittsburgh Riverhounds SC’s Kyle Morton with his seven clean sheets earning a 0.73 goals-against average over his 11 games. The other is the goalkeeper that Louisville will likely face on Tuesday night, with Matt Pickens having conceded only four goals in his last 10 appearances with a save percentage of 84 percent. That’s the reason why the veteran is now in control of the Championship’s Golden Glove race after overtaking Tampa Bay’s John McCarthy and Phoenix’s Zac Lubin over the past month.

6. If there was a clear indicator of how important homefield advantage might end up being in the Eastern Conference Playoffs, you have to only look at Indy Eleven’s victory on Saturday night against Memphis 901 FC as it returned to Lucas Oil Stadium after a four-game road trip that had seen the side lose all four contests and get outscored 7-1. There was a clear bounce in the Eleven’s step from being back in front of its home fans, and the hosts had taken the lead before 901 FC – which has improved in the second half of the season – managed its first official shot.

7. The only concern coming out of the contest for the Eleven would have been the continued poor form of Dane Kelly, who while recording an assist on Cristian Novoa’s opening goal only managed to put one of his four shots for the game on target. After the struggles Kelly went through in the Eleven’s defeat at Pittsburgh, there seem to be some surprising confidence issues coming up for a player who has scored 79 goals across the Championship’s regular season and playoffs.

8. The Jamaican is now scoreless in his last five appearances, and while it’s not the somewhat incredible run that saw him fail to find the mark in 13 consecutive appearances earlier this year, it’s certainly not a great sign for Indy’s attack. Head Coach Martin Rennie played up the positive aspects of Kelly’s performance after the game, but there still must be concern that he has missed three times as many Big Chances according to Opta (23) as he has goals (7).

9. While Indy took care of business at home on Saturday night, the Tampa Bay Rowdies were unable to do so on the road on Friday as they fell to Loudoun United FC in a 2-0 loss that saw the visitors hold much more possession but fail to find the incisiveness in the final third that has brought them far greater road success this year than in previous seasons. Instead, the Rowdies never seemed to get a handle on Loudoun’s Gordon Wild, who put in a great shift with five of the host’s 16 shots – the last of which supplied the insurance goal late on – and three key passes.

10. Those results – which leave Indy in second place to start the week and Tampa Bay in fifth – simply magnify this Saturday’s contest between the two clubs at Al Lang Stadium. If Indy can’t figure out its road form and allows the Rowdies to take victory – thereby jumping the Eleven in the standings with one game to go – the pressure to avoid sitting in the No. 5 spot after the final game of the regular season is going to be something else.

11. If it could have put together a marginally better road record, Las Vegas Lights FC would be above the playoff line right now in the Western Conference. As it is, Head Coach Eric Wynalda’s side still has a shot after a third win in the last four games on Saturday night that handed a blow to San Antonio FC’s hopes of the postseason and also took advantage of New Mexico United’s home draw against Rio Grande Valley FC and the Portland Timbers 2’s loss to Phoenix Rising FC.

12. Given the stakes and the need for victory on both sides, the game was an open one as the teams combined for the second-most shots on goal of the weekend (14) and the fourth-most shots overall (33), split relatively evenly down the middle. The difference on the night was Las Vegas’ Irvin Parra, whose two goals moved him to 15 for the regular season and backed up his pregame words to Wynalda.

13. “I asked him ‘what do you have for me tonight?’ and he said ‘they're not going to be able to contain me. They can't handle me. Nobody can,’ and look, you can say whatever you like about Irvin Parra, that guy delivers,” said Wynalda. “He stayed healthy, he is a leader on this team, he's had his ups and downs but for the most part, he's such a vital part of this team. If we win, we win as he goes. When he's on, we are unstoppable.”

14. As big as Saturday night’s victory was – making it nine home wins for Lights FC this season – it set up the biggest game in Las Vegas’ short history this weekend as Silver State Cup rival Reno 1868 FC comes to visit Cashman Field. If Parra and co. can find a way to take victory there, it could set up a playoffs-or-bust matchup on the road against New Mexico United on the final Saturday of the season. I don’t know about you, but that might be kind of fun.

15. One team that almost certainly won’t be in the playoffs at this point is OKC Energy FC, which regrettably achieved something that hasn’t happened in a USL Championship contest since at least the start of the 2017 and likely before. In its 2-0 loss to Orange County SC on Saturday night, OKC failed to register an official shot, setting an unbreakable record it will want to forget very quickly.

16. Orange County, on the other hand, shook off its road defeat to Rio Grande Valley FC the previous week and got right back to business with 19 total shots, 11 of which came from inside the penalty area, and second-half goals by Harry Forrester and Joe Amico that ensured the game was comfortably put to bed.

17. “Last week didn’t have that sharpness, that killer instinct that we had the last six games,” said Orange County Head Coach Braeden Cloutier. “Tonight, we came out and had another great team performance from top to bottom. Perhaps we could have scored some more goals, but I’ll take the two goals and the clean sheet and move on to the next.”

18. The next for Orange County is the defining week of its season as it visits Real Monarchs SLC on Wednesday night and Sacramento Republic FC on Saturday for its final two road games of the campaign before returning home to host Fresno FC. With a playoff place in hand for the fourth time in the past five seasons, OCSC has everything in front of it as it battles to host a postseason contest. How it comes through the final three games of the season could give a clue as to whether it will be ready to challenge for a return to the Western Conference Final for a second consecutive year.