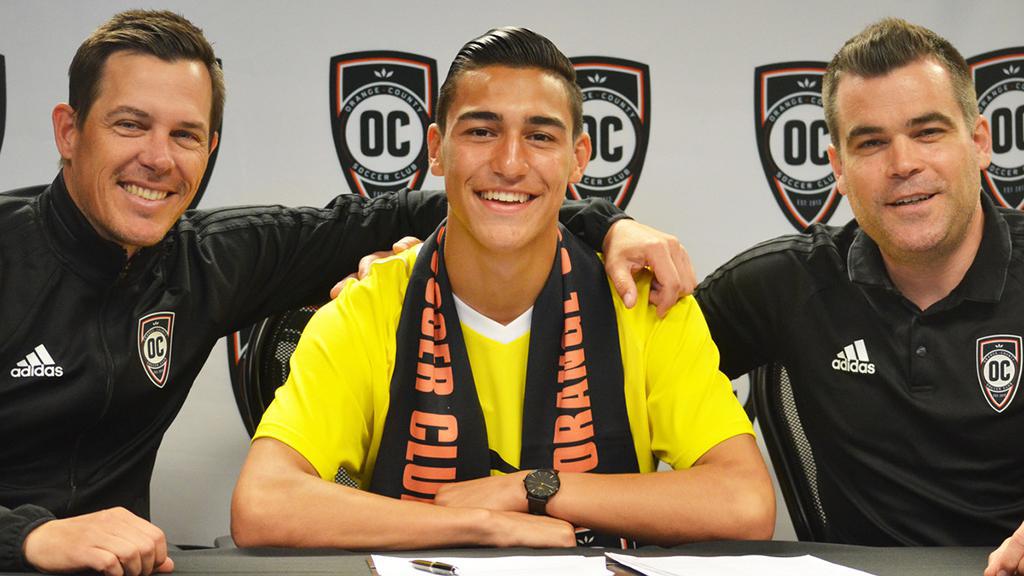 Orange County SC's signing of goalkeeper Aaron Cervantes in 2018 began the club's emphasis on fostering young talent, but the club is also determined to be a title-contending side in the Championship as well. | Photo courtesy Orange County SC

IRVINE, Calif. – There isn’t another team in the USL Championship with a roster make-up quite like Orange County SC.

At one end of the spectrum there are 33-year-olds in defender Michael Orozco – he of more than 325 professional appearances, including more than 250 in Liga MX, and a former U.S. Men’s National Team player – and Japanese midfielder Koji Hashimoto.

At the other, there are players like goalkeeper Aaron Cervantes and midfielders Bryang Kayo and Diego Lopez, all of whom have played this cycle for the United States U-17 National Team, and 14-year-old Francis Jacobs, who earlier this year became the youngest professional signing in North American soccer history.

And, according to OCSC Head Coach Braeden Cloutier, that’s absolutely by design as the club looks to not only compete for titles each year in the Championship, but also looks to offer opportunities to top young players as a place where they can build their futures in the professional ranks.

“It’s finding that balance of having senior players, players who have played at a high level to try and get the best of both worlds,” said Cloutier recently. “We’re striving to be in the top four right now, we want to finish as high up in the table as possible, we want to win a championship, that’s what it’s all about, but along the way we want to develop players and move players on to the next level.” 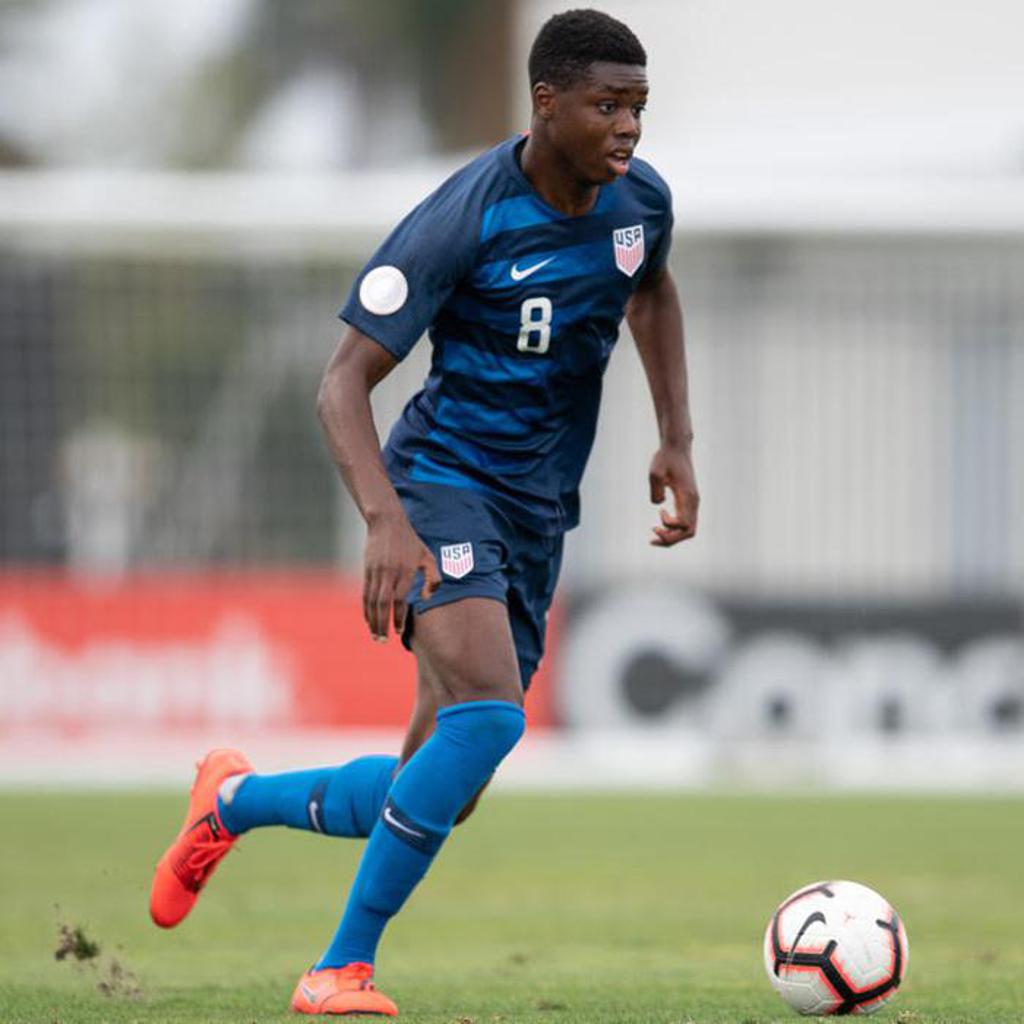 If Cervantes’ signing as a 15-year-old in the weeks leading up to the 2018 Championship season was the first major sign, the club’s more recent moves in bringing aboard Kayo and Lopez – both of whom had played previously this season in the Championship with Loudoun United FC and ATL UTD 2 – was a sign that something bigger was starting to happen at Championship Soccer Stadium.

But the club doesn’t simply want to play young players for the sake of playing them, with the understanding that first and foremost putting the side in contention to win consistently is going to be crucial to the team’s ability to draw fans and to attract more experienced talent. Orozco’s arrival added another player with extensive experience to the club’s squad, where last season the likes of Kevin Alston, Aodhan Quinn and Michael Seaton all played key roles in leading OCSC to the top of the Western Conference for the second time in its history.

Having those players in the fold is important for the club’s on-field success, but also to help provide the right environment day-in and day-out that will allow Kayo, Lopez, Jacobs and Cervantes reach the high levels that their potential could command. That’s particularly true for Cervantes, who as a goalkeeper is under arguably the most pressure of any on the field over 90 minutes.

“I think for Aaron this season if he’s playing on a team that concedes a lot of goals and doesn’t get results and are playing with a lot of youth, it can be detrimental at times,” said Cloutier. “For us, the balance of having Michael Orozco in front of him, Kevin Alston, two guys that played at an extremely high level to help mentor him and help him get through some of these tough situations, that helps him more in the long run for his development.”

Cervantes – named the No. 9 player in the 2019 USL 20 Under 20 – has come a very long way since making his debut at the start of the season, and it’s seen him potentially earn a place in the United States squad for the FIFA U-17 World Cup later this month in Brazil. His progression, and that of Jacobs, has been fostered by the competition they experience as professionals competing against seasoned pros in training and on the field in the Championship, where the level of competition has certainly never been higher.

While Jacobs is unlikely to see his first official action for Orange County this season – as was the case with Cervantes in 2018 – the progress he’s made since joining First Team training has been noticeable to those outside the club.

“We have Francis, and he’s grown in leaps and bounds in just the couple of months we’ve had him, and he holds his own at practice,” said Cloutier. “He’s a 14-year-old kid and he holds his own with men that have played at a high level. He went back the other night and trained with the national pool and he looked really mature and looked better than he did before, and the coach is coming up to us and said he’s improved a lot in just a short space of time.”

Models similar to Orange County’s can be seen elsewhere in the Championship. San Antonio FC, notably, has brought players up from its outstanding youth academy into the First Team, including 15-year-old Leo Torres, who signed professionally with the club prior to the start of this season. The move of Ethan Bryant to Belgian club KSV Roeselare in August was a sign of the club’s success in providing a path to the next level, as well as ensuring the club remains in the running for postseason action every year.

With the arrival of the USL Academy Cup this month, and the USL Academy League next year, as a means to foster the top young players in the Championship, League One and League Two, it’s likely that more clubs in the future will be looking to follow Orange County’s lead, opening up more avenues for talented teenagers to not only be spotted across the United States but then provided a pathway to the top of the game.

And while Cloutier is wary about comparing what OCSC is looking to accomplish to some of the best-known clubs that follow the model his club is looking to replicate, it’s a sign of the hopes the club has that it can be known as a highly competitive club on the field, and a place where big overseas clubs can find outstanding young players.

“If you look at the mold of – I don’t want to say Ajax, because Ajax, that’s at that level – but Ajax is striving to win championships, striving to win the Champions League, but at the same time they’re developing players and they’re moving players on to bigger clubs,” said Cloutier. “It’s a business, and ultimately that’s our goal. We want to win championships, we want to develop players, we want to move players onto the next level.”