MURRAY: Déjà Vu, then Something New for Hounds’ Forbes 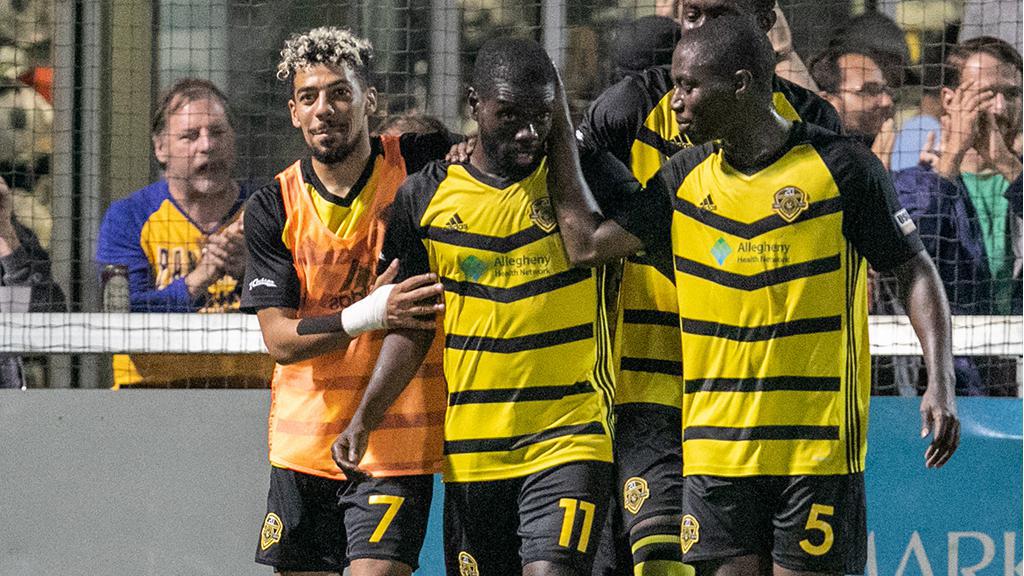 PITTSBURGH – As a Pittsburgh Riverhounds SC fan, you could have been forgiven for feeling a sense of déjà vu as Kenardo Forbes took aim, just a little bit left of center of the goal in front of the Steel Army, on Saturday night.

And but for the difference in the corner the Jamaican picked out, going top-left this time instead of top-right, it certainly looked almost identical to the screaming finish he scored just over a year ago against in-state rival Bethlehem Steel FC.

“I mean, that's my spot,” said Forbes after the Hounds had installed themselves as favorites to top the Eastern Conference at the end of the regular season with a 3-0 win against Indy Eleven on Saturday night. “Remember that one last season? That's my spot, so I always try to leave a bit of room to my right before I shoot.”

If Forbes’ opening goal looked familiar, what happened next was something no-one in the USL Championship had seen before.

Taking a lofted pass into the left channel with 19 minutes to go from fellow Jamaican Neco Brett, Forbes feinted to go right before sweeping the ball onto his left foot, creating the space he needed at a tight angle to thread the needle between his marker and Indy goalkeeper Evan Newton for a low shot that picked out the bottom-right corner and gave Forbes his first two-goal game in the league.

“It was a big game and I feel like I need to step up, it was my turn to step up,” said Forbes. “Luckily, I scored my first brace in the USL, five years.”

“That goal, that's one of his favorite high school moves,” added Brett. “He's been doing it since high school. So, in the moment he pulls it off – like 99 percent of the time, he's gonna pull off that trick, you know what I mean? – and he did it really well, he got a brilliant goal.”

As you might have gathered, with 17 goals in 156 appearances in the Championship, scoring hasn’t really been central to Forbes’ game since he arrived in the league.

But when it comes to setting the tempo for a title contender, he’s been right at the top.

Since the start of the 2017 season, no-one has attempted more passes (5,009) or completed more passes (4,139) than Forbes. And, as a deeper-lying midfielder than some of his counterparts, he still ranks second in Big Chances Created (34) and is tied for fourth in assists (21).

That’s the sort of influence on a game that will earn the respect of the rest of the league, and with two Championship All-League selections in the past three seasons, the diligent work Forbes has done both for the Hounds and at his previous stop with the Rochester Rhinos has made him one of the most complete midfielders in the league.

Forbes’ work rate and ability to control a game has been reflected throughout the seven-game shutout streak Pittsburgh carries into Tuesday night’s clash on the road against Loudoun United FC. Currently the third-longest streak in the Championship’s history despite some nervous defensive moments against Indy, the Hounds would move into second and be just 23 minutes short of Rio Grande Valley FC’s record of 759 minutes set in the 2016 season if they can contain Loudoun’s attack and reach an eighth consecutive clean sheet.

And if the Hounds can match their display against the Eleven and put up its fourth win in its last five outings at Segra Field, it might be difficult to stop from claiming homefield advantage throughout the Eastern Conference Playoffs.

“It was nice to get a victory plus a clean sheet,” said Forbes. “Indy is a really good team so for us to get a 3-0 win and a clean sheet, moving in the right direction.”