The 18 – Phoenix Rises from the Ashes, Again

In a week packed with comebacks, Phoenix showed its strongest trait 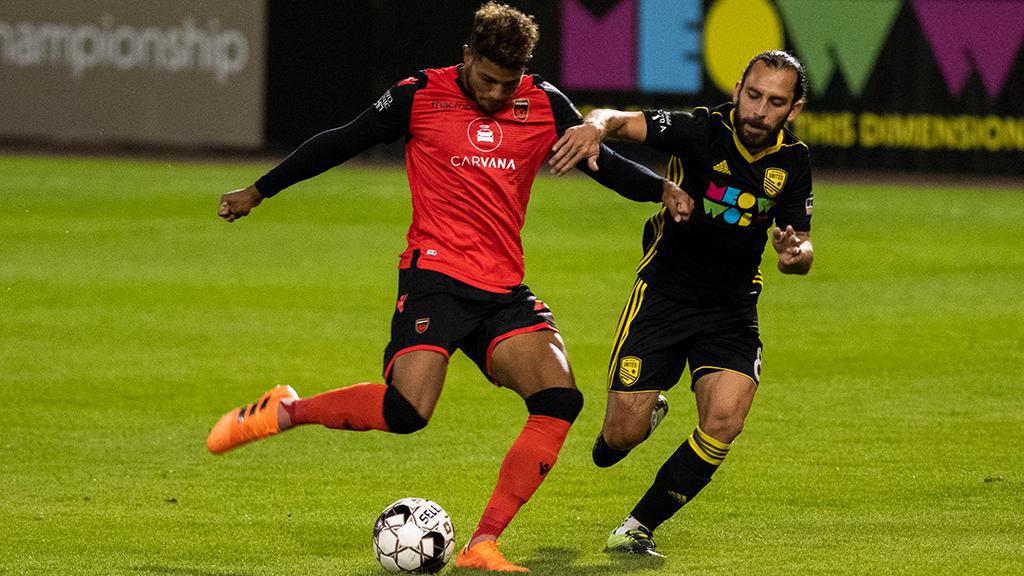 The fact that even when it’s been down, you’ve never truly been able to count out Phoenix Rising FC has been the hallmark of its remarkable season.

Even in the defeat to Fresno FC that broke the club’s record-setting 20-game winning streak the week prior, the side earned the chance to take something from the game, only for once to not take advantage.

So, when New Mexico United’s Justin Schmidt put the hosts two goals ahead eight minutes into the second half of Saturday’s clash between the Four Corners Cup rivals at Isotopes Park, the question was when Phoenix’s response would arrive, and would United be able to withstand it?

The answer came through two remarkable goals by Rising FC’s Joey Calistri inside the final 20 minutes, which led to a 2-2 draw in front of a crowd of 13,009 between two sides that it’s now been impossible to separate on three separate occasions this season.

The first of Calistri’s finishes, 12 minutes after his introduction for Jose Aguinaga in the 62nd minute, was remarkable enough, flying home from looked like an impossible angle close to the goal line from the right side of the penalty area. But then came the 90th-minute equalizer, which had to be seen to be believed.

Every season has its best sequence, from @reggae_j11 ‘s Ninja Warrior to @cwoz1 ‘s bomb to Luke Rooney (extra credit if u saw that live). This one is my early call for 2019. pic.twitter.com/1ScuGs8RUd

If anyone needed a reminder of how difficult it’s going to be to end Rising FC’s pursuit of victory in the USL Championship Final and add to the regular season title it clinched on Saturday night, this game did so.

1.  If there was a silver lining for New Mexico, it’s that it once again showed itself to be one of the few sides that appears to match up well with Phoenix. Sitting alongside Fresno as the only two sides that Rising FC hasn’t been able to defeat this year – the prior two meetings ending in a 3-3 draw in Phoenix’s home opener back in March and NMU’s memorable penalty shootout victory in the Lamar Hunt U.S. Open Cup – the hosts were left to rue some chances that could have seen it add to its lead before Phoenix’s comeback.

2. New Mexico officially only had one shot miss the target, with every other effort aside from its two goals being saved by Phoenix goalkeeper Zac Lubin or blocked. Chances for Saalih Muhammed and Chris Wehan could have made it a three-goal game before Calistri’s first for the visitors, but any neutral is going to be hoping we get a fourth round of this matchup in the playoffs given the drama it has already provided this season.

3. Phoenix has become known for its ability to rally this season – its 19 points gained from losing positions are equal to the total posted a year ago by FC Cincinnati – but comebacks were the theme of the week in the Championship. Eleven teams rallied to take points after trailing over the 21-game slate starting last Tuesday night, including six that earned victory. By way of comparison, there had been 13 instances of teams rallying to earn points between September 1-23, with seven of those resulting in wins.

4. The two biggest victories on Saturday night to come by way of comeback were both in the Western Conference, where Real Monarchs SLC and El Paso Locomotive FC pulled off road victories that provided two more twists to the race for positioning throughout the conference’s playoff positions.

5. The Monarchs’ road struggles had come to the fore in their defeat against Rio Grande Valley FC the previous week, and even though they held the early advantage in shots and chances created against Reno 1868 FC at Greater Nevada Field when the hosts took the lead on Danny Musovski’s eighth goal of September just before the half-hour mark it could have left an awfully familiar feeling for the visitors, which had won only three times in 15 prior away games this season.

6. Instead, it only provided the start to a thrilling contest in the driving northern Nevada rain. Real’s Noah Powder got things back on level terms with a wonderful individual effort that saw him weave past three defenders before finishing late in the first half and then both sides hit the woodwork after the break. The Monarchs’ close encounter – which saw Reno goalkeeper JT Marcinkowski turn Maikel Chang’s shot onto the right upright before recovering to make a crucial second save on Luis Arriaga – set up the game’s decisive moment, though, as from the ensuing corner kick the ball came all the way through to Erik Holt at the back post. The center back threaded the needle with his finish from just outside the right side of the six-yard area that tucked just inside the left post to earn Real a crucial victory.

7. Holt’s goal proved even more important a few hours later when Locomotive FC’s 2-1 comeback victory against Sacramento Republic FC left the Monarchs theoretically in control of the race for fourth place with four games to go in the regular season. The stoppage-time winner by Josue Gomez – as fortuitous as it was after Republic FC goalkeeper Bobby Shuttleworth had to scramble to keep out an awkward deflection that was set to loop into the net off defender Matt Mahoney, only for his clawed clearance to land straight at the feet of the El Paso substitute to finish – provided a weird ending to a game that was twice delayed, once by a flash hailstorm, but that is going to likely prove key to Locomotive FC earning a playoff berth next month.

8. The combination of the Monarchs’ victory, Sacramento’s loss and a defeat for Orange County SC against Rio Grande Valley FC that saw the Toros’ good home mojo continue – OCSC hit the woodwork three times over the game, but ended up falling 2-0 as RGVFC took its eighth home win of the season – and Austin Bold FC’s comeback victory on Sunday afternoon against the Portland Timbers 2 left what now looks like four teams battling for fourth place within two points of each other as we go into the final three weeks of the regular season.

9. If that seems like a narrow margin to decide the final team that at best will get to host a single playoff game this postseason, then the top of the Eastern Conference has given us an even tighter race after this past week’s action. And, again, a comeback had something to do with the set-up that sees five teams vying for the top seed in the postseason separated by just two points.

10. And of all the comebacks we saw on Saturday night, that of the Tampa Bay Rowdies on the road against Louisville City FC might have been the most unlikely. Trailing by a pair of goals and down a man after Jordan Doherty was sent off for his second caution of the game, it looked as though the Rowdies were going to be the odd team out in the top five at the end of the night.

11. But then, as he has regularly during the second half of the season, Malik Johnson became a difference-maker as he was brought down inside the penalty area to earn the visitors a chance to pull a goal back from the spot. (Johnson has completed 55 of 84 dribbles since August 1, 12 more than second-place Marcus Epps over that span, and been a menace to anyone trying to defend him one-on-one). Sebastian Guenzatti duly obliged with three minutes to go, but then two minutes later it got that much better for the visitors. Shawn Barry’s cross from the right was met at the near post by Lucky Mkosana – who had been sent to the Rowdies earlier this season by LouCity in a trade for Antoine Hoppenot – and the Zimbabwean forward headed home into the top-right corner to grab a point.

12. Given the Rowdies’ road history, the result was another sign that the club has turned a corner this season when it comes to getting results away from Al Lang Stadium. Tampa Bay is now 8-4-3 on the road this season, which is one more win than it recorded away from home over the past two regular seasons combined.

13. On the other hand, it was a devastating blow for Louisville’s chances at finishing in the top four. The defending champion might have clinched a playoff place with Saturday’s result, but after pregame talk of feeling overlooked during its now nine-game undefeated streak (6-0-3) this is going to likely lead to a far harder road to claim a third consecutive title. LouCity has lost its previous two road games in the postseason, now it looks like it’s going to have to accomplish that multiple times with a six-point gap to the fourth-place Rowdies with four games to go.

14. With the return leg of the Kings’ Cup next against Saint Louis FC, LouCity’s going to need to pick itself up quickly. “We have to learn from these mistakes,” said LouCity Head Coach John Hackworth. “I always think you learn more from the hard mistakes than the easy ones so this one is going to hurt for a couple of days, we just need to accept responsibility for it. Saint Louis is a team that is definitely on the opposite spectrum right now and they are going to come with everything they have. Being on the road, difficult surface, it’ll be a challenge.”

15. The other late dramatics in the Eastern Conference came from the Charleston Battery, whose stoppage-time goal from AJ Paterson earned a 1-1 draw against the New York Red Bulls II on Friday night that kept things moving in the battle for the final playoff place. The ball is now in the court of Birmingham Legion FC, which visits the Swope Park Rangers on Monday night with a chance to take a three-point advantage for the 10th and final playoff place in the East ahead of their showdown with the Battery next Saturday night.

16. One team to keep an eye on in the Western Conference: The LA Galaxy II. Los Dos’ playoff chances are in fine shape after coming back from an early deficit to thump an OKC Energy FC side that looked out of gas and probably out of luck when it comes to this year’s postseason 5-1 on Saturday night. Los Dos is now 6-3-2 since the change on the sidelines that saw Junior Gonzalez replace Mike Munoz on July 19, and are 3-1-1 on the road in that span, and could be a side teams might want to avoid if they reach the playoffs.

17. It’s arguable, but there probably wasn’t a team in need of a win more this weekend than North Carolina FC. To pull it off in the way it did, coming back from a flat first half to put up a 3-1 victory against an Ottawa Fury FC side that would have overtaken it with a win of its own should give NCFC a nice confidence boost after losing four of its previous five games. Now it’s only a point from clinching a playoff place and looking solid to host a play-in round game.

18. There are three teams that are carrying undefeated streaks of at least five games right now. The first two are obvious – Pittsburgh Riverhounds SC is pushing for first place and Louisville’s clinched its playoff place now. The other? That’s ATL UTD 2, which is 3-0-2 in its last five games after it came back to earn a point against Saint Louis FC on Saturday. Atlanta has games against the Hounds and Nashville SC still to come in its final three contests of the season. Both of those two will need to make sure they don’t suffer the same fate as fellow first-place challengers Tampa Bay and Indy and drop points to Head Coach Stephen Glass’ side.