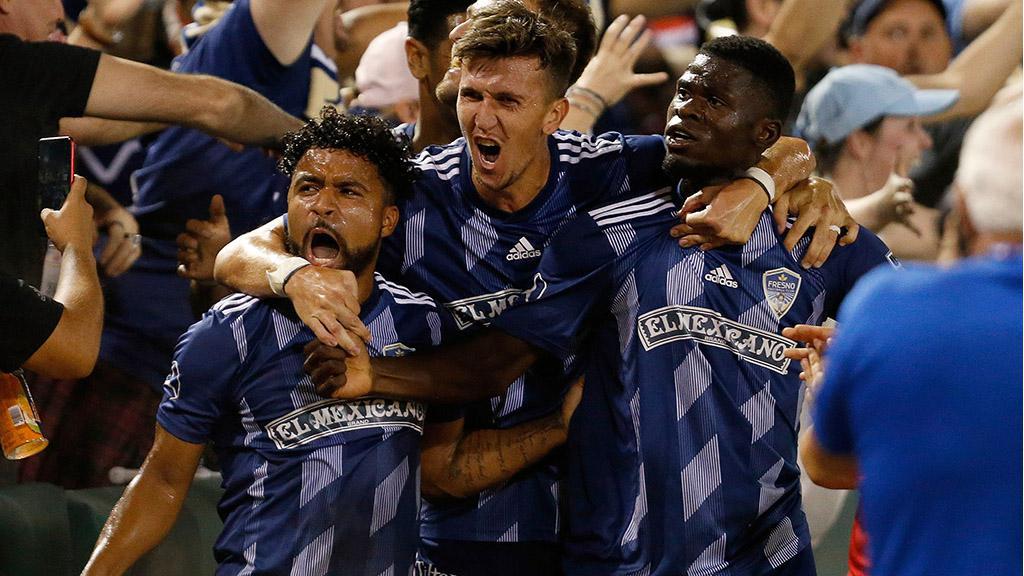 After all of the dramatic moments Phoenix Rising FC had brought us over its incredible 20-game winning streak, it would have been somehow strange if the drama of Saturday night at Chukchansi Park – which saw Fresno FC earn a 2-1 victory and bring Rising FC’s run to an end – hadn’t happened.

Instead, a game that looked to play out as a defensive battle – neither side had recorded an official shot on goal until Qudus Lawal opened the scoring eight minutes after coming on as a substitute – exploded into life in the final 20 minutes and gave us all the drama we had hoped for prior to kickoff.

The drama of penalty kicks for each side – and Phoenix’s Solomon Asante being denied first by C.J. Cochran and then by the right post – only added to the grandstand finish to the game, and there should be some sympathy for Asante, whose brilliance this season didn’t deserve such a cruel ending here.

But Fresno set out to accomplish what no side had since Orange County SC on May 4 and earn victory against the Western Conference leaders, which rightly led to major celebrations in the stands and in the locker room.

Phoenix will rebound from this loss – this week could see it clinch the regular season title if it takes victory on the road against New Mexico United and Indy Eleven drops points in either of its two outings – and there’s plenty to play for with the side needing to go a minimum of 2-1-1 down the stretch to set a record for points in a regular season.

But should the next meeting between these two clubs arrive in the first weekend of November at Casino Arizona Field, we can only hope to be this entertained at the conclusion.

1. There was a distinct before-and-after the Lawal goal in the contest, marked most clearly by the activity of Asante, who was unable to put the influence on the game he normally does thanks to the Foxes’ tremendous organization in their own half. Asante had only one key pass, no shots and 24 touches in Fresno’s half in the first three-quarters of the contest, a sign of the job Fresno did to limit his influence for most of the game.

2. That changed dramatically after Lawal’s goal arrived, with Asante racking up five shots overall including the penalty kicks and two key passes as he became far more active in the attacking third. This looked to be in part because Fresno’s excitement in taking the lead led their structure to start to break down which meant far more space in the center of midfield for Phoenix to operate. It almost cost them late and should be a focus for the Foxes this week to keep the structure that served them so well for the opening 70 minutes.

3. It didn’t have nearly the stakes that Saturday’s game did, but Fresno Head Coach Adam Smith pointed to his club’s 5-0 midweek win against Rio Grande Valley FC as an important factor in the side executing against Phoenix. “That gave the guys confidence going into today,” Smith told the Fresno Bee. “It took pressure off the guys. The pressure is on them and not us. They’re the team that won 20 in a row and we were the underdogs tonight. I know we were the home team, but still feel we’re the underdogs. To go and beat them is phenomenal, but we have to dust ourselves down and refocus and we have a tough couple road trip games coming up where we have to try to pick up points to try to secure that second spot.”

4. If the moment an animal is at its most dangerous is when it’s wounded, then New Mexico United is going to have to be on high alert when Phoenix comes to visit this weekend. Rising FC certainly seems to have the mentality that is going to produce a performance that responds to its first league loss in four-and-a-half months, which could lead to a high-speed opening at Isotopes Park next Saturday night.

5. That could be just fine for New Mexico, which used its own up-tempo start to take an early lead against Reno 1868 FC on Friday night. Unfortunately for the hosts – who welcomed another five-figure crowd to Isotopes Park – that start subsided to a defeat that while not that costly in the bigger picture of the playoff race again highlighted the defensive struggles the side has gone through this year.

6. NMU has now conceded 51 goals this season at an average of 1.76 per game. With a game in the play-in round now looking likely, there’s going to have to be work done this week to make sure the sort of structure that succeeded for Fresno is in place if United is going to thwart Phoenix’s potent attack.

7. The ball is still in New Mexico’s court when it comes to holding an edge in the race for the playoffs, with San Antonio’s draw against the LA Galaxy II one of the results that ended up a positive for the side. It’s getting close, though, something Head Coach Troy Lesesne is very aware of. “The margin of error right now is so small,” he said after Friday’s contest. “That’s where we are in the season right now. As you come into September and October and you’re trying to make a playoff run, you need to be on the positive side of that margin of error.”

8. If the margin for error is small for New Mexico – sitting in eighth place and two points ahead of the sides sitting below the playoff line – think about how tight it is in the Eastern Conference for Birmingham Legion FC and the Charleston Battery.

9. The back-and-forth nature of what looks now to be a duel for the final playoff place was in full effect this weekend. Legion FC got first shot and pulled off a 1-0 victory against second-place Indy Eleven thanks to Brian Wright’s goal late in the first half that opened up a four-point gap to the 11th-place Battery. “With the games we have now we control our own fate,” said Wright. “We’re happy with how we played today. Sometimes it has to be ugly, but we gutted it out and we were able to get three huge points at home.”

10. You could certainly imagine there were some Battery fans tuned into that contest, and then some Legion FC fans on Sunday afternoon when the roles were flipped as the Battery played host to North Carolina FC at MUSC Health Stadium. Things were looking good for Birmingham when Nazmi Albadawi struck for NCFC early in the second half to level the contest, but a stoppage-time winner by Nico Rittmeyer that earned Charleston a 2-1 win lifted his side and left Legion FC aware this was going to be a fight to the finish.

11. “We really needed this one,” said Rittmeyer. “Obviously, we're at the point in the season where we have to win every match if we want to make it into the playoffs. We at least have to win all of our home matches and we did a good job starting that tonight.”

12. Both teams will be back in action over the next seven days with Charleston visiting the New York Red Bulls II on Friday night before Birmingham visits the Swope Park Rangers next Monday, but then comes a potential decision day when Legion FC plays host to the Battery at BBVA Field on October 5. It will be unquestionably one of the biggest games of this regular season and will be fascinating to see which side can hold its nerve under the pressure of the playoff race.

13. That October 5 meeting between Birmingham and Charleston means that while Pittsburgh Riverhounds SC doesn’t officially have the playoff x- next to its name in the standings, the Hounds are going to be in the postseason regardless of what happens over their final six games of the season. Where the intrigue now lies for the Hounds is how high a seed can they earn after a 0-0 draw on the road against Nashville SC on Saturday night kept them in contention for first place at the end of the season.

14. Pittsburgh had to work to contain Nashville, especially after Tobi Adewole was sent off five minutes before halftime to leave the side shorthanded for the second half. The Hounds have redoubled their defensive commitment of late, though, and while former player Lebo Moloto had some brilliant flashes – as did Alan Winn after coming on as a substitute – Pittsburgh goalkeeper Kyle Morton came up with the saves when he needed to and the Hounds defense closed down space in the final third exceptionally to earn a fifth consecutive shutout.

15. That number should be a warning to the rest of the playoff contenders in the East, as shaky as the Hounds have looked at times this season. If they’re coming into defensive form and get the chance to host two playoff games at Highmark Stadium, they’re going to be a hard out when the playoffs come around.

16. Another side looking like a hard out right now? Defending champion Louisville City FC, which came out on top of another of its wild contests against the New York Red Bulls II on Saturday night with a 5-3 win that shifted Head Coach John Hackworth’s side into sixth place. After Louisville’s 6-4 win on the road a season ago in the regular season, and its 5-1 win in the Eastern Conference Final last November, you can add this to the list of outrageously entertaining contests these sides have produced.

17. With North Carolina’s fading form, LouCity should be confident it will stay in the top six the rest of the way, but as with Pittsburgh, there’s a chance for bigger things ahead of the postseason’s arrival. With the Tampa Bay Rowdies coming to town this Saturday off the back of their own rollicking 6-1 win against Bethlehem Steel FC, Louisville could close the gap to the top four to three points with four games to go if it can secure a win.

18. That certainly wouldn’t be a surprise, either, especially given the fact that this time of year seems to bring out the best historically in LouCity. As noticed by USL on ESPN Play by Play voice Mike Watts, when the calendar turns to August, Louisville has typically clicked into gear. The club’s 10-game winning streak last year that carried through the end of the regular season and on to victory in the USL Championship Final was emblematic of it, but since the 2016 season Louisville has gone 28-6-12 from August 1 to the end of the playoffs. That’s a club that knows when it’s winning time.