TAMPA, Fla. – Reno 1868 FC forward Danny Musovski has been voted the USL Championship Player of the Week for Week 28 of the 2019 season. Musovski scored five goals across two games, including a four-goal haul in the first half of his side’s victory against Tacoma Defiance last Tuesday, to earn the weekly honor for the second time in his career.

Musovski received 44 percent of the poll conducted by a national panel of independent media representing every USL Championship market. Indy Eleven’s Ayoze finished second on 25 percent after recording two goals and 12 chances created over a pair of victories for the Eleven that helped the side clinch a place in the USL Championship Playoffs. 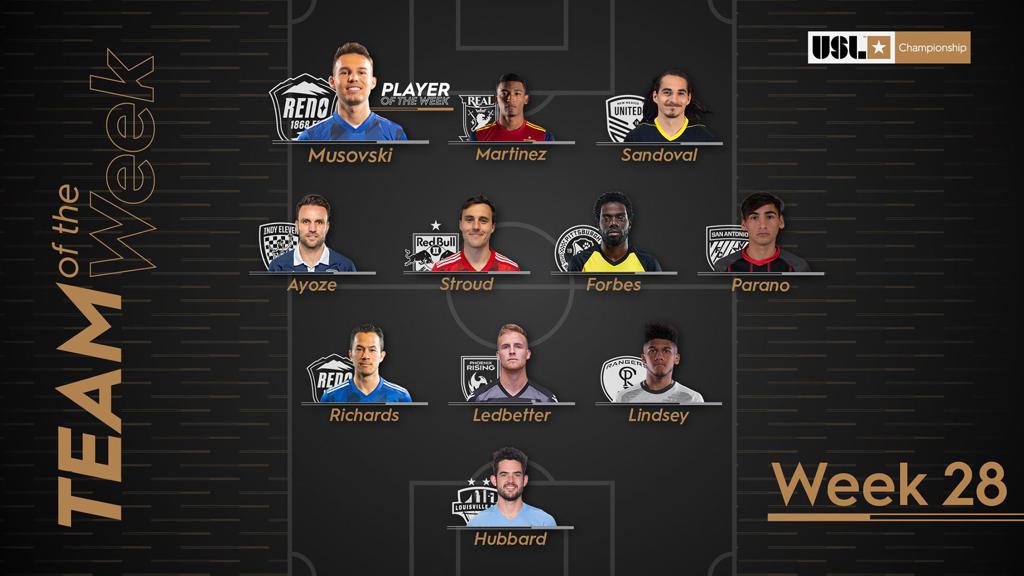 GK – Chris Hubbard, Louisville City FC: Hubbard recorded a four-save shutout in a performance that also saw him claim three catches and make 12 recoveries in LouCity’s shutout victory on the road in Hartford.

D – Jaylin Lindsey, Swope Park Rangers: Lindsey contributed to a pair of shutouts for the Rangers, recording the assist on the side’s game-winning goal against North Carolina FC while completing 72 of 85 passes across the week.

M – Ayoze, Indy Eleven: Ayoze scored a pair of goals in the Eleven’s victory against Ottawa Fury FC on Wednesday night and had 12 chances created overall in a two-win week for the side.

M – Jared Stroud, New York Red Bulls II: Stroud recorded a goal and assist – becoming the first player in Red Bulls II history to reach 20 goals and 20 assists for the club – as New York clinched its place in the playoffs with a 2-0 win against the Charlotte Independence.

F – Daniel Musovski, Reno 1868 FC: Musovski scored five goals – including a four-goal haul against Tacoma Defiance on Tuesday night – and added one assist as Reno took a pair of victories over the week.

F – Douglas Martinez, Real Monarchs SLC: Martinez notched a four-goal outing and completed 14 of 17 passes as the Monarchs swept to victory against the Portland Timbers 2 on Saturday afternoon.