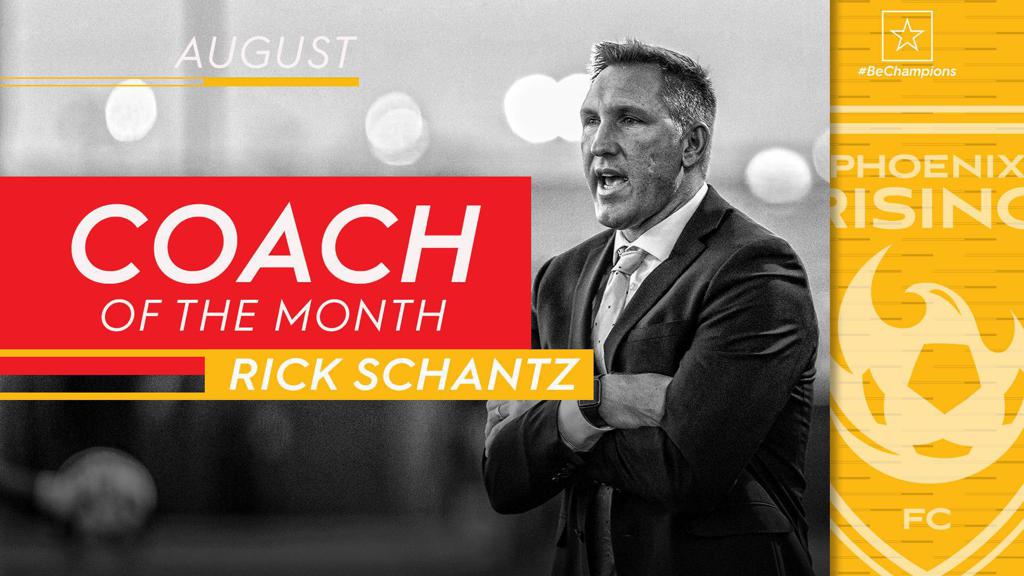 TAMPA, Fla. – Phoenix Rising FC’s Rick Schantz has been voted the USL Championship’s Coach of the Month for August, earning his second monthly award of the 2019 season after leading the club to six consecutive victories that ran its Championship-record winning streak to 17 games at the end of the month.

Schantz was previously voted the Championship’s Coach of the Month for June, with this award his third overall since taking the reins at Rising FC in June 2018. Phoenix’s winning streak is now at 18 games after this past Saturday’s victory against San Antonio FC, with Rising FC set to take on Las Vegas Lights FC on Wednesday night in the USL Championship Game of the Week on ESPN as it looks to continue its drive toward the Championship’s regular season title.

“After such a challenging month of six games I can only say thank you to the staff and players,” said Schantz. “This award continues to be representative of more than just one person. I am blessed to work with such tremendous people who expect the best from me every day and in return, they give their best to the club.”

Under Schantz, Rising FC has a handful of the Championship’s single-season records currently in its sights having already clinched a place in the USL Championship Playoffs. It needs four wins in its final seven games to surpass FC Cincinnati’s record of 23 total wins, and 13 points over the same span to pass the mark for most points in a regular season in league history. The club is also four goals away from setting a new single-season mark for the most goals in a regular season.

Schantz received 81 percent of the vote to take the award, the largest total of any winner of this award in 2019. Pittsburgh Riverhounds SC’s Bob Lilley finished second on 13 percent after leading the Hounds to five wins in six contests that placed the side in contention for a top-four finish in the Eastern Conference at the end of the season.