MURRAY: Once More, Kelly Is Man of the Moment 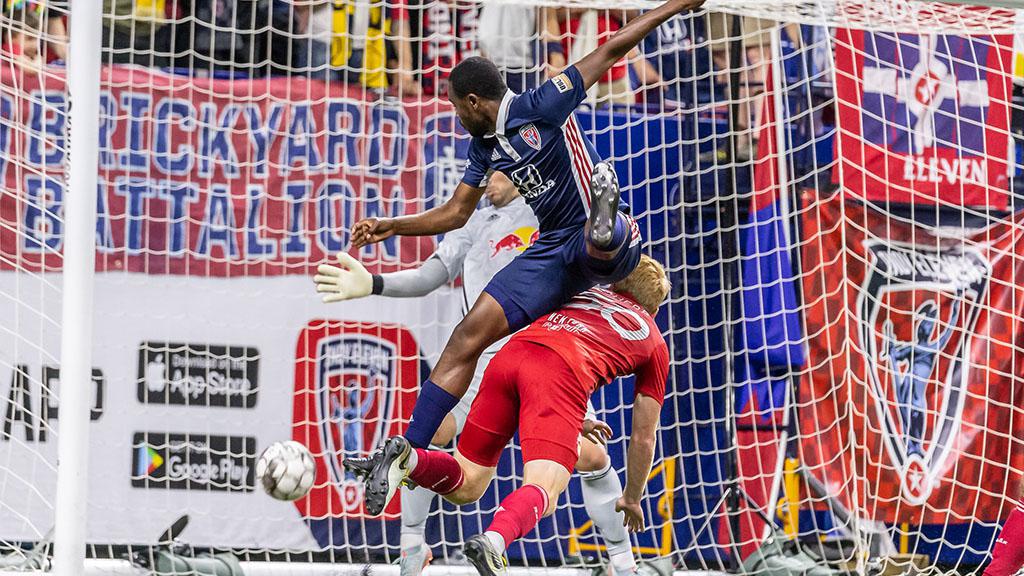 INDIANAPOLIS – The New York Red Bulls II had more shots and more chances, regularly on the verge of a breakthrough.

Indy Eleven’s defense had the hardest night it has faced all season at Lucas Oil Stadium.

But after the visitors’ chances uncharacteristically came and went without a goal, the player who has delivered more often than any other in the USL Championship’s history made his first chance count.

It’s been eight years since Dane Kelly first arrived in the Championship on loan as a member of the Charleston Battery, and he’s scored many memorable and important goals, but you can add the 83rd-minute game-winner that lifted Indy to victory in front of 9,124 fans at on Wednesday night to the list.

Introduced five minutes earlier to provide a final attacking push by Head Coach Martin Rennie, the Jamaican set up shop on the left side as play developed on the right. When fellow substitute Macauley King was found in space by Drew Conner to deliver a first-time cross, Kelly was the man at the back post, rising above his defender to power home.

“We knew [Tyler] Pasher couldn’t keep going behind for 90 minutes, so we felt that maybe with a little bit of time left that Dane would be a threat behind,” said Rennie. “That worked out well for us because then it keeps them honest all of the time. It was a great goal for us and, like I said in the beginning, against a really good team, lots of good players.”

How good were the Red Bulls II? No visitor to Lucas Oil Stadium so far this season generated as many shots (19) or shots on goal (5) as New York did throughout the contest. It certainly looked at times that Indy’s lengthy home undefeated streak that dates back more than a year was on the line.

There were the two outstanding long-range efforts by Janos Loebe, one of which almost knocked the crossbar off its posts in first-half stoppage time, the second denied by an outstanding save from Indy goalkeeper Evan Newton with 16 minutes to go. Another great flicked near-post finish by Tom Barlow also produced a one-handed reflex stop from the veteran goalkeeper.

“Evan made a couple of really good saves, especially in the second half,” said Rennie. “There were two or three saves that came in quick succession and were game-winning saves that made a significant difference to the result of the of the game. It got us a clean sheet. On the other end, we managed to put the ball in the back of the net which gives us the win. He did a great job.” 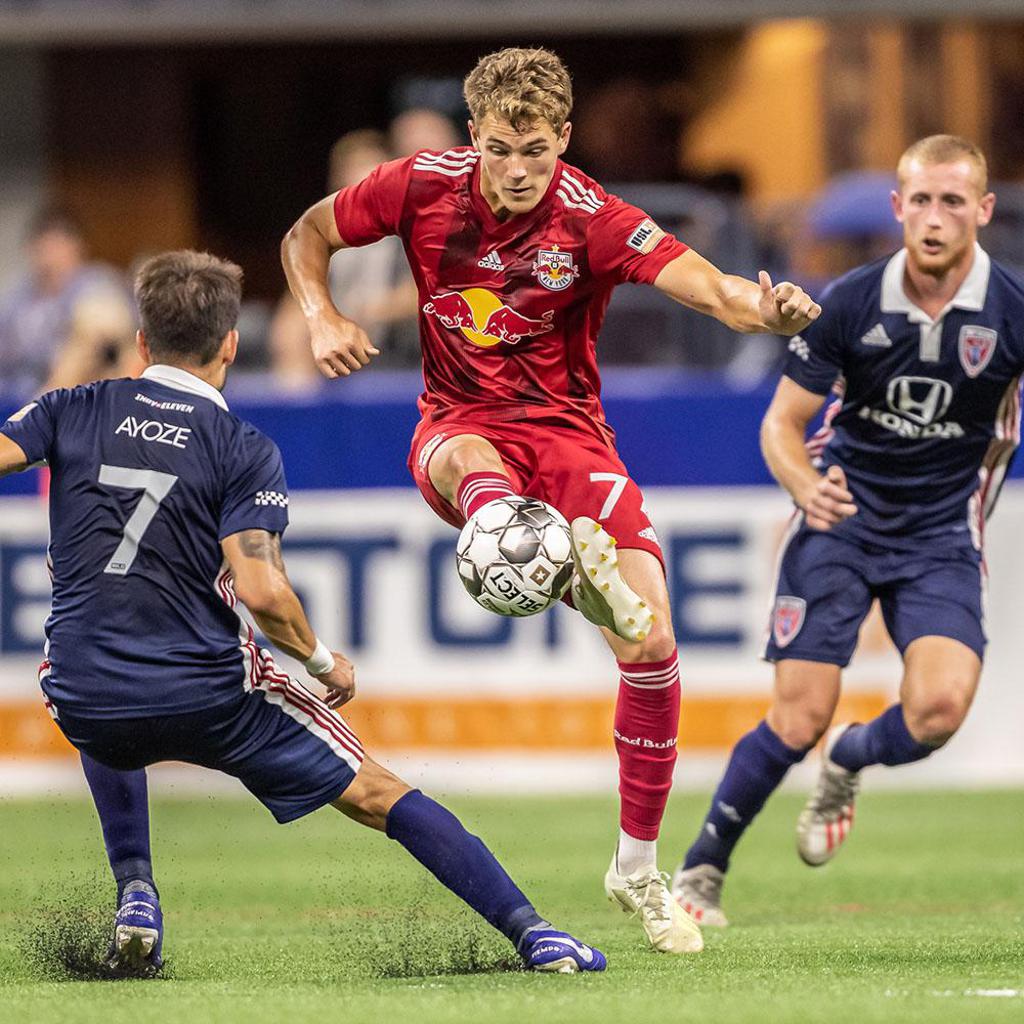 And yet, the Red Bulls II will walk away wondering how their normally assured touch in front of net deserted them. Two early efforts by Mathias Jorgensen should have found the target, and even more glaringly so should Vincent Bezecourt’s skied first-time shot off a tremendous cutback by Jared Stroud with the game still scoreless with 15 minutes to go.

Instead, Indy’s defense escaped with its ninth home shutout of the season, and thanks to Kelly a major leg-up in the race for first place in the Championship’s Eastern Conference. The Eleven now hold a six-point cushion on their closest rivals in terms of maximum points available and are undefeated in 21 games at home. If the road to the Eastern Conference’s place in the USL Championship Final runs through Lucas Oil Stadium, it’s doubtful anyone will relish that trip. 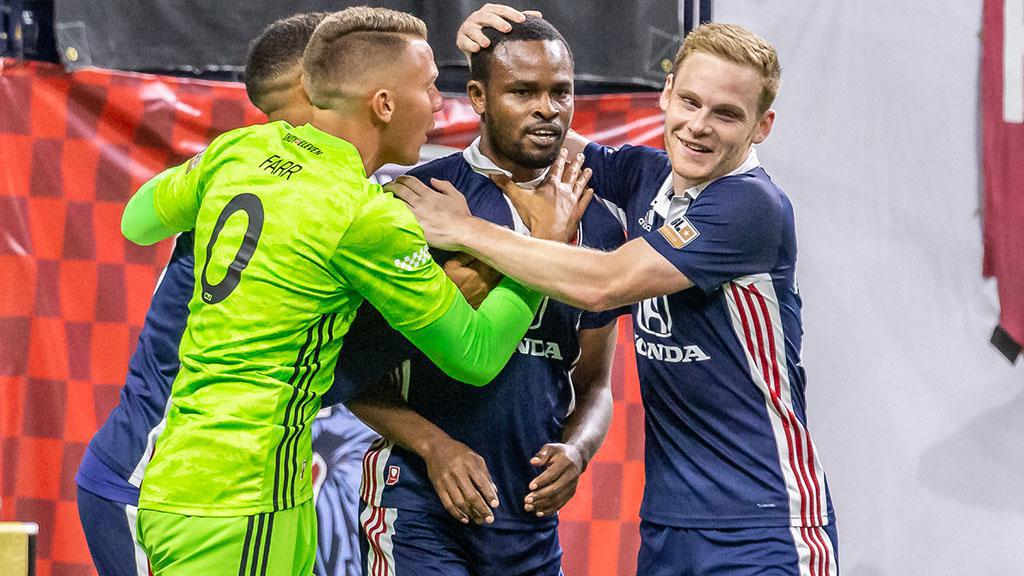 Indy Eleven forward Dane Kelly is congratulated by his teammates after scoring what proved to be the game-winner against the New York Red Bulls II on Wednesday at Lucas Oil Stadium. | Photo courtesy Trevor Trevor Ruszkowski / Indy Eleven

Even more so if Kelly is rounding into form. The Championship’s all-time leader in regular-season goals has now scored twice in his last three appearances after what has been a trying first season for the Eleven, with Wednesday’s game-winner following another finish that stood as the winner against Saint Louis FC on August 18.

“It was a great cross, and Dane got a great goal for us,” said Rennie. “Hopefully that really builds his confidence.”

With the top of the Eastern Conference now in sight, Indy is hoping it has another familiar standard bearer ready to lead the charge.