Jamaican forward had two goals, one assist as Hounds romped to victory in Ottawa

TAMPA, Fla. – Pittsburgh Riverhounds SC forward Neco Brett has been voted the USL Championship Player of the Week for Week 26 of the 2019 season. Brett recorded two goals and one assist as the Hounds swept to a 4-0 victory on the road against Ottawa Fury FC on Friday night to bolster its chances at a top-four finish in the Eastern Conference. 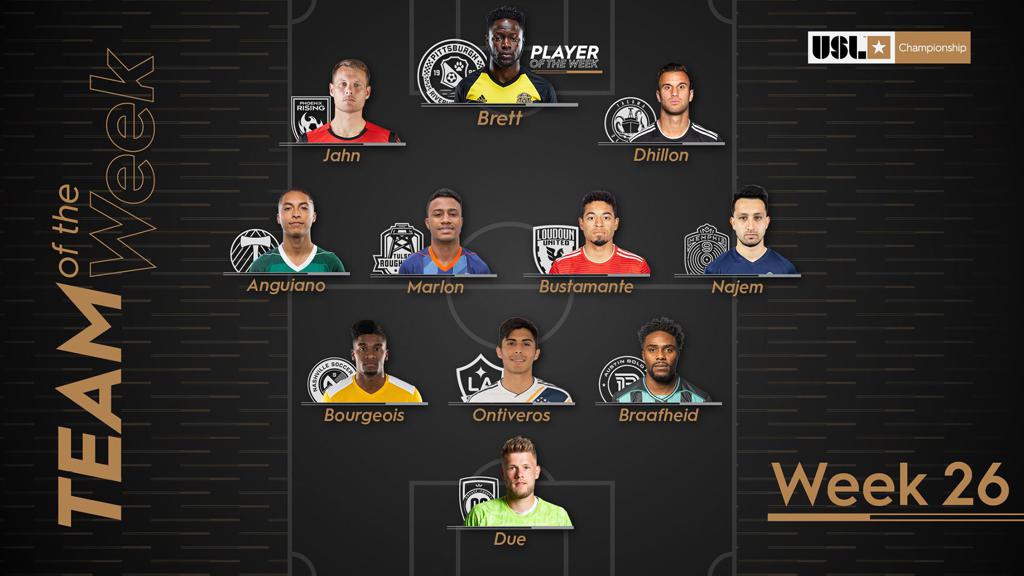 GK – Frederick Due, Orange County SC: Due marked his debut for OCSC with a seven-save shutout that proved key in the side’s 2-0 victory over New Mexico United at Isotopes Park.

D – Bradley Bourgeois, Nashville SC: Bourgeois recorded the assist on NSC’s game-winning goal in a performance that saw him complete 30 of 33 passes and win 5 of 7 duels in Nashville’s victory against Tampa Bay.

D – Edson Braafheid, Austin Bold FC: Braafheid completed 52 of 57 passes, went 3 of 3 in duels and made six recoveries as Bold FC claimed the Copa Tejas with a 3-0 victory against Rio Grande Valley FC.

M – Marlon, Tulsa Roughnecks FC: The Brazilian broke out in his second game for the Roughnecks, recording one goal and one assist while winning 14 of 21 duels and completing 5 of 5 dribbles.

M – Antonio Bustamante, Loudoun United FC: Bustamante scored a highlight reel goal to cap an outing in which he completed 40 of 44 passes, won 4 of 5 duels and made six recoveries in United’s 4-0 win against North Carolina FC.

F – Justin Dhillon, Tacoma Defiance: Dhillon notched two goals and one assist across a pair of contests during the week, including the Defiance’s 5-1 drubbing of San Antonio FC on Friday night.