The 18 – Nashville’s Smith Makes All the Right Moves 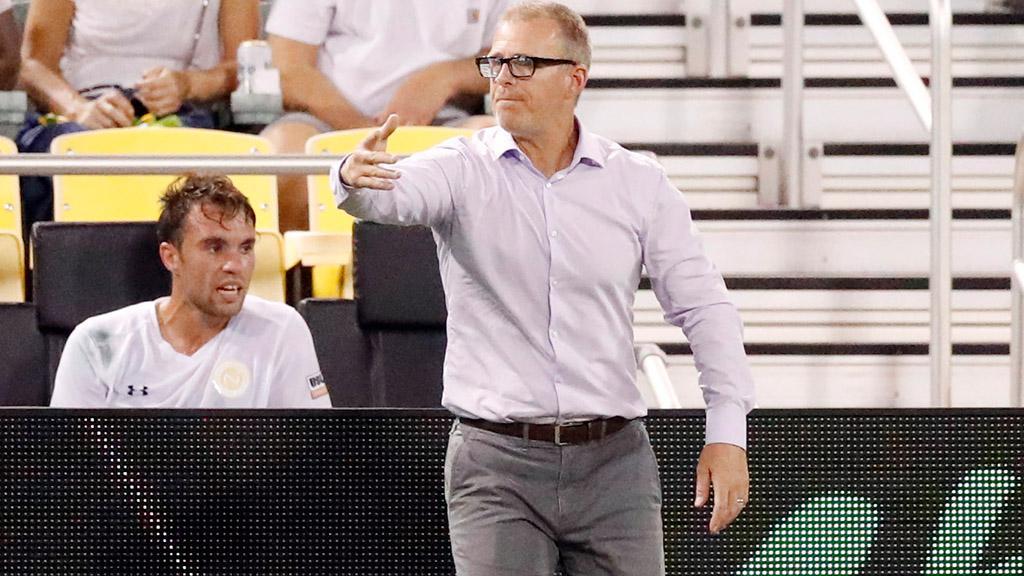 ST. PETERSBURG, Fla. – With an hour gone, it seemed like there was only going to be one side capable of winning Saturday night’s contest between the host Tampa Bay Rowdies and visiting Nashville SC at Al Lang Stadium.

At that point, the Rowdies had taken the first eight shots of the half, including an equalizer by Sebastian Guenzatti five minutes in that had served as his 14th goal of the season, a modern-era Rowdies regular-season record. Nashville had hardly been able to get out of its own half, the forward trio of Ropapa Mensah, Lebo Moloto and Cameron Lancaster only registering 10 touches in Tampa Bay’s half over that span.

And then Nashville Head Coach Gary Smith made all the right moves to allow the visitors to grab a signature victory for its season.

First, there was the introduction of Alan Winn for Moloto in the 62nd minute, which added another workhorse to the midfield that allowed Nashville to regain some balance in the game. Winn finished the game winning 4 of 5 duels and completed 12 of 14 passes, exactly what was needed.

Nine minutes later, Smith brought on Kharlton Belmar for Lancaster, who battled gamely and cleverly set up Nashville’s opening goal with a free kick that fired under a Rowdies’ defensive wall whose coordinated jump allowed the ball to force a save by goalkeeper John McCarthy, giving Moloto the chance to clean up the rebound.

Belmar – who has had a frustrating 2019 – then showed off why there were such high expectations when he arrived alongside Lancaster and Daniel Rios this offseason with a sublime finish off Bradley Bourgeois’ lifted through-ball that proved decisive.

Between Winn’s introduction and the 85th minute – after which point the Rowdies put in a final flurry of shots in search of an equalizer – Nashville not only gained the lead, but held Tampa Bay to two shots, neither of which was on target.

And Smith’s display of knowing which buttons to press made all the difference in a victory that could make a massive difference in Nashville’s final position by the time the postseason arrives.

1. As big as Nashville’s victory was, there was little somberness in the Rowdies’ camp after it slipped to third place in the standings. Nor necessarily should there be after a game in which it recorded 20 shots, put eight on target and on another night might have made its early second-half pressure count even more before Smith had time to counteract it. “In the second half I thought we really stepped up,” said Rowdies Head Coach Neill Collins. “I thought we were excellent in pretty much every aspect of our play. We didn’t punish them, then we switched off and they punished us. Give me that performance between now and the end of the season and I’ll be a happy man.”

2. Nashville’s big road win aside, if there was an underlying theme to the past few days of action, it was the weekend of the underdog. From Tacoma Defiance blasting San Antonio FC on Friday night to what on paper were unexpected victories on Saturday by Loudoun United FC, Tulsa Roughnecks FC and the Portland Timbers 2, the formbook got shaken up in remarkable fashion.

3. Let’s start with the Defiance – rated an 18 percent chance to take victory pregame by fivethirtyeight.com – whose near-miss against Phoenix Rising FC in midweek didn’t deter them from pulling off an incredible 5-1 victory against playoff contender San Antonio at Cheney Stadium. The Defiance picked apart San Antonio’s defense in all manner of ways to register 11 of its 12 shots from inside the penalty area to make it a tough night for SAFC goalkeeper Matt Cardone, who in fairness would have done well to keep out the big chances the hosts created.

4. The night was punctuated by Tacoma’s final goal of the night, which began and was finished by Justin Dhillon. Yes, that’s the forward making the clearing header at the top of his penalty area before bombing upfield to support Alec Diaz on the counterattack, capping the move with the Defiance’s lone shot from outside the penalty area as he picked out the right corner of the net.

5. On the flipside, it was another night when San Antonio’s vacillations between looking like a team capable of springing a surprise in the playoffs and one that is going to get picked off in the play-in round – if it makes it that far – once again swung the way of disappointment. A visit to face Phoenix is up next this Saturday, a game in which San Antonio must be at its best to stand any chance of getting a result.

6. The next night it was the turn of Loudoun – 21 percent chance to take victory – as it earned its first victory at Segra Field with a 4-0 win against North Carolina FC that put a serious dent in the top-four aspirations of the visitors.

7. Simply put, North Carolina wasn’t at the races until it was far too late; the visitors didn’t register a shot on goal until it had conceded four times, which coincidentally was the number of shots NCFC had taken overall by the time Elvis Amoh’s goal found the net in the 63rd minute to give Loudoun its final margin of victory. But that’s a massive credit to the way United controlled the game, with Antonio Bustamante’s finish of a training ground free kick the highlight of a highly satisfying display for the hosts.

8. Soon after it was Tulsa Roughnecks FC – 18 percent chance to take victory – that turned up a surprise as it defeated Fresno FC, which had come in having won three of its last four outings to take control of second place in the Western Conference. An incredible bicycle kick by Rodrigo Da Costa got things underway early, only for the hosts to let Fresno equalize – the third time since June 29 that the Roughnecks had come out to score inside the opening 10 minutes only to let a lead slip away.

9. This time, though, the Roughnecks regained their footing thanks to a goal inside the opening minute of the second half and then rode out the pressure the Foxes applied to try and find an equalizer. There was definitely an element of good fortune for the hosts late on when Jackson blazed a penalty kick over the crossbar – the Opta commentary from the Match Center adding salt to the wound saying the Brazilian “should be disappointed” – but for a side that claimed its first victory since April 24 a little bit of good luck after the disappointments that have befallen it after a hot start to the year was certainly a welcome moment.

10. Fresno’s defeat left the door open for Reno 1868 FC to pull level on points in second place later that night. Easy enough against a Portland Timber 2 side it had defeated in six of the previous seven meetings between the sides, right? In the immortal words of College Gameday’s Lee Corso, not so fast my friend.

11. T2 – a 21 percent chance to take victory – came out and put pressure on their hosts from the opening whistle, and could have taken a bigger lead than the two-goal advantage they had at halftime thanks to goals by Ryan Sierakowski and Carlos Anguiano if not for a pair of good saves by United States U-23 National Team goalkeeper JT Marcinkowski. When Cristian Ojeda made it a three-goal lead six minutes into the second half, though, Portland was able to cruise to its first victory in club history over Reno, and a handy boost to its playoff chances.

12. Portland wasn’t the only side to claim a notable first victory over the weekend. The LA Galaxy II’s 1-0 win against Sacramento Republic FC also fit that bill with it serving as the first time Los Dos had defeated its Northern California rivals on its home turf at Dignity Health Sports Park.

13. The Galaxy II have had some famous wins against Sacramento – who can forget the night they ruined Preki’s farewell? – but all of them had come at Papa Murphy’s Park with Sacramento having gone eight games undefeated on the road in the series prior to Saturday night. This time around, Los Dos were simply sharper in the attacking end, an early goal-line clearance by Republic FC’s Jordan McCrary denying Geoffrey Acheampong and a late shot off the crossbar by Don Tchilao the only reason the hosts didn’t win by a larger margin.

14. Portland and LA’s victories meant another week in which the battle around the playoff line in the Western Conference continued to remain in a state of flux. That’s in part because so few of the teams between fourth and 14th place – where the gap now sits at eight points – have been able to string together a solid winning streak. Of the teams in that group, only sixth-place Real Monarchs SLC, seventh-place Orange County SC, 10th-place Sacramento Republic FC and 13th-place El Paso Locomotive FC have been able to produce runs of at least three consecutive wins at any point this season.

15. Orange County was the latest team to achieve that on Sunday night as it took a 2-0 victory on the road against New Mexico United at Isotopes Park thanks to a pair of well-taken finishes early in the second half. In the middle of both was Harry Forrester, who played a role in the build-up before Darwin Jones slipped in Jerry van Ewijk for the opening goal before Forrester’s nutmeg pass to Michael Seaton set up the second quickly after. Forrester has been credited with three “2nd assists” this season by Opta, most in the Championship, so while he’s only found the net once himself, the former Rangers man has clearly been influential to a greater extent than his five assists and 29 chances created might let on.

16. As smoothly as Orange County executed in the attacking end, the game was about as ideal an introduction as the club’s fans could have hoped for in goalkeeper Frederick Due’s debut for the side. Acquired from Hartford Athletic to provide cover for Aaron Cervantes – who was last week called up for the final United States U-17s training camp before the FIFA U-17 World Cup next month – Due was excellent in a seven-save shutout as he frustrated the hosts repeatedly.

17. The team that Orange County and everyone else is now chasing for fourth place – and a home contest in the Western Conference Quarterfinals – is Austin Bold FC, which was the good version of itself on Sunday night in defeating Rio Grande Valley FC 3-0 at Bold Stadium to become the first winner of the Copa Tejas. Bold FC had to withstand a good opening spell from the Toros but came through it without having allowed a shot on goal, and then executed perfectly on Ema Twumasi’s opener after the 36th minute for a lead it wouldn’t concede.

18. Did Austin catch a major break right before halftime? Probably, yes, replay certainly seemed to indicate that Toros goalkeeper Nico Corti didn’t come close to handling outside his penalty area in the incident that saw him sent off, but from then on Bold FC did exactly what a side up a player should and rammed that advantage home. The big question now is whether Austin can find a way to produce like this consistently down the stretch; Bold FC has only won back-to-back games once all season. If it can, there are a lot of experienced heads in this lineup that could make the playoffs very interesting.