MURRAY: For Birmingham, One Streak Ends, But Magic Continues

CHESTER, Pa. – For Birmingham Legion FC, one streak is over.

The club’s shutout streak, cultivated over six consecutive games, came to an end on Sunday evening after 624 minutes, the fourth-longest in the USL Championship’s history.

But much more importantly for Head Coach Tom Soehn and his side, another streak lived on, the one that has the first-year club currently on course for a place in the USL Championship Playoffs come October.

Legion FC’s 3-2 victory on the road against fellow playoff contender Bethlehem Steel FC was a far cry from the way the club has been getting things done lately. Both teams ended with nine men after four red cards were shown, while the game itself lurched back and forth over a span of nine second-half minutes that threatened to not only end Legion FC’s shutout streak, but its six-game undefeated run as well.

Another carefully created 1-0 victory, this was not.

After JJ Williams had put Birmingham two goals to the good in the 67th minute it took just two minutes for Steel FC to let the visitors know the game was far from over as Michee Ngalina became the first player since Pittsburgh Riverhounds SC’s Christian Volesky on June 29 to score against Legion FC goalkeeper Matt Van Oekel.

An ill-advised challenge by Razak Cromwell followed, pulling down Steel FC’s Faris off the ball in the penalty area before Matt Real’s cross from the left had even been delivered. Bethlehem’s Olivier Mbaizo leveled things up from the penalty spot as the hosts looked ready for more.

But if it only took two minutes for the pendulum to swing the way of Bethlehem initially, it took the same span to shift back the way of the visitors immediately after. Legion FC midfielder Prosper Kasim was surefooted throughout the contest, including on the opening goal after 20 minutes, except when the perfect moment for a mishit presented itself.

It surely wasn’t the intention of the 22-year-old Ghanaian to shank his chance at the top of the penalty area when the ball fell to him after a free kick by Eric Avila, but when the ball broke to teammate Mikey Lopez off a stray Steel FC leg, Birmingham’s captain produced the finish his side needed to put it back in the ascendancy.

It’s exactly the sort of break a team destined for a postseason berth finds go its way. And now, with a seven-game undefeated streak that has seen the side win six times in hand, Legion FC is in the driver’s seat. 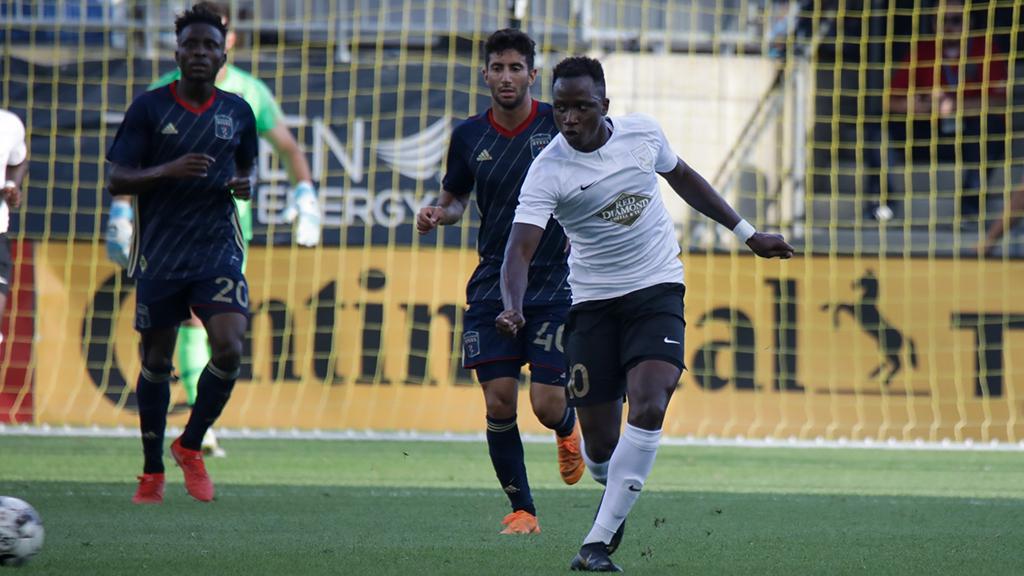 “I just think it’s a belief right now,” said Soehn. “We obviously got a goal against us, which hasn’t happened in a while, but still found a way to come back after they tied it up. Again, credit to the guys for finding a way.”

Now that they’re in position, the next test will be to maintain it.

While Sunday’s contest was wildly entertaining for those watching, the disciplinary hangover for Wednesday’s game against Loudoun United FC – which will view the contest at Segra Field as a must-win for its own playoff chances – will be a challenge for Soehn and his side.

“We have our hands full because we lose three guys for the next one,” said Soehn. “We lose Mikey [Lopez, yellow card accumulation], Zach [Herivaux, red card suspension], and [Razak] Cromwell [red card suspension]. So that kind of takes away from the three points, which are so vital, because now in a coach’s mind, you’re already foreshadowing how we’re going to come out Wednesday [at Loudoun United].”

Then of course, there is the small matter of what looks on paper to be the next “biggest game of the season” for Legion FC when 11th-place Saint Louis FC visits BBVA Field on Friday, September 13. As was noted a month ago, it’s six-pointers around the playoff line like this that end up making or breaking a season. If Legion FC takes all three points there, the door to the postseason flies wide open.

After all, one month ago, Legion FC’s playoff odds sat at just six percent. Now, according to fivethirtyeight.com, they’re sitting at a 67 percent chance to be part of the postseason, with 10 games left to make it happen.

And while there may not be be donuts waiting for Van Oekel and his defense on Tuesday morning, the promise of something even better awaits.

The streak is dead. Long live the streak.