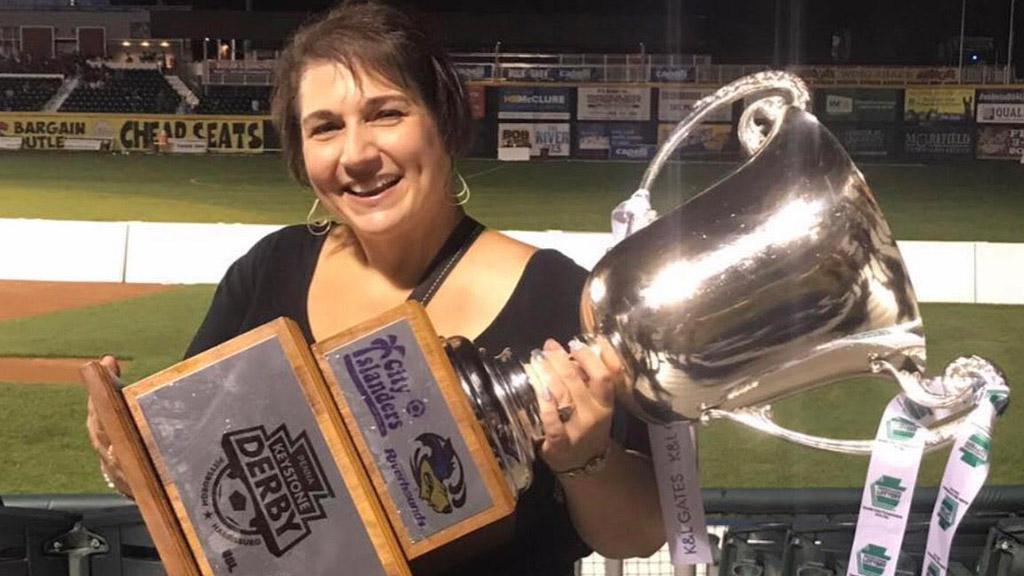 A co-founder and the current President of the Steel Army, Maria Petrillo has been at the center of the group's rising profile as well as playing a key role in its pregame tifo. | Photo courtesy Maria Petrillo / Steel Army

As one of the founders of the Steel Army more than a decade ago and having served as the group’s President for the last five years, Maria Petrillo has seen the numerous ups and downs that have been part of Pittsburgh Riverhounds SC’s history.

But in addition to her duties as the organization’s leader, she also plays a key role in bringing the tifos that have risen above the Steel Army’s section to life.

“I like to sew, and it was really funny how I could work my sewing skills into tifo,” Petrillo said by phone recently. “I never thought as soccer supporter one of my go-to things would be sewing.”

Working with fellow members of the group, Petrillo is tasked with creating the large fabric backdrops that provide the template before the outlines are drawn and painted. From there, the creativity of the group takes over, whether it be a giant version of The Simpson’s character Montgomery Burns issuing the command to “Release The Hounds” or a tribute to the club’s “Magnificent Eleven” that have been among the eye-catching displays the Steel Army has created season by season. 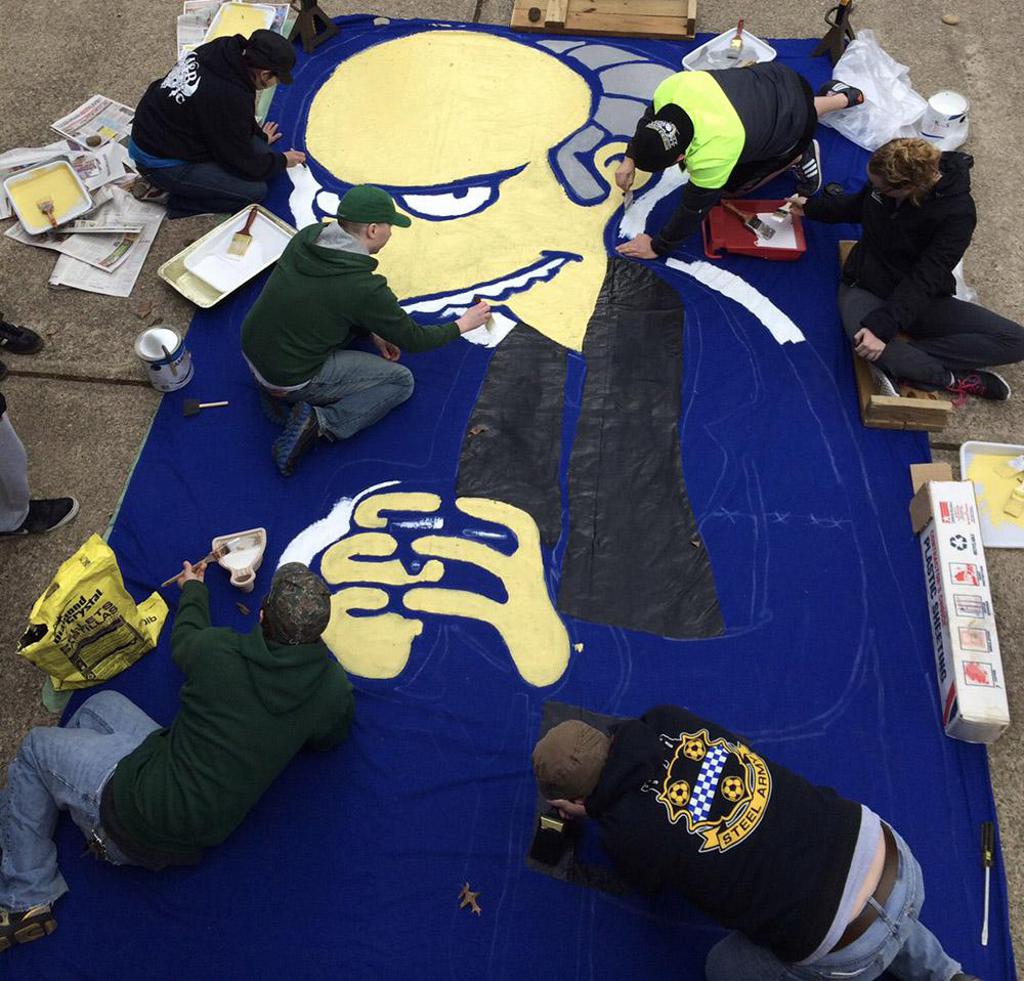 Revealed before the club's 2014 home opener, the C. Montgomery Burns tifo remains one of the most memorable in the Championship's history. | Photo courtesy Steel Army

The group’s place in the west stand at Highmark Stadium is certainly a very long way from its origins, when the Hounds were playing in the Chartiers Valley a decade ago. Petrillo and others who regularly gathered at Piper’s Pub, a local soccer bar, decided to form the group in 2007 and were on hand when the team returned to action in the 2008 season after a year’s hiatus.

But with the stadium located well outside the city, while the players and the club were welcoming of the new group’s arrival, attitudes toward a vocal presence in the stands certainly wasn’t welcomed by all.

“[Chartiers Valley] was not ready for a supporters’ group,” said Petrillo. “With soccer in America, it’s sometimes hard. We were always being told, ‘the team appreciates what you do, the team wants to hear you singing and chanting the whole game,’ but in America that’s not always what people want. You can go out with your family, and if you’re not aware of soccer’s culture, sometimes you don’t want to hear people screaming for 90 minutes or standing for 90 minutes.”

And while attitudes have certainly changed – particularly as many more American sports fans get exposed to the culture of soccer supporters’ groups around the United States and in the rest of the world – there can still be challenges groups like the Steel Army face as Pittsburgh has gotten to better know its local club.

“Especially where we stand, the entire stand is general admission, so people come in and find a seat, and maybe don’t realize until the beginning of the game that this is the standing section,” said Petrillo.

But those moments can be the best chance for the Steel Army to sell the experience they can offer for newcomers – either to the venue or the sport.

“We’re almost like ambassadors there,” added Petrillo. “If it’s a younger person, they join right in. Even little kids will join right in. Someone with a family, they might be a little more protective, a little more hesitant to join in, but I know I have a couple of people in the group if we see a family we’ll ask them aside and say, ‘hey, do you need help with your seats?’ or ‘does your kid want to play with the flag?’”

What else is changing is Pittsburgh’s profile as a city. The industrial town people remember from the last century has been replaced by a city that has a high profile in the technology and healthcare sectors. Those new industries – and the regeneration that has Pittsburgh considered among the most livable cities in America – are bringing newcomers to western Pennsylvania that 10 years ago might not have considered the city as a place to thrive. 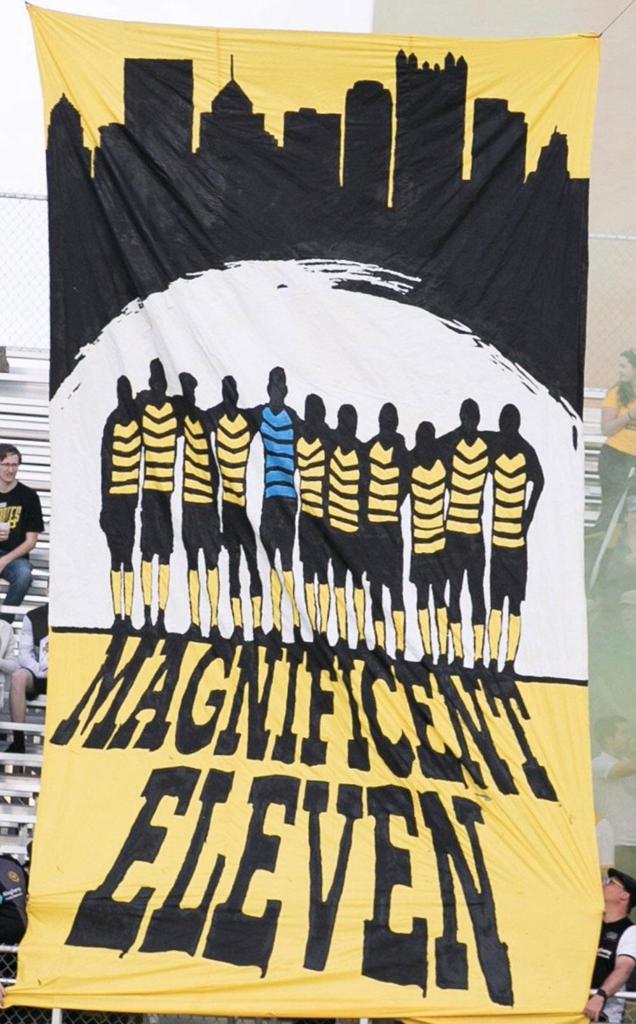 “Pittsburgh is a changing city,” said Petrillo. “We recently had a kid join who was living in Nashville, and what was one of the first things he did? He joined the Steel Army.”

As the Hounds’ profile rises, and the Steel Army’s alongside them, there might never have been a better time to be a soccer fan in the Steel City.

“When you hear something like, ‘support local soccer,’ you may have been in a rec league for years, but you weren’t going to Riverhounds’ games. Maybe you are now,” said Petrillo. “I really think it’s growing, and the team winning is really helpful. People want to go to a game, and they want to win.”