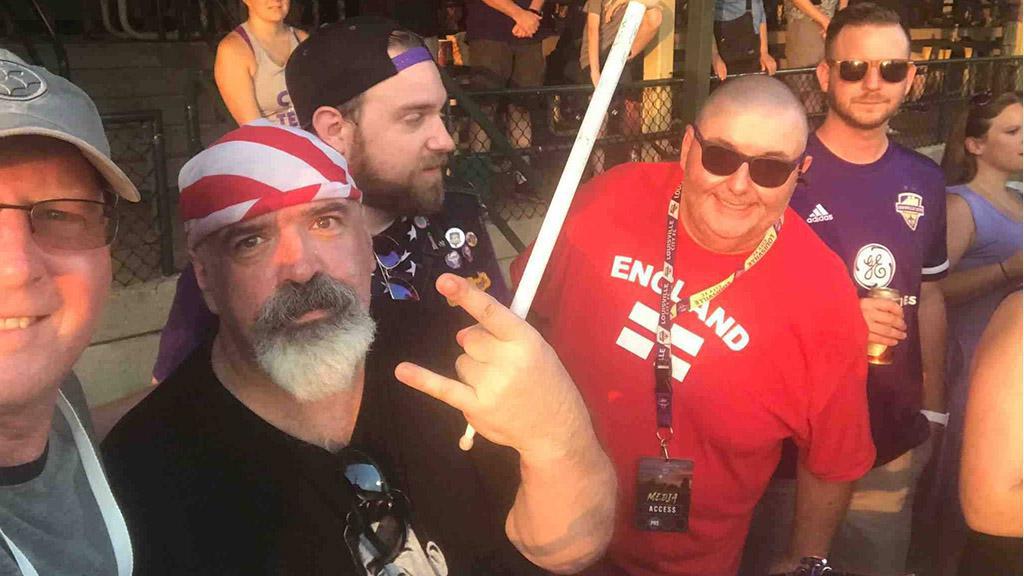 Named after Mike "Scouse" Bromilow (second-right), Scouse's House has become a feature at Louisville City FC's current home at Slugger Field, and will continue to as it moves into its soccer-specific stadium in 2020. | Photo courtesy Scouse's House

You could call it, “The Gospel According to Scouse”.

After all, since well before Louisville City FC’s first game in 2015, Mike “Scouse” Bromilow has been one of those spreading the gospel of soccer to the uninitiated, both at Molly Malone’s in the Highlands district of Louisville and in the supporter’s section named after him at Slugger Field, “Scouse’s House.”

“One of the main objections I heard was that soccer was boring just because you might go through a game where there’s only one goal scored,” said Bromilow, a Liverpool native that arrived in Louisville in 1992. “When they actually took the time to sit down with a true supporter to appreciate the game with them, and when they had questions, they could ask a question and someone would answer their questions, that helped out an awful lot.

“Having someone there that’s seen it and played it, or just having somebody there to explain what was going on, from there it just grew and grew and grew.”

Having grown up on the Kop at Anfield, Bromilow witnessed first-hand some of Liverpool’s finest teams with the likes of Phil Thompson, Kenny Dalglish, Alan Hansen, Graeme Souness and Ian Rush leading the way to success in the league and in Europe. But armed with that knowledge, Bromilow’s good humor and unexpectedly brusque previous experiences when trying to learn more about the native sports of his adopted home have meant that whatever the question, there will be no condescension, just simple pointers that can make it easy for new fans to know what they should be watching for.

It’s that attitude that has seen Scouse’s House – which sits behind the opposite goal to the Louisville Coopers in a section adorned with national flags made up of the nationalities of players and fans in the section alike – grow from the small group of ex-patriot fans that attended LouCity’s first game together to a capped group of 250 season ticket holders this season.

The location Bromilow and his fellow fans currently reside was the idea of the fans themselves, under the principle that a team should never shoot toward a goal that doesn’t have friendly fans behind it for encouragement. Bromilow pointed to examples from England – obviously including the Anfield Road end and the Kop at his beloved Liverpool – that helped the move along, with the group now having been in residence there since the start of the 2017 season.

The location also helps with the guidance Bromilow and the other core group that has been there since the beginning can offer newcomers, with the view of the field offering a perfect opportunity to see attacking play develop up and down the length of the field.

“We have a unique perspective from Scouse’s House, from our viewpoint we can see play developing,” said Bromilow. “We try to encourage people not to just look at the guy with the football, look at what’s happening off the football, look at the other side of the pitch and see how it’s developing. That’s one of the things that people didn’t realize, how complex the game really is, seeing the movement off the ball and what’s going on around the box.”

And as the club moves to its new stadium in 2020, Scouse’s House will move with it. The group is set to be stationed in the Waterfront Supporter Zone to replicate the location it holds at Slugger Field. It’s something that Bromilow certainly appreciates that LouCity’s front office took into consideration as the planning for the stadium construction was taking place.

“I really do have to applaud Louisville City, because from the get-go when we saw the concepts of the new stadium they were planning on building, they’ve engaged with all of the supporters of Louisville City and asked, ‘what is it that you guys want? What do you want to see, where do you want to be?’” said Bromilow. “And to everybody in Scouse’s House, we wanted the section we have almost replicated over at the new stadium, and that’s exactly what they’ve done.

“It’s not been a battle, they’ve sat us down and they’ve listened to us and instead of saying, ‘well, we might do that,’ they’ve gone out of the way to make sure the experience we have right now is going to be replicated at the new stadium, and everyone’s going to be welcome.” 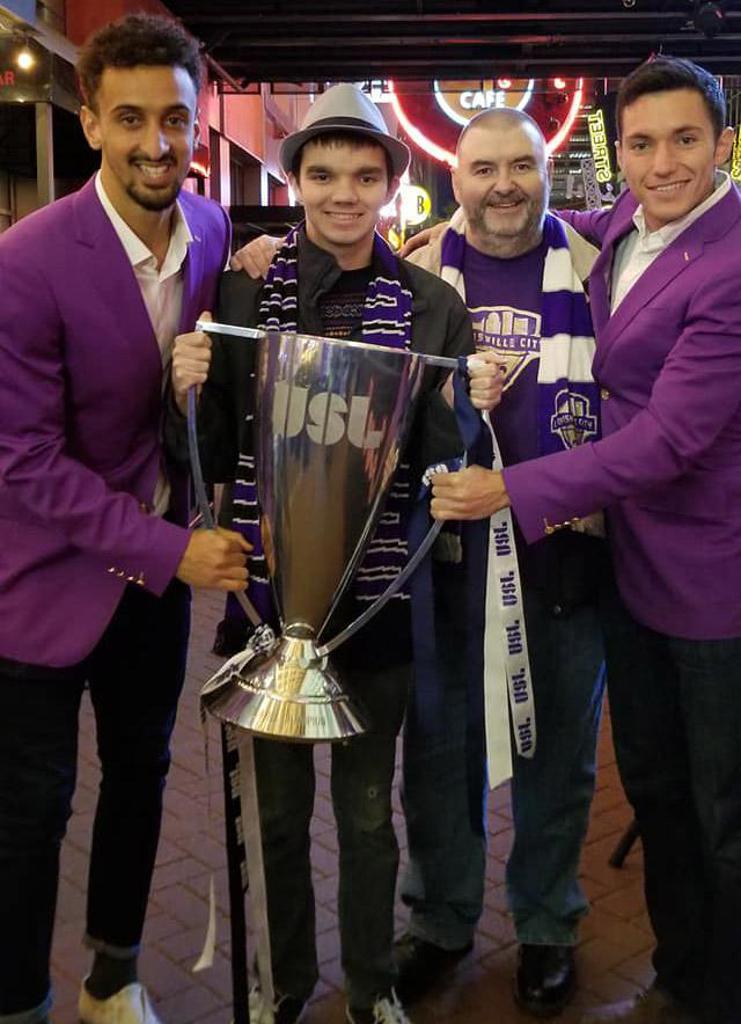 The experience for Bromilow now – both in following LouCity and Liverpool – is certainly very different than when he arrived in Louisville 27 years ago. Stationed in Bloomington, Indiana for a summer program called Camp America in 1988 – which was where the nickname “Scouse” was born – Bromilow met the person who would go on to become his wife. Four years later he emigrated so they could be married.

But at the time that meant leaving behind the biggest connection to his childhood home, Liverpool FC.

“The biggest obstacle that I had to overcome – the thing that made me homesick more than anything else – was not going to watch Liverpool play,” said Bromilow. “Living in Liverpool, every time Liverpool played, I was down there standing on the Kop, watching them live. Then I get over here, the only way I could follow Liverpool was to go down to our local bookstore and get a week-old newspaper and find out what they did last week, or call home, and it used to cost and arm and a leg just to do one phone call home to find out how Liverpool did.”

The advent of technology – first through the launch of Fox Soccer Channel, which aired Premier League games – and then the rapid advancement of the internet has made life as an ex-pat soccer fan far easier over the last 15 years, as has the game’s place in the consciousness of many sports fans. When Bromilow and friends started a Kentucky chapter of the Liverpool FC Supporters Group there were fewer than 10 official members. By this past June 1 when Liverpool played Tottenham Hotspur in the UEFA Champions League Final, Bromilow estimates there were at least 400 transatlantic Liverpool fans at Molly Malone’s for the festivities.

“It’s night and day,” Bromilow said. “I can watch any game I want. Instead of picking up a newspaper, I can pick up a cell phone and watch a game. It’s just so much more available, and it’s kind of funny, when I was home back in Liverpool over Christmas I was laughing with my brother because I get to see more live soccer games over here on the internet and the TV than they do, and they live around the corner from Anfield.”

But while Bromilow’s connection to his hometown club is as strong as it ever was, the friendships he’s formed with those that have brought Louisville City to life as a club in both the front office and in the stands have made the past five years almost as special. 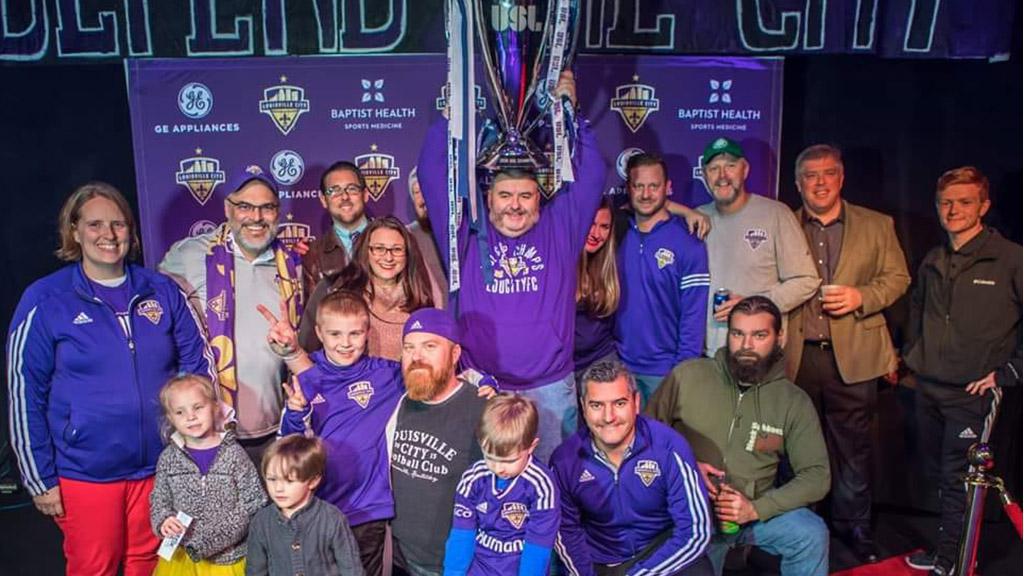 Mike "Scouse" Bromilow holds the 2018 USL Cup surrounded by friends and family that have made Scouse's House a great place to watch a game for fans of all kinds. | Photo courtesy Scouse's House

“I never thought in a million years I could go and support another soccer team, because the way I looked at it was there was Liverpool FC and there was Liverpool FC, and that’s it,” said Bromilow. “If I wanted to go watch a live game, it’s kind of difficult to go to Anfield every weekend, or go to England to watch a game, but you know what I can do? I can go to watch the local team where I live, and that’s our battle cry; come and support your local team because there’s nothing quite like going to watch a live football game.”

And when you do, go and watch it with someone like the man they call Scouse.

“When people come into Scouse’s House, they stay. They don’t walk away, they end up loving the game, and they always come back.”