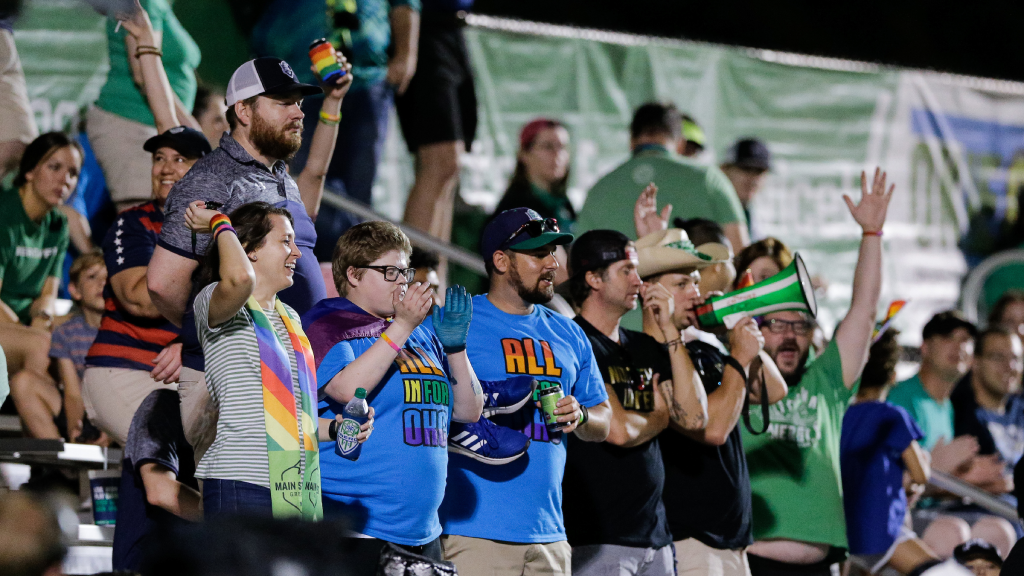 It’s a simple balance in most cases. One that Energy FC supporter Tim Chicoraske feels is applicable to many of the Championship clubs across the country, but especially to Oklahoma City.

“The biggest draw is how much Energy FC is involved in the community and the soccer culture and community it has built in Oklahoma,” said Chicoraske. “No matter what age, race, religion, culture, or community, people can gather to cheer on the international sport. We have a place to cheer on a great soccer team in Oklahoma.”

Founded in 2013 and beginning play in 2014, the club’s early success off the field led to a move to newly renovated Taft Stadium in 2015, the year momentum shifted Energy FC’s way with a deep run in the USL Championship Playoffs.

“One of my fondest memories is when we played LA Galaxy II in the Western Conference Final in 2015,” Chicoraske added. “Even though we lost the game, the packed stadium was electric with fan and player energy. It was probably the loudest, most intense Energy FC game I have experienced.”

What the club has built since its run in 2015 is nothing short of impressive. Fast forward four years and the club has reached the playoffs in two of three complete seasons so far, and on current form, look poised for another berth in 2019. It’s also made a significant impact through the “Fields and Futures” program founded by Co-Owners Liz and Tim McLaughlin, which since its founding has helped construct 22 playing fields for sports of all kinds around the city.

And the club itself is also looking to grow off the field. As well as Taft Stadium has served Energy FC over the past five seasons, the club’s leadership recently pitched the city on constructing its first soccer-specific stadium this year through the MAPS4 initiative.

Having looked on at similar projects that have successfully arrived in the Championship’s Western Conference in recent years, including Orange County SC’s Championship Stadium, Rio Grande Valley FC’s H-E-B Park and the new downtown venue currently being planned by Colorado Springs Switchbacks FC, Chicoraske believes the club’s profile would continue to rise should the project be approved.

“I am the most excited about the prospect of OKC and Energy FC building a new stadium,” he said. “Energy FC is currently looking for funding through our city’s MAPS4 project, which has historically added so many great things on to our great city. If approved, a publicly-funded stadium could only raise the profile of soccer as a popular OKC sport.”

In a city whose sporting history included football, stock car racing, rodeo, baseball, basketball and so much more, Chicoraske sees a bright future as soccer finds its place among the local fanbase.

“Having soccer grow as a popular sport in Oklahoma City makes being an Energy FC fan even better,” he said. “Local restaurants now host watch parties for away games. During the Women’s World Cup, Energy FC and our local pubs had standing room only crowds to watch the USA claim their fourth star! I believe the momentum built by Energy FC will only continue to grow the sport of soccer in OKC.”