While landscape has changed over seven seasons, longtime fan has built bonds with Phoenix players that endure 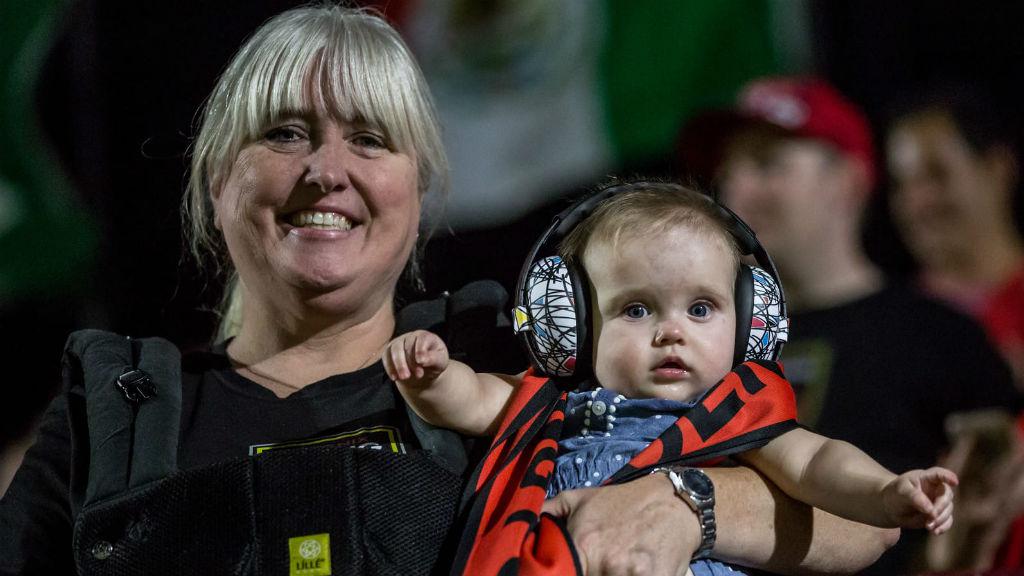 Over the past seven years, professional soccer in Phoenix has seen its fair share of change.

One of the few constants over that time has been the presence and support of Mon McPherson.

McPherson, whose love of the beautiful game grew after spending six years living in the English city of Warrington – which sits smack in the middle of Manchester and Liverpool, was a season ticket holder for the Wolves’ 2013 lone season in the Championship.

These days, there is rarely a Rising FC game you won’t find her at. McPherson has attended each of the club’s matches so far this season – both home and away – and only missed one game last season, Phoenix’s Western Conference Quarterfinal win over the Portland Timbers 2 at Casino Arizona Field.

“I had surgery on the same day, and they wouldn’t let me do it in between [the playoff games] so I wouldn’t miss a game at all,” said McPherson by phone recently. “So, I’m in my hospital bed and I’m watching the game, I had my bobbleheads and my jerseys and everything in my room and I’m yelling at my screen. And then I heard [commentators] Tyler [Terens] and Devon [Kerr] give me a shout out because they knew I was missing, and then I was just a mess of tears because of all the anesthesia and stuff. I was a hot mess in the hospital, but they won so we kept going on and I didn’t miss another match.”

Rising FC’s 2018 run to the title game holds a special place in McPherson’s heart, even despite the side’s eventual 1-0 defeat to Louisville City FC, as it still marked the most successful season in the club’s history. Phoenix failed to reach the playoffs in any of its first four campaigns – including the lone Wolves season – and dropped its first ever postseason contest in 2017 to the Swope Park Rangers on penalty kicks.

“Oh my gosh, can you imagine? Here I am, following the team that lost all the time through the years – win or lose, I still love them – but to watch them win, to even get there, even if they didn’t win, just to get there was so incredible,” said McPherson.

“I had tears of joy when we were in OC, it was just an incredible feeling to win,” she added about Rising FC’s 2-1 victory over Orange County SC that earned the side its first Western Conference crown. “And I had just had surgery, so I’m like running across the field holding a pillow where my surgery side was. I wasn’t going to miss it for anything. I jumped over a railing to get down to the field and everyone was freaking out because they knew I had just had surgery, so they were trying to help me get down and I was like ‘no, no, no, run’. It was so funny. It was the best day.”

McPherson has had her fair share of memorable moments at Rising FC games over the past few years, but those enjoyable experiences haven’t just been limited to stadiums across the Championship. One once-in-a-lifetime moment came at Phoenix Sky Harbor International Airport, where she was pulled aside by owner Berke Bakay to present a club scarf to new signing and Premier League legend Didier Drogba.

“When I scarfed him, I kind of like squealed a little bit,” McPherson said. “I really fangirled right then, and I was like ‘Oh my gosh, did I really just do that?’ Then, he hugged me.”

As the constant – and occasionally only – Rising FC supporter in attendance on the road, McPherson saw her relationship with Drogba develop into something more, as it has with many of the team’s players. 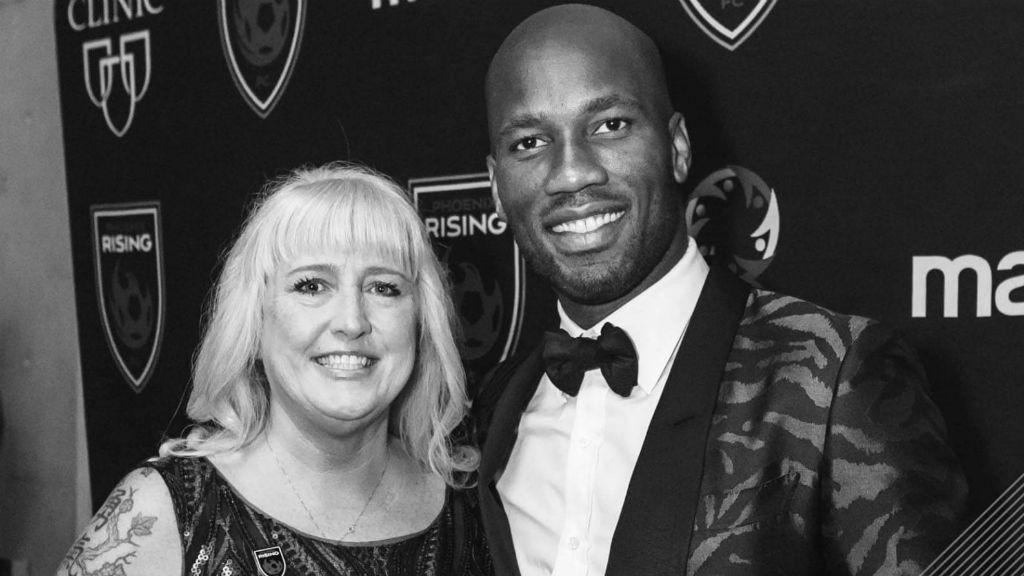 “Last season in Tulsa, he had taken his jersey off and was he holding it in his hands and he kept shaking his head no to everybody coming up to him,” McPherson said of Drogba, who had scored twice in Phoenix’s 5-1 win at ONEOK Field. “And he literally walked all the way to me, handed me his jersey, hugged me and said, ‘Thank you for coming’. It was such a moment, and I was able to get him to sign it and it’s very special to me.”

McPherson certainly makes Phoenix’s players and staff feel special as well. In addition to her constant presence in the stands, she goes above and beyond to help new faces adjust to their surroundings and make them feel at home.

She’s happy to give recommendations for things like what local grocery store to shop at or restaurant to eat at but has also adopted the unofficial title of team mom by occasionally baking cookies for players, staff and their families. She’s also even hosted some players for dinner, doing her best to whip up a familiar meal in a not-so-familiar environment.

“I’ve learned to cook African food, I’ve cooked Jamaican food, Spanish food,” said McPherson. “It’s really nice for me to learn how to do that and then when they like it it’s even better because it opens up my world for food as well. It’s quite fun, I enjoy that.”

The best part of it all though, is building relationships that endure.

McPherson continues to support former Phoenix players – from any era – that have moved on to other clubs, even rival ones. She’ll watch their games just to see how they do and try to visit with them when she and Rising FC roll into town. 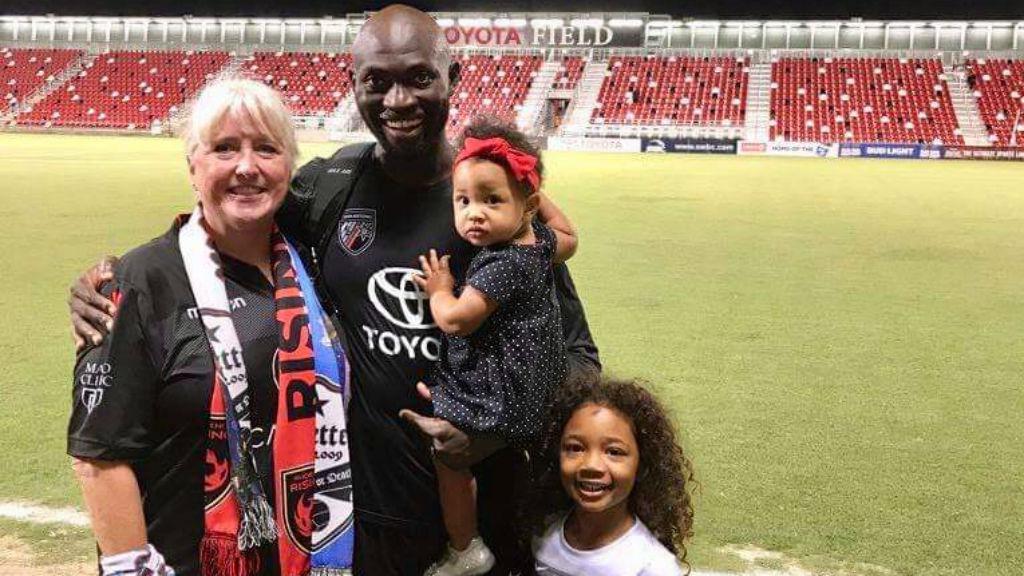 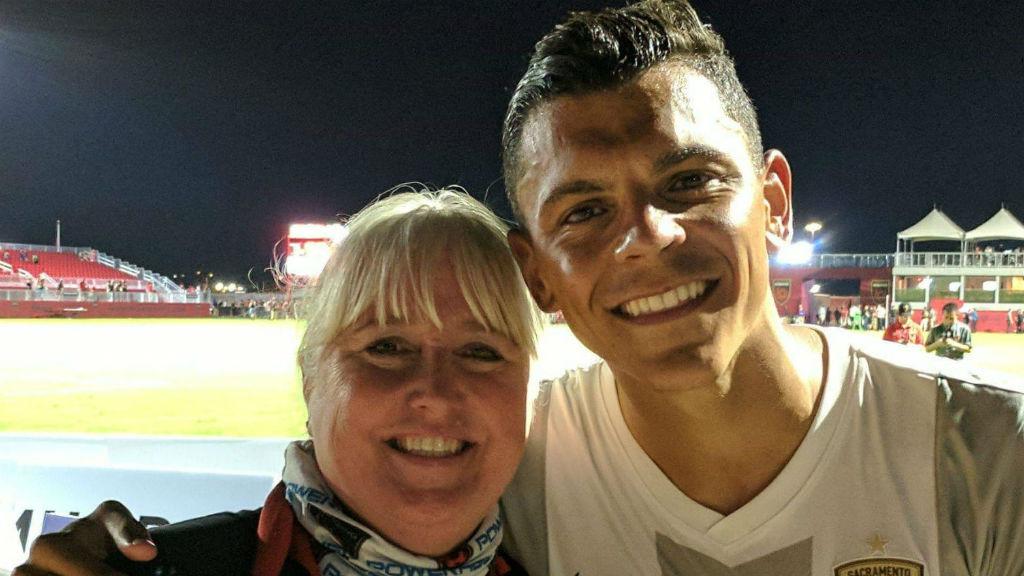 That passion and persistence has allowed McPherson to create some special relationships over the years and share those with her own family as well.

“[Doueugui] Mala and my grandson Noah, who is four, have the most amazing bond,” said McPherson. “When my grandson comes to the games, Mala will lift him over the stands and walk with him all the way around giving high-fives from my section literally it’s totally around the stadium. Then he takes him in the locker room, and he gets him some food and he sits there.

“They absolutely love each other. When they first met, Mala didn’t speak the best English and my grandson didn’t speak the best English because he was just starting to talk, and they went off, they were kicking a soccer ball, they had their own way to communicate, no one could say anything about it and those two are just absolutely precious together.” 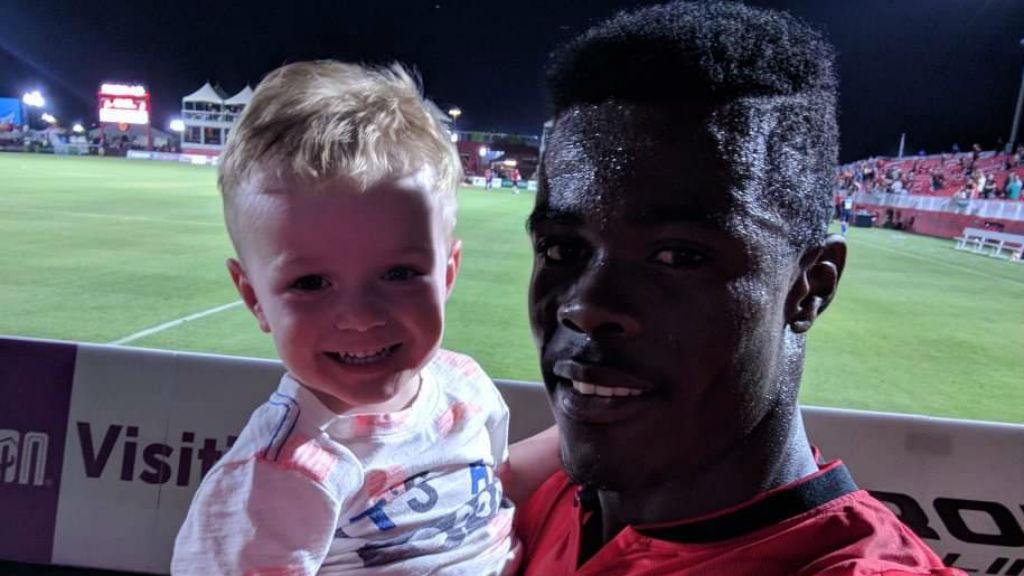 Relationships like that tell you all you need to know about how McPherson feels about her favorite team.

“They’re not just players for me, they’re family.”