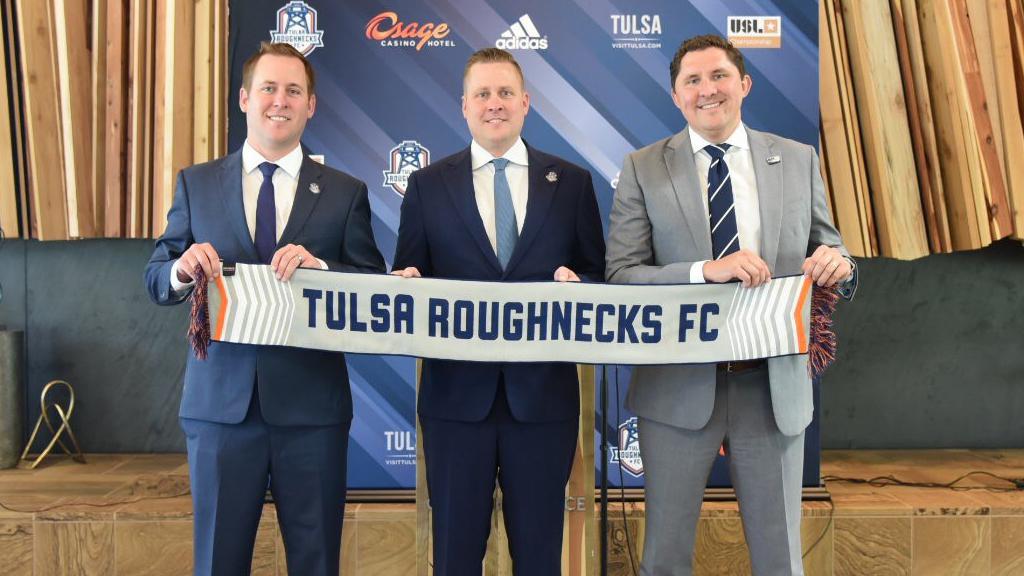 TULSA, Okla. – Tulsa Roughnecks FC entered a new era on Tuesday afternoon as the sale of the USL Championship club to Tulsa natives and brothers JW Craft, Ryan Craft and Kyle Craft was officially announced at a press conference in Tulsa.

The Craft family completed the purchase of the Roughnecks, one of the historic brands in North American soccer, on July 31 and now have the aim of making the club one of the leading organizations on and off the field in the Championship.

“My brothers and I have a passion for Tulsa and a passion for soccer,” said JW Craft. “We are committed to significantly increasing the investment in this franchise and to developing the Roughnecks into a team Tulsans can enjoy and be proud of for years to come.”

A member of the USL Championship since the 2015 season, the Roughnecks were previously owned and operated by majority owners Jeff and Dale Hubbard, co-chairs of the Tulsa Drillers, and minority owners Bob Funk and Tim McLaughlin, owners of Prodigal. The club plays at ONEOK Field in downtown Tulsa and is led on the field by Head Coach Michael Nsien, also a Tulsa native, having most recently reached the USL Championship Playoffs in 2017.

“We are very pleased to welcome the Craft family as the newest member of the USL Championship community,” said USL Executive Vice President, and Tulsa native, Court Jeske. “We are entering into an incredibly exciting period of time in this club’s history, and on behalf of everyone at the United Soccer League, we look forward to watching the club’s success on and off-the-field under the Craft family’s leadership.”

The Craft family indicated it would wait to make any major changes at the club, with the primary focus of the upcoming months to listen to feedback from Tulsa’s soccer community as to what it wants the Roughnecks to represent.

“Our first job will be listening to our fans and supporters, getting their feedback and suggestions,” said JW Craft. “We will begin by investing and improving in the gameday experience for our supporters as well as focusing on bringing in new fans.”

It is those fans that the Craft family will be looking to attract to ONEOK Field in the future as they look to elevate the club in local and national prominence, something the Roughnecks’ former leadership believes they can accomplish.

“We are excited to see the enthusiasm and passion that the Crafts have shown for taking soccer in our community to the next level,” said Mike Melega, President of the Tulsa Drillers. “They are going to be fantastic owners who will have the ability to put the type of entertaining and successful team on the field that Tulsa’s soccer fans deserve.”