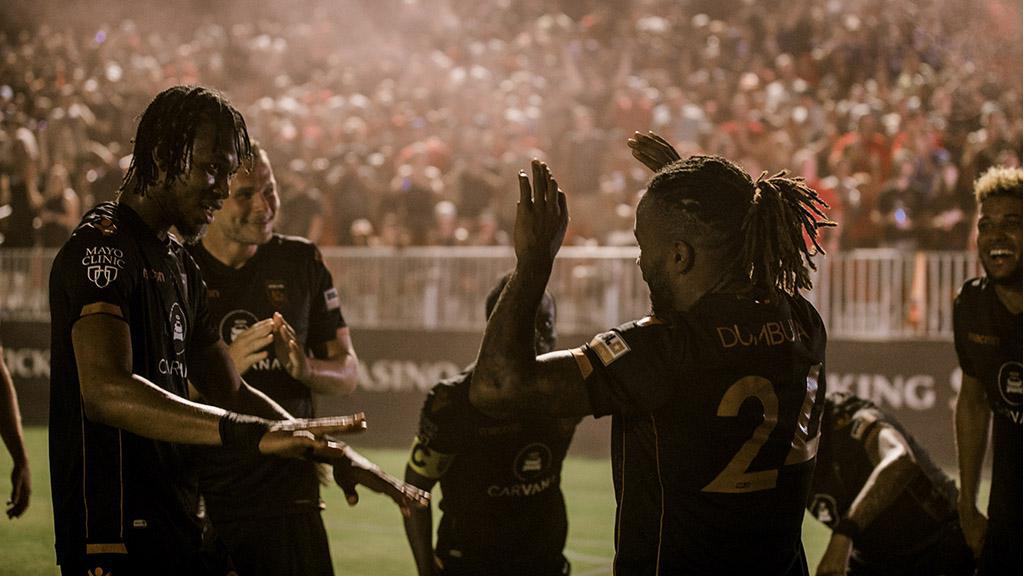 PHOENIX – With five minutes to go, and hosts Phoenix Rising FC leading visitors Reno 1868 FC by a pair of goals, the chant began to ring out around Casino Arizona Field from the Red Fury and Los Bandidos.

The legend lives on.

For the 13th consecutive occasion that the club has taken to its home field on $1 Beer Night – including every home outing on a Friday night this season – the defending Western Conference champion and current favorite to win the USL Championship Final took victory, this time in a 4-2 win against its closest rival in the conference standings.

Rising FC’s feat has been documented previously this season. It’s now being feted by Bud Light – which is now the promotion’s presenting sponsor, complete with the presence of the Bud Light Knight on game night – as “the greatest streak in sports history.”

With Bud Lights in hand, fans across Phoenix are celebrating the greatest streak in sports history. This is their story. @PHXRisingFC pic.twitter.com/lduiF0LpR5

OK. That might be overselling it a fraction, but there’s still something undeniable about the magic Rising FC produces in front of the sellout crowds that pack its home venue in what is on course to be a record-setting season in the Championship.

In the middle of that magic? It had to be Solomon Asante, who twice kept his cool from the penalty spot to help continue both streaks and in the process became the club’s all-time leading scorer. The Ghanaian’s 32nd goal in the Championship in Phoenix’s colors – which iced the game with 11 minutes to go after Reno’s Corey Hertzog had pulled Reno back within a goal five minutes earlier – saw him pass Chris Cortez for the club record.

“I told the coaches it's 14 in a row and 13 on dollar beer night, and we now have Solo as the career goalscoring leader for Phoenix Rising,” said Phoenix Head Coach Rick Schantz. “What can I say, this is unbelievable. You've gotta pinch me because this feels like a dream.”

It also moved Asante within a goal of Cortez’s single-season club record of 19 goals, set last season. Asante is now 8 of 9 from the penalty spot this season, doubling the total of any other player when it comes to conversions from 12 yards this season.

“I feel good taking penalties because it's not easy. You and the goalkeeper, the crowd, the pressure,” said Asante. “A lot of things are going through my mind. You don't have to lose this. If you lose it, the crowd and then I'll be down. It's a lot of pressure.”

And, maybe unlike other $1 Beer Nights that have seen the club claim lopsided victories previously this season, there was pressure on this night. Reno battled its hosts strongly, befitting of a side that remained in second place in the Western Conference at night’s end.

Trailing by a goal at halftime, 1868 FC came out brightly to start the second half and pulled level through Danny Musovski eight minutes after the break on a close-range finish, only for Phoenix to quickly respond with two goals in two minutes before the hour-mark, including Mustapha Dumbaya’s first for the club.

Hertzog’s 12th goal of the season could also have raised the stakes in the final 15 minutes if not for Asante quickly restoring Rising FC’s two-goal cushion, but the contest gave a potential taste of what a Western Conference Final between the two clubs could hold.

“The good thing that came out of this is that guys are completely bought in and the fight was there,” said Reno Head Coach Ian Russell. “We’ve got to get better, but I told them if you work as hard as you can I don’t care what the score is.”

“They are very good, very difficult to play against,” added Schantz. “Ian is a good friend of mine and he is doing a fantastic job. For us to pull out the win, I knew at 1-0 it wasn't going to be easy and you can see why they score a lot of goals as well.”

Next Friday will bring another challenger to Rising FC’s streaks with Sacramento Republic FC the side charged with trying to bring both to an end. Having taken a 3-1 victory in its last visit to Casino Arizona Field a season ago while earning a 0-0 draw when the sides met at Papa Murphy’s Park earlier this season, maybe Phoenix’s longtime nemesis will be the one to end the run.

But as Rising FC closed out the game, the echo of their supporters’ chant ringing around the stadium, it certainly seemed it will take a monumental effort to slow Rising FC’s roll anytime soon.

The world is 4.5 billion years old and some how you managed to exist at the same time as @BandidosPHX @PHXRisingFC enjoy it and you’re welcome pic.twitter.com/K0V4jDRDWM