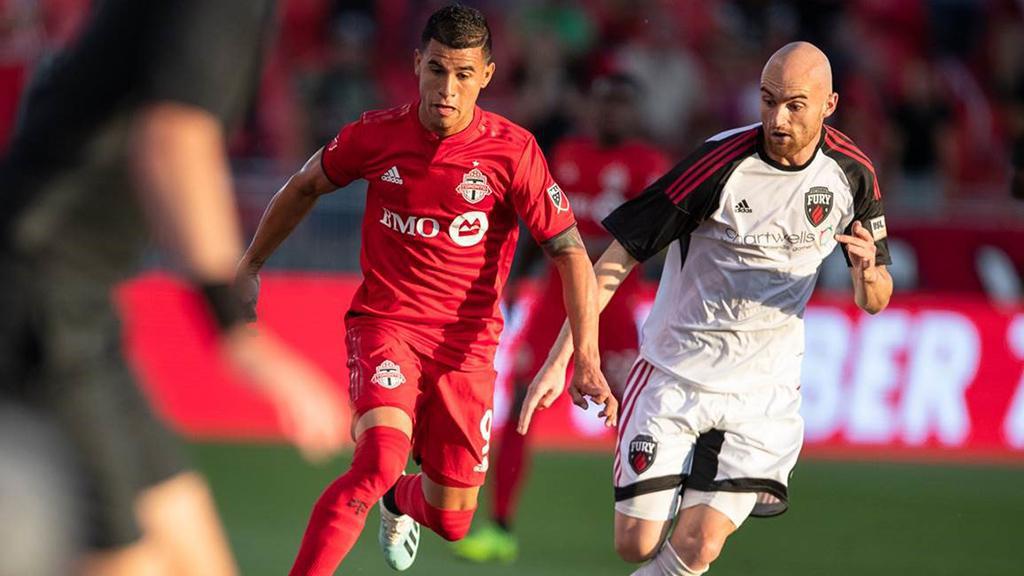 TORONTO – Nick DeLeon had two goals and one assist as Toronto FC advanced to the Final of the 2019 Canadian Championship after a 3-0 victory against the USL Championship’s Ottawa Fury FC at BMO Field on Wednesday night that earned a 5-0 win on aggregate over the two-legged series.

Ottawa had the first good chance of the game in the 13th minute as a low cross by Kevin Oliveira found Hadji Barry in close, only for his effort to be denied. A minute later, however, Toronto took the lead on the night and made it a three-goal advantage as Richie Laryea laid a pass from the right centrally for Nick DeLeon 15 yards from goal for a shot that picked out the left corner.

Toronto went close again in the 17th minute when Erickson Gallardo fired off target from the center of the penalty area, while Ottawa had a good chance to pull a goal back five minutes later when a low shot by Jérémy Gagnon-Laparé to the bottom-left corner was kept out by TFC goalkeeper Alex Bono.

Bono made a big save in the 25th minute as Christiano Francois got in behind the defense for a one-on-one chance but was unable to slot his finish past the goalkeeper on the break. Five minutes later, Ottawa goalkeeper Callum Irving was called on for a big save of his own as he kept out a free kick by Tsubasa Endoh to the top-right corner.

Toronto continued to press and was denied again when Patrick Mullins’ header was tipped over the crossbar by Irving off a cross by Liam Fraser. From the ensuing corner kick, however, Mullins tucked away a close-range finish off DeLeon’s feed after a header into the penalty area took a wild deflection off an Ottawa player to leave the defense flat-footed.

DeLeon then added his second goal of the night with a curling finish from 25 yards that picked out the bottom-left corner.

Ottawa created another chance four minutes into the second half as Oliveira had a shot from outside the penalty area saved, while midfielder Charlie Ward had a shot charged down just outside the penalty area five minutes later. DeLeon had a chance to complete his hat trick for the hosts in the 62nd minute only to shoot high and wide, while Mullins headed high four minutes later as the game began to wind down.

Fury FC had one final chance to find the net late on for a consolation goal, but Francois’ initial shot hit the left post from a tight angle before Gagnon-Laparé shot over on the rebound. A goal wouldn’t arrive, however, as Toronto FC advanced for a chance to earn its eighth Canadian Championship.