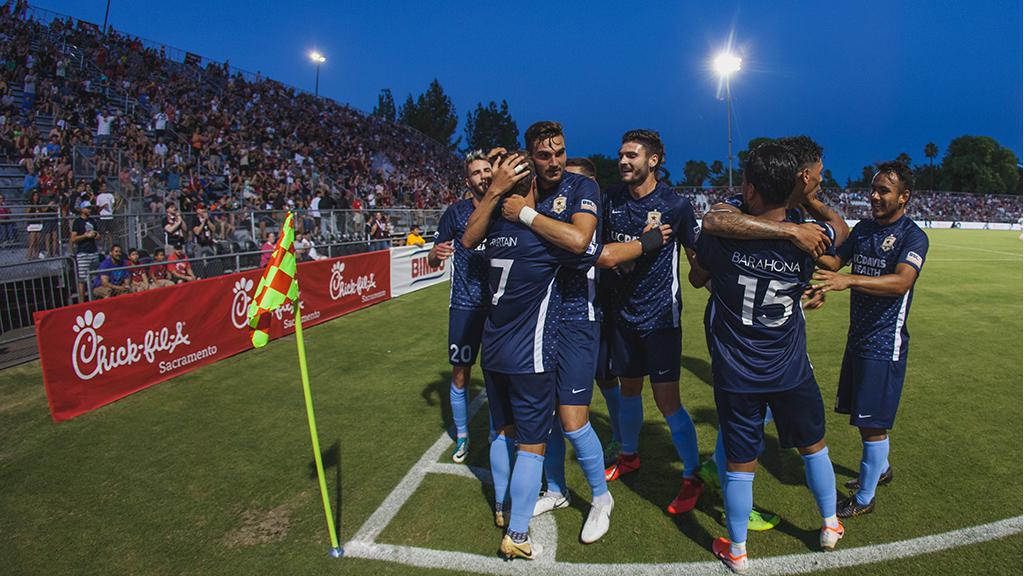 With as many wins as losses two-thirds of the way through its season, things haven’t gone to plan for Sacramento Republic FC so far in 2019.

But General Manager Todd Dunivant's move to acquire Thomas Enevoldsen from Indy Eleven this week should send a clear message to the club’s players, fans, and the rest of the Western Conference.

Fourth place in the standings – and a home playoff game in the Western Conference Quarterfinals – is up for grabs, and we’re coming to take it.

The inconsistency that has hit Republic FC has been a recurring trait in the middle of the Championship’s Western Conference this season. Outside the top three of Phoenix Rising FC, Reno 1868 FC and Fresno FC – all of which have produced impressive runs where they’ve won at least five games in a row, opening a nine-point gap between third and fourth place – winning streaks have been hard to come by.

That’s left a group of 11 teams separated by seven points between fourth and 14th place with varying degrees of potential to end up with a coveted home playoff berth. In the middle of that pack is Republic FC, currently in ninth place on 31 points but only three points behind the current holder of fourth position, Real Monarchs SLC.

In acquiring Enevoldsen, Sacramento is addressing the Achilles’ heel of its squad, which has averaged only 1.36 goals per game this season. While Cameron Iwasa has been his regular, reliable self with 10 goals this campaign, the side overall has been close to average – or below average – in key attacking categories.

Will it work? It’s got a serious chance. Enevoldsen may not have been prolific this season for Indy – which has undergone its own attacking facelift this week – with his five goals coming at a conversion rate of just 11.4 percent, but it’s hard to forget the success the Dane had a season ago for Orange County SC. The 32-year-old not only finished tied for second in the league with 20 goals, but also notched 10 assists as he played every minute of the campaign, regular season and playoffs.

That type of dual-threat is exactly what Republic FC needs to boost its productivity in the attacking third – Enevoldsen averaged 1.89 key passes per game for Orange County on top of his prolific strike rate – and make a serious run at the sort of finish that was expected of the club this preseason.

And regardless of whether it works or not, it’s the sort of move that Dunivant should be commended for making.

Dunivant looked at the state of things surrounding his squad and saw a group that needed an injection of confidence in front of goal. In going and getting one of the Championship’s Most Valuable Player finalists from a season ago, he’s sent a message to the rest of the locker room that he believes this side can still reach the USL Championship Final.

With a visit to Western Conference leader Rising FC on the horizon after Saturday’s home clash with Colorado Springs Switchbacks FC, there won’t be much time for Republic FC to get its great Dane up and running for the biggest remaining test of its regular season.

But the road to the postseason starts now for Sacramento as it looks to add another title to its trophy case.