ARLIA: With Defense Sorted, Nashville In Line to Peak at Right Time 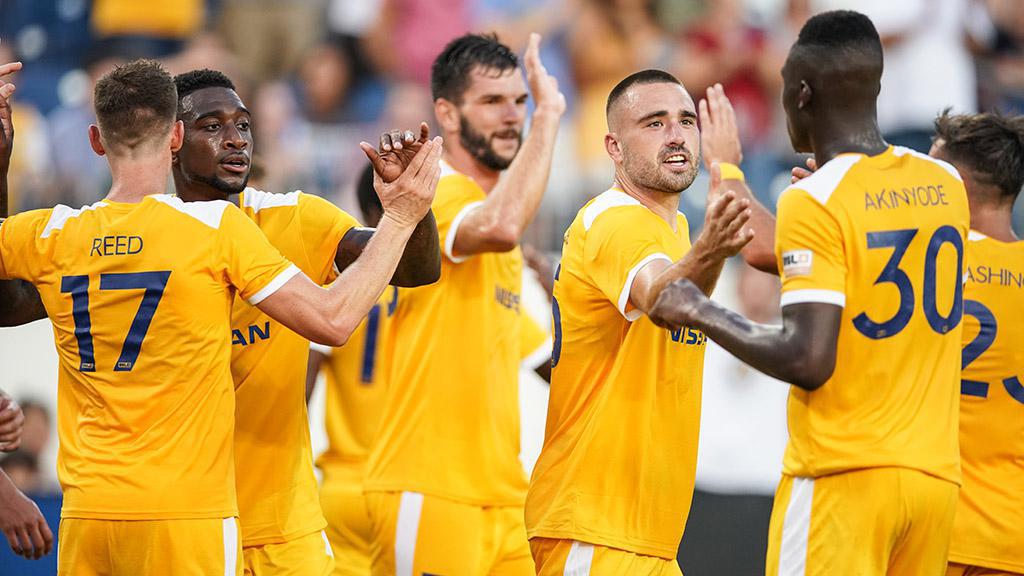 After watching his team concede twice in the final 25 minutes of a 2-1 defeat to rival Louisville City FC at Slugger Field on July 6, Nashville SC Head Coach Gary Smith was far from pleased.

“We’ve got a lot of work to do,” Smith said at the time. “The standards that are being set at the moment are nowhere near good enough, not for this group. I think the guys realize that. I don’t think it’s for a lack of effort, but at this precise moment in time, there are too many players that are dipping below the standards that should be expected from the players we have.”

Nashville had just completed a four-game stretch with back-to-back road losses against Louisville and North Carolina FC, which followed a 3-3 home draw with Ottawa Fury FC and an unconvincing 3-2 comeback victory over expansion side Hartford Athletic.

NSC’s defense, which had conceded just four goals in its seven games prior to that stretch, was starting to become unglued. The degree of those defensive issues may have been masked a bit by the 2-1 scoreline in Louisville – aided by Luke Spencer’s header off the post and Magnus Rasmussen’s penalty miss – but it was clear to Smith that something needed to change if NSC wanted to compete at the top of the Eastern Conference.

With 11 days until the club’s next game against in-state rival Memphis 901 FC, Smith took the opportunity to raise the standard of his squad by bringing in fresh blood. Vinnie Vermeer returned briefly from his loan spell with Las Vegas Lights FC and center back Jimmy Ockford joined on a short-term loan – later extended for the duration of the season – from Major League Soccer’s San Jose Earthquakes.

After Ockford made an immediate impact by scoring the game-winning goal in NSC’s 2-0 victory over 901 FC, Smith continued his midseason dealing by bringing in 2018 Championship Defender of the Year Forrest Lasso on loan from FC Cincinnati.

In three games with Lasso and Ockford paired in the center of defense, Nashville has yet to concede a goal and has allowed only six shots on target. That isn’t to say there haven’t been some close calls – like Alex Dixon’s penalty miss late in Wednesday’s 4-0 victory over Hartford Athletic – but Nashville enters Saturday’s contest against Bethlehem Steel FC at First Tennessee Park (8 p.m. ET | Match Center | ESPN+) with a club-record shutout streak of 376 minutes.

That, along with the four consecutive victories that have accompanied it, have propelled Nashville up to third place in the Eastern Conference standings as we get set to approach the final third of the season.

And there’s reason to believe that NSC can still get better from here.

While the defense is looking set for the stretch run and beyond, Smith’s squad has yet to reach its offensive potential. Offseason signing Daniel Rios, who has scored in five straight games and leads the team with 15 goals on the season, has made good on his promise to come and compete for the Golden Boot as he sits tied atop the Championship’s goalscoring chart with Phoenix Rising FC’s Solomon Asante.

But the duo he arrived with over the winter has yet to shine in the same light.

Cameron Lancaster, who claimed the 2018 Golden Boot with a league record 25 regular-season goals for Louisville, has been limited to just 12 appearances through injury. When he’s been on the pitch, the 26-year-old has been effective with five goals and an assist, but he just hasn’t been available for selection often enough to be counted on or to develop a productive partnership with Rios up top.

Kharlton Belmar, though billed as the third star of NSC’s offseason trio of additions, hasn’t exactly delivered on expectations either. Unlike Lancaster, he’s been a consistent presence in the lineup – appearing in all 22 of Nashville’s games – but has produced just a goal and three assists to this point.

Despite the underwhelming performances from that pair, Smith’s side has scored 41 goals so far this season – second-most in the Eastern Conference – and just one off the total of 42 regular-season goals it managed a year ago with 12 games still to play.

While it’s no certainty that Lancaster will get back to full fitness or top form over the next two months, Smith and Nashville fans everywhere can dream of pairing this upgraded defense with an even more high-flying attack come playoff time.

And if it happens, that will be a nightmare for the rest of the Eastern Conference.