ARLIA: Record Winning Streak is Nice, But Rising FC is Hungry for More 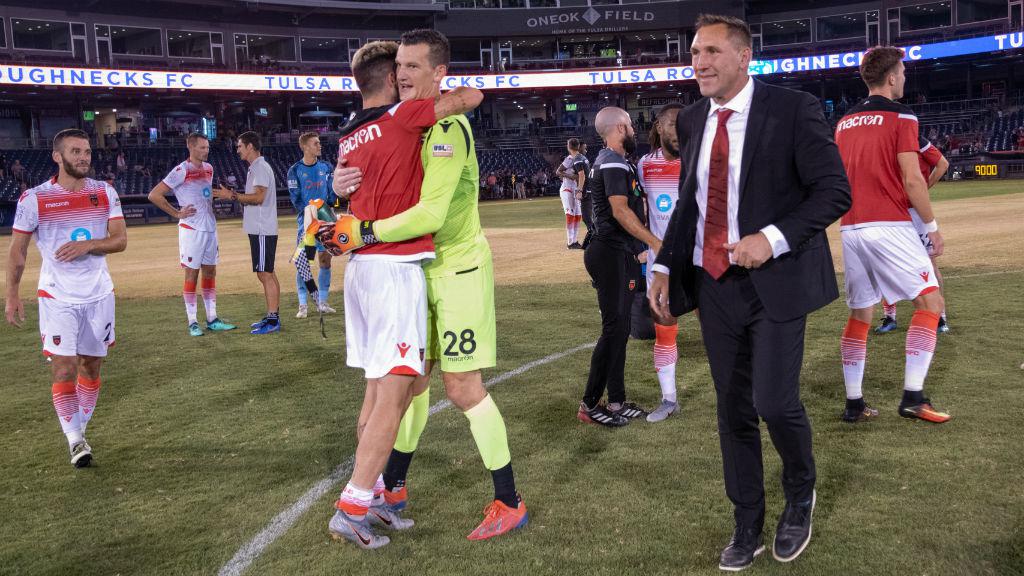 In the moments after referee Eric Tattersall blew his whistle to finalize Phoenix Rising FC’s 1-0 victory over Tulsa Roughnecks FC on Saturday night, there was nothing to indicate that the visitors to ONEOK Field had just made history.

There was no celebratory dogpile. No players running to the sideline shirtless. It was business as usual.

Sure, there may have been a few fist pumps from the game’s lone goalscorer Kevon Lambert and plenty of hugs exchanged between Rising FC’s players and technical staff, but even post-game team photos are a weekly occurrence for this group.

Another weekly occurrence for Phoenix over the past two-and-a-half months?

Saturday’s subdued celebrations – out of respect for a Roughnecks side that made things difficult for Rising FC over 90 minutes, or otherwise – showed just how far the club has come over both its Championship record-setting 11-game winning streak and the past two-plus years since its rebrand.

After missing out on the postseason in each of its three seasons as Arizona United SC, Phoenix’s rebirth has seen it rise to new heights in every facet and turned success into an expectation rather than a goal.

That change in philosophy is paying massive dividends.

Off the field, the club has captivated the Phoenix sports market with 13 consecutive sellouts at Casino Arizona Field, while also making waves nationally with its 12-0-0 record on $1 Beer Night and overseas with the presence of Chelsea FC legend Didier Drogba and partnership with Turkish giant Galatasaray SK.

On the field, Head Coach Rick Schantz’s squad has made the playoffs in back-to-back seasons – including finishing as runners-up to Louisville City FC last year – and could rewrite the Championship Record Book in 2019 on its way to topping the Western Conference.

Rising FC currently boasts a goal differential of +36 – better than the nine other current Western Conference playoff teams combined (+35) – and looks a sure bet to surpass the league record of +40 set by the New York Red Bulls II in their 2016 title-winning campaign. And after besting FC Cincinnati’s 10-game winning run from last season, Phoenix will now put FCC’s league record for points (77) in its sights as it presently sits just off the pace (74.8).

Yet with all the accomplishments that Rising FC has achieved over the past two-plus seasons, the most telling detail of the club’s philosophical shift is its hunger for more. Just listen to Schantz after his side claimed its 11th consecutive victory.

"It’s an unbelievable feeling,” Schantz said via a club statement. “So many amazing players and teams have been in the USL. To be in the record books is an honor for the club, players, fans, and staff. For me, it’s motivation to keep pushing our players."

That last bit is what makes the difference between a good team and a great team. Despite winning 11 straight games and sitting atop the Championship standings, Rising FC isn’t satisfied.

And while records like this provide nice targets and milestones during the grind of a 34-game regular season, Phoenix has had its eyes on one prize and one prize only since falling at the final hurdle last season – a championship.

And it won’t truly celebrate until it gets one.